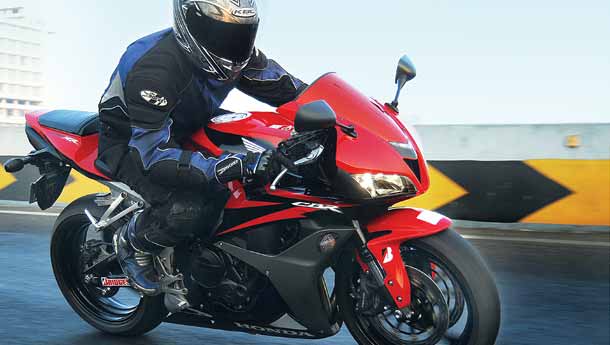 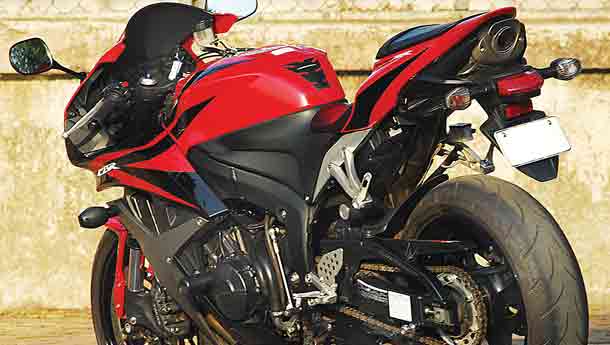 40 or even 160 kph on a sporting 600cc motorcycle is no trouble at all. Any one of them (sporting or otherwise) can handle that. The thing is that this 2007 Honda CBR600RR, with me in the saddle, is flying along at that speed with no apparent effort. What is raising my eyebrows is the fact that the rev counter is not showing the sort of numbers I think are appropriate. I’m also surprised at how rapidly we’ve gotten to this speed, especially given that I’ve been short shifting. But if you knew a little bit about the 2007 CBR6, you wouldn’t be surprised at all. Let me explain.

In the September of 2006, it was widely accepted that the 600cc Supersport machines were amazing pieces of engineering and design. Even more so than the superb 1000cc motorcycles because of the sort of performance they were offering. Further, it had been accepted quietly that a 14,000 rpm 600cc four could not be expected to produce 120 bhp, and offer reasonable torque for day to day use also. No one questioned that. The hardening focus on track-friendly packages was accepted as a fait accompli of sorts. And the fact of the matter was that all the reviews said the same thing. 600cc motorcycles were stunning on the track, had phenomenal top-end gusto. And all of them lacked torque at reasonable revs which made them painful to ride in the daily situation. This, as an idea, was perceived as normal. The more technically inclined reviewers took one step forward and claimed that useful torque and eye-opening horsepower was the preserve of high technology. A playground where variable valve timing, variable lift or variable intakes would be the only way to straddle the gap. Then Honda launched the CBR600RR.

At first glance, it seemed interesting, but more of the same. You see, until 2003, Honda’s CBR600 was the cornerstone of versatility in the sportsbike segment. Short of doing the dishes and then tucking you in with a kiss on the forehead, the CBR could, literally, do everything. In 2003, Honda decided to extended their traditional Supersport Championship domination by creating a motorcycle that was created for the track first, and then adapted it to street use. And that’s how the game was played till the 2007. Buzzy, razor-sharp CBR6s that earned kudos at the track, proved hard on you off it (although still less so than the competition). Still great, but hardly as versatile as before. With each passing year, the raging top-end robbed the midrange, and despite wins in the series, the CBR wasn’t looking as hot as the competition. Like the unashamed track refugee that was (is) the Yamaha YZF-R6, like the clearly focussed on the track Kawasaki ZX-6R, or for that matter, fast but friendly, streetable Suzuki GSX-R600.   On paper, the 2007 model had very few things to say. In numbers terms, it was a whopping 9 kg lighter. Honda had finally stacked the crankshaft so that the engine components lay in a compact triangle.That, and the lighter crankshaft, magnesium head cover and all combined to create a 1 kg lighter motor, that turned out to be the smallest, most compact power unit in the 2007 line-up. In the process of compacting, the charging circuits went on a diet, as did numerous components. In fact, keeping the bore and stroke of the 599cc engine the same, Honda changed every single thing in the motor. The end result was an engine that produced the same amount of torque 250 rpm higher and made a measly 3 bhp more at the top. No matter, the engine had 9 fewer kg to push around, didn’t it?

On the chassis front, Honda made a raft of changes. The matte black swingarm became longer, and was cast as a light, one-piece U-shaped job. The frame itself, earlier made of eleven bits, was recast to require four high-quality castings of lighter weight and greater strength. The nose fairing was smaller and moved back an inch for great weight centralisation. Honda explains saying that since the weight is closer to the CG of the bike, its inertial impact is lower. The Honda also lost about an inch off the wheelbase and tucked the steering in a bit. Even the trail was cut down a bit. With RCV firmly on the inspired-by list, the Honda relentlessly pursued performance and weight goals. So the air intake came into the centre, the fairing panels were split up into two lighter looking units – which evidently work the passing air into allowing easier side-to-side flicks at speed. The engine cases came back out into the public eye. Perhaps the only things that went through without any major changes were the radial brakes and the suspension – adjustable USD units up front and the RCV-inspired Unit Link monoshock at the rear.

And there’s just a little bit more at the technical end to speak of. While all of the competition now offered slipper clutches, Honda took an alternate route. In the larger airbox, Honda added what they call the IACV, Intake Air Control Valve. The little valve allowed the ECU to trigger far smaller changes in the airflow than normal. This had two effects. The system would smooth the transition from a closed throttle to an open one. It would also take some pressure off during downshifts to help. Not a slipper clutch, but better than not having one. Finally, Honda tweaked the PGM-DSFI. Yes, that’s the usual Honda fuel injection system, but now working dual stages for smoother power delivery. Many wondered, after looking at the initial information, if the 9 kg and 3 bhp would be enough.

Then they rode it. Just like I did. The 2007 CBR6 is a quiet motorcycle. The outgoing model was pretty raspy even in stock form, and the quieter engine hum is immediately noticeable. Rolling off requires no extra revs, since the 2007 model is geared one tooth down and makes more torque at lower revs. This little nugget is the key to this machine. Roll off gently and progress grows rapid even as you sweep past 5,000 rpm, which is almost considered idling rpm for the average 600. By 7,000 rpm, the CBR600RR will dilate the pupils momentarily before the incredible lunge begins. At 11,000 rpm, you aren’t even at the 118 bhp horsepower peak, and will already be travelling with incredible ferocity towards a powerpeak that is still an astonishing 2,500 rpm distant and a redline is just beyond the horizon at 15,700 rpm!   And then, and only then, will you have the perceptive faculties kick in to notice that the once quiet motor has broken the dam, screaming furiously notes that come straight off Mars, by Gustav Holst. An angry orchestra of intake roar, exhaust growl and engine rumble. This is a superbly easy machine to ride hard. No lumps in the powerband, no complains of any sort. Serious, eye-watering power whenever, wherever you choose to open it up. After one run all the way to the fiery end of the revcounter, you will realise how Kenan Sofuoglu won the World Supersport champion on this bike, winning ten of thirteen races, accumulating more than twice as many points as the poor sod who rode the wheels off his machine to take second place.

It isn’t just the engine of course. The engine redesign, longer swingarm and lighter weight make it an effortless handler as well. It feels crisper and stronger in corners than the 2006 model and for all the steering geometry and wheelbase changes, it isn’t any less stable. The new electronic steering damper takes a lot of credit and is as good as technology gets – totally transparent. You don’t even know it’s there. Brakes are superb and I could write pages upon pages telling you how the 2007 CBR600RR has better ride quality than any other sporting 600 you can think of. How do Honda do it?

After almost two hours in the saddle, I also noticed that unlike the R6, the CBR6 ergos are reasonable. The bars are higher, the faux tank is lower (more space to tuck in if you want to), the bike itself is slimmer and the seat is actually very comfortable too. As in all this and comfort too. This is an incredibly well-thought through machine. Honda truly deserves all the praise this motorcycle earned it.

In the space of a four-page press release, they turned practically every concept that the 600cc sports motorcycle community accepted without question on its head. The CBR600RR builds from the traditional Honda strengths of fantastic quality and finish and takes it places. There’s torque, practicality, attitude and performance, all in one compact package.
Oh yes, I almost forgot to mention. The 2007 styling is all new. In the flesh, it is an impressive motorcycle to cast eyes on, more so than any CBR600 I can recall. It’s compact, crouched purposefully and looks very neat. Not day-after-tomorrow like the R6, maybe, but definitely tomorrow in a crisp manner. Ladies and gentlemen, say hello to the best CBR600RR that Honda has ever created.