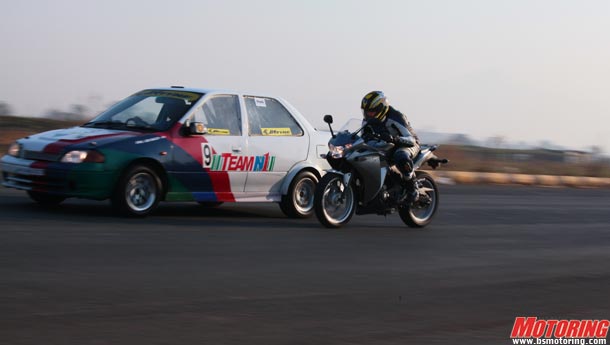 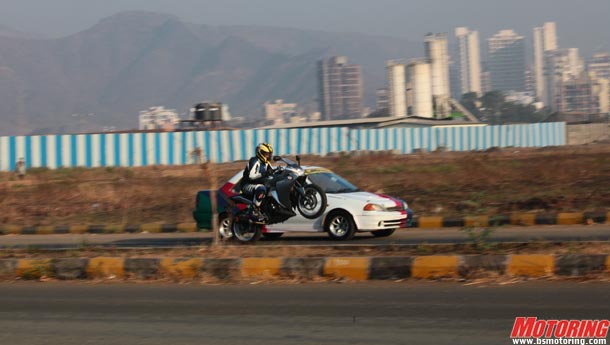 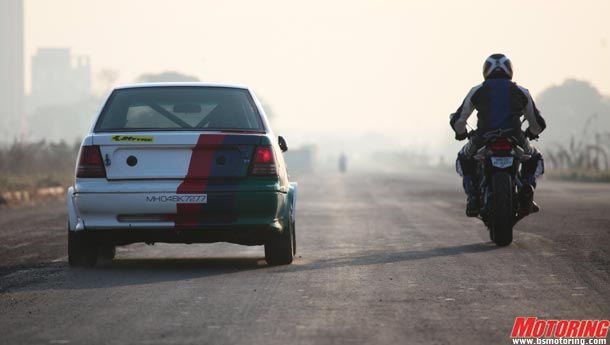 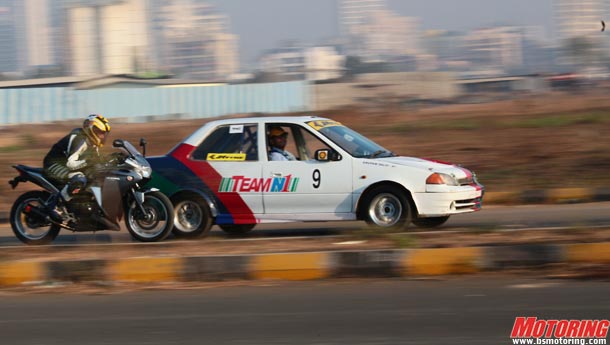 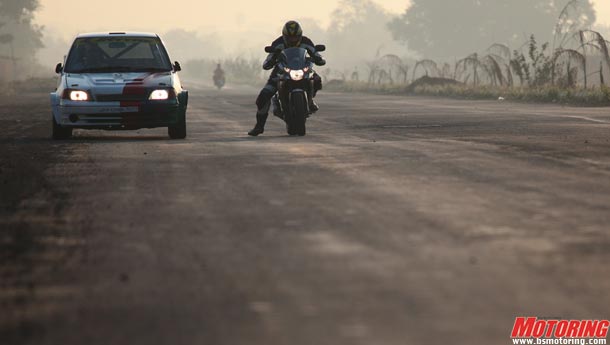 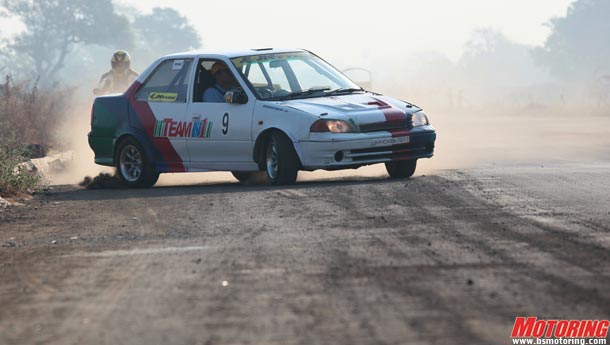 I’ve been very vocal about my fondness for Honda’s CBR 250R and I think it’s a quick, fun motorcycle to ride. So when Malcolm (remember him from the Impulse road test pics?) mentioned a CBR 250R the Performance Racing Store guys had worked on, I knew I had to ride it, especially since I’d only recently spent much saddle time on a stock CBR 250R. The original plan involved getting another 250 bhp Honda car along, but then I’ll also have to tell you that I’m lying. Because the original plan was to gag Meherzaad (the owner of the CBR) and then make off with his painfully loud motorcycle. What about the Esteem? Well, I think it was a phenomenal car for its time, with a really good engine, quite-nice features and was as hefty as a pair of sunglasses. Of course, I failed to fathom why Maruti Suzuki thought it needed the entire expanse of the boot-lid for a brake light, but it looked great, and I liked it. A lot. Not so much, though, as...

The N1 Esteem, we were told, was even louder with its race-spec exhaust. So the thoughtful guys at N1 Racing Equipment decided to run a milder exhaust for the day of the shoot, so as to avoid attracting too much attention (can’t say that worked, can we?). To get to the point a bit quickly, a stock Esteem (1.3-litre, fuel-injected) takes 5.37 secs to 60, 11.93 to the ton and has a top speed of 165 kph. This Esteem, worked on by N1 Racing Equipment, does a rolling burnout over all those figures. To rewind a bit, when I first took a look at the Esteem’s interiors, I was taken aback. It is stripped down to its bare bones and apart from the racing steering wheel, three MOMO pedals, standard stalks, instrument cluster and one Sparco racing seat (the co-driver seat was just thrown in for temporary usage), there was nothing in there to point a finger at. In one sentence, the interiors were ‘lots of exposed metal flooring, a roof, some pillars and a roll-cage’.

Getting into the Esteem isn’t so much of a task (that’s saying a lot, since I drove it with my motorcycle leathers and boots on!), and once you’re properly strapped in, all you need to do is flick a few toggle switches and push the soft-rubber button that brings the car to life. A buzzing, if only slightly impatient, note emerges from under the FRP hood. I stepped on the throttle a couple of times to get a feel of the pedal sensitivity and was immediately introduced to a very Suzuki engine note, albeit something that suggested ‘a lot of work had gone into it’. In the next few moments, I had shifted through three gears, with the speedo hanging close to a speedo-indicated 130 kph. At this point I was sort of holding on to the tiny steering wheel for life, and then braking. Rather, I wasn’t. It’s not that the brakes aren’t powerful, no. But because the car weighs roughly 700 kg, it’s so volatile, you need to have nurtured faith in the car’s mannerisms before slamming on the brake. So I decided not to brake and rammed straight into a wall at 120 kph. Okay, kidding! Almost all the panels are made of FRP and because the only noise-insulation bit was the windscreen, my ears were asking me what they had done wrong to receive such tremendous torture in the expanse of one morning. But that’s only because they hadn’t been subjected to...

On the loudness scale of ten, the CBR would score a twenty. However, while it is loud and talkative, it isn’t entirely brash. There is a rhythm it settles into and you just have to find it. Usually, ‘throttle wide open’ works best. I don’t suppose your neighbour is going to be too fond of you if you own one of these, but trust me, at 10,000 rpm, you can’t hear your neighbour scream. Or can’t be bothered to, definitely.

To take you, step by step, through what makes this CBR so special, let’s begin at the exhaust unit. Made by Akrapovic, the end-can is a slip-on affair and the header and bend pipe are sold as a separate unit, and while it would be hard to tell you what sort of airflow redirection happens inside the exhaust, let’s just say it adds roughly 2 bhp to the scene, while making the CBR at least 7 kg lighter. On paper, this sounds like peanuts, but in real world performance, the difference is very, very apparent. The weight reduction, which is in fact a supplementary function of the exhaust unit (after power boost and better breathing), immediately reflects in the willingness of the CBR to steer. It falls into corners more easily and is generally a more agile motorcycle than it naturally is.

And then, thanks to the Power Commander and the Dynojet fuel controller, which let you map the engine as per your demands, with the latter adjusting the fuel mixture, again, on your input, there is an encouragingly amount of acceleration to deal with. A stock CBR gets to 60 kph in 3.5 secs, 100 kph in 8.9 secs and has a top speed of 145 kph. This one shaves roughly a little more than half a second to sixty, approximately two seconds off the run to hundred and the top speed is now in the sub-155 kph zone. Also, although this is more of a seat-of-the-pants statement, the 80-120 kph run is now much quicker, which is saying a lot, since a stock CBR is anyway rather good.  That’s (because I’m lazy to talk in percentages) a lot of go for all the dough.

Since my obvious pick would be a motorcycle, the answer is that! However, to be very honest and logical, I’ll say the Esteem is evenly matched. At the flywheel, the Esteem returned an impressive 127 bhp reading. On tarmac, with a 20 per cent approximate power loss at the wheels, it results in the car nudging 100 kph in under eight seconds, with the car running out of breath at 180 kph (could have been more, were it not for the close-ratio ‘box). In terms of substantial development, the Esteem scores higher, but then the CBR 250R was just naturally that good in the first place. Call it even, then? Not a chance! The CBR wins, but only by a very small (and very personal? – Rohin) margin.

ESTEEM - WHAT IT’S GOT

Akrapovic full-system exhaust
Dynojet fuel controller
Power Commander
An extra cylinder from another CBR. Kidding, of course!
IS IT WORTH THE DOUGH?
No. It’s quicker, faster, louder, lighter. Why would it be worth it, right? Silly question!
AT A PINCH
You could try dismantling the fairing as a weight-saving measure. Also, Akrapovic does make just an end-can too, so if you’re on a budget, go for it. Obviously, the results won’t be as impressive.
IN A WORD
Faster!