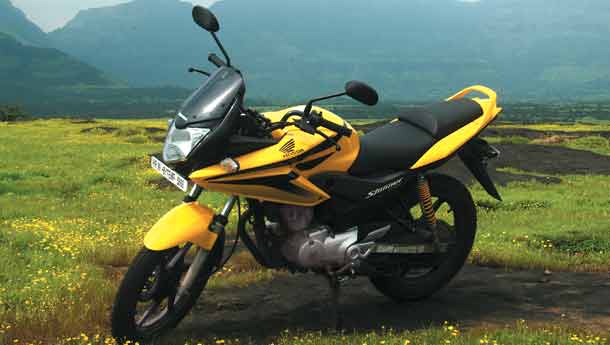 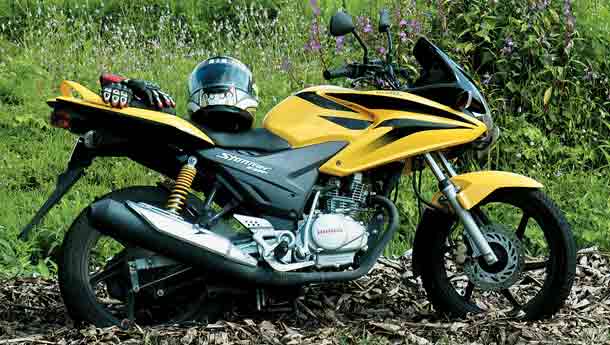 The Honda CBF Stunner’s trip meter showed that we were about 100-odd kilometres away from Mumbai. A bunch of good friends – Kiesler, Vikas and Lalit – on their big brawny Enfields for company.

The traffic was scarce, the air was cool and the near-faultless tarmac ahead was dry... ahh, perfect!
I decided to lag behind in order to stop to take photographs and told the others ride on ahead. After a few kilometres, I saw Lalit, standing at the side of the road, flailing his hands wildly in the air to catch my attention. He wanted me to pull over to join the gang for tea. I stopped the bike, dismounted and walked towards the little roadside shack. After graciously accepting the cup of tea from the gleeful shop owner, I turned around to look at the bike. Wait, where was the bike? The Enfields were there all right, but I couldn’t see the Stunner. The spot where the bike was parked was now packed with a horde of people who had materialised out of nowhere. Anxiously, I walked towards the crowd, and there it was, surrounded by the curious bunch, being prodded and poked by some twenty hands. Then, a few from amongst the group saw me approaching and all the heads turned.

‘Is this your bike?’
‘Er, well not mine exactly, but yes, I have the keys to it for now.’
‘Is it an imported bike?’
‘No, it isn’t.’
‘Can you race a Hayabucha with it?’
‘Hmm, I could try but I don’t think I can come out a winner in such a duel.’
‘Is it a 1000cc motorcycle?’
‘Nopey, it’s a 125cc.’   When they heard that, they suddenly burst into a cackle and slapped me on the back and walked away, telling each other how humorous city folk like me are and how we assume that people who live in villages are ignorant. In a few moments, I’m left alone with the Stunner and turn around towards my friends. Their jaws are dropped open in disbelief.

You see, at the crack of dawn, I rode to the petrol pump where the rest of the gang was waiting. They were bewildered to see somebody like me, who’s usually astride my Enfield when we head out touring, on a 125cc. They simply didn’t believe I was going to ride 330 km through the day on the Stunner, while they would be on their big-bore Enfields. I am sure it was politeness on their side that stopped them laughing in my face.I had been well acquainted with the Stunner in the city but hadn’t spent time with it on the highway. This ride was a great opportunity to do just that. I looked at the bright yellow-and-black motorcycle beneath me, smiled at the apprehensive bunch staring at me and proceeded to fill fuel. But now, at this tea shop beside the highway, they seemed to see the Honda in a whole new light... was that envy in their eyes? Who said 125ccs can’t be competent tourers and come out looking good too?

After being done with the tea break, we headed back to the road. The Stunner is extremely composed on the highway and oncoming trucks and the occasional crosswinds don’t deter it much. The pace is brisk though it’s definitely not fast. From standstill, the CBF picks up speed quickly and I kept going through the gears till I hit fifth. And I kept tapping at the gearshift pedal, hoping a sixth cog would magically appear onto the gearbox mainshaft to keep the pace, but alas, that was not to be. After about 65 kph on the speedo, however, the engine lets you know that it’s beginning to work extra hard and gets pretty vibey – enough to send tingles to your feet and fingers through the foot pegs and the handlebar grips.

Then, in the distance, we saw what we rode all this way for – the mountains and the wonderful twisties that go with them! The winding mountain roads are the roads that I yearn for, especially since I ride through grimy city traffic every other day. We hit the curves with a vengeance, making most of the smooth paved tarmac and the clean corners. I must admit that I’m not much of a ‘peg scrapping’ addict, but the Stunner was simply stunning around the bends. It’s so composed on the curves that I did manage to somehow graze the left peg once. The CBF held its line impeccably, although a little more grunt would have been very welcome. The near 11 bhp and 1.12 kgm of turning force at 6500 revs is what you’d expect from a 125cc single-cylinder motor. The engine is pretty refined, but how I wished it came with a tacho.   My friends were a little taken aback to see me gun the throttle of the Stunner – far from the calm and composed riding style I normally adhere to. But that’s what the pretty yellow 125 does to you – it makes you push it harder and harder. However, when you do need to kill speed, the brakes feel very reassuring and capable. The front brake returns great feel but the brake pedal tends to get a little pulpy.We stop midway on the ghat at a temple carved into the rock face, for yet another round of tea and to take in the view. By now, I was getting used to being pointed at, and curious heads usually popped out of the windows of wheezy SUVS filled till the roof with picnickers, to catch a glimpse of that yellow streak that just went past them. Here, at this peaceful place, is this man paying his respects to the caretaker of the mountains, the deity who is ensconced comfortably in the temple. And while he is mumbling his prayers, his gaze is over his shoulders, towards the Stunner. Maybe he managed to slip in a quick request to the Almighty for a brand new Stunner, but that I shall never know for sure.

By noon, we reach the MTDC resort at Malshej, with voracious appetites. After devouring the chicken curry, the dal fry and the egg masala, all of which tasted the same with the same coloured gravy, the guys decided to catch a snooze or two. I however went on to explore the vast openness that surrounds the resort, obviously on the Honda.Over mud and damp ground, the Stunner’s TVS rubber was pretty adept and didn’t give me the feeling that the next blade of grass was going to land me onto the ground, face first. The suspension coped well too, soaking in the bumps with ease. The telescopes at the front and the twin shocks at the rear managed well, but returned a very hard ride over the uneven surface. However, on well-paved tarmac, the suspension was quite sorted. The footpegs didn’t buckle when I rode standing on them, which is great, considering my not-so-average proportions. After playing around for some time and going berserk with the camera, I realised that it was time to head back home already.

I get back to the resort, to find the guys looking around frantically for me. You see, there isn’t much mobile phone connectivity in Malshej and although I love that feeling of being alone, my city slicker friends didn’t share my sentiment. We pack up our stuff, bundle it onto the bikes and gear up, just in time to see Kartik Ware arrive with a few of his friends from Autocar India – what a coincidence! (As you can see in a few places in this issue, Kartik is with BSM now) We say our hellos and then our goodbyes within a few minutes and then head back home.Getting closer to the city, it looked like every car owner around had decided to get his vehicle out onto the road, causing a huge traffic snarl. For the last 40-odd kilometres, we were stuck behind the bumpers of four-wheeled traffic and the Stunner shone yet again. It quickly shifted from its newfound tourer mode into its usual city crawler form with ease – in the latter mode, the early arrival of torque combined with its nimble handling help make it a cool city slicker. Seriously, I was impressed with the Stunner’s effortless double role.

I got back home at nine in the night, without even a hint of any aches or sore muscles. Vikas stays close to my house and I arrived at his doorstep after dropping off my bag at home. ‘What are you doing here? Aren’t you tired?’ he asked. ‘Nope, I’m as fresh as a daisy. Let’s go for a short little ride to Bandra and grab some coffee,’ I reply. He slammed the door on my face. I couldn’t help it, I just can’t seem to get enough of this motorcycle.