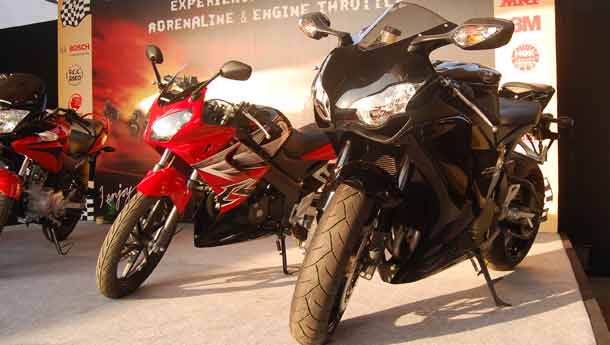 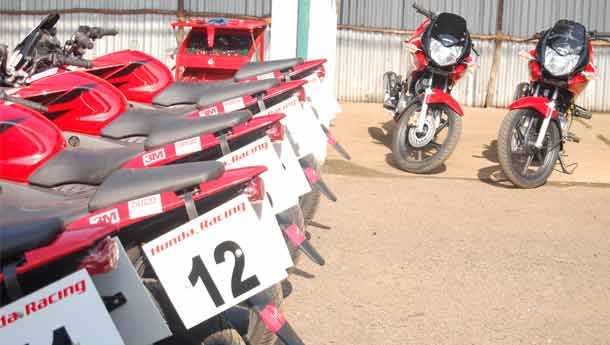 1.28.602. A figure that is now forever etched into my mind. What is it? My very own fastest lo trap of the short loop of the Sriperumbudur circuit. You have to admit that there is something about the sight of a motorcycle being ridden at the limit by a leather-clad rider that makes one’s hair stand on end, no matter how long it is. And that’s on television, since I had never been to a race track.

So, when Honda invited us to attend the three day Motorsport event at the MMST track, I was packed off to get my very first taste of enclosed, pristine tarmac. Er, not very literally though, at least I hoped not! The event was an opportunity for Honda customers, existing and prospective, to explore the limits of their bikes in a safe environment. The event itself was well-organised, with extra emphasis on safety. There were two classes of bikes, one for the Stunner and another for the CBR150R, the same bike that Shumi rode in Malaysia, all stock save for the lights taped off and few bits removed. Only previous winners in the National Racing Championship would race in the CBR150R class, while novices, which included me, could only race in the Stunner class. Entrants in both classes would have to qualify on the first day in order to participate in the races on the remaining two days. ‘Piece of cake,’ I thought to myself, overly confident that I’ll be faster than most newbies. After all, I was the one who had hogged our long term Stunner for 1100 km.

However, what I didn’t know was that I was one of the few first-timers at the track. Most of the riders taking part in the Stunner class were people who virtually lived at the track! And that was only the beginning of my troubles. The one-piece riding suit that Honda was kind enough to loan me was one size too small. It took me more time than my daily commute to get that thing on, and once on, it felt like my whole body was in a vice. And the shiny new riding boots, I discovered, were as slippery as a banana skin on a wet floor. And in my eagerness to get ready, I’d forgotten that this was Chennai where the heat can cook you faster than a microwave. But, there I stood at the track side, with the dial set on slow roast, watching the bikes fly past on the main straight while I awaited my turn. Finally, my turn came, when all I wanted to do was to take the leathers off. Standing next to the bike in pit lane, cursing everything in general, I saw a sight that was akin to an oasis in the desert – the pit exit leading out to the track. That was enough to make me forget all the discomfort and I clambered onto the number two bike.

The feeling of leaving the pit lane behind is something almost surreal. You leave people, noise, heck, the rest of the world behind. The air is cooler, the sky is more blue and the black tarmac is more beautiful than any shampoo ad. You feel as if you could go faster and faster, never needing to slow down. Er, until you arrive at C2 carrying way too much speed and not hanging off enough, getting crossed up mid corner and becoming a source of amusement for the riders behind you. And you soon realise that, given half a chance, the track will trip you, which can be painful even on the little Stunner. The first few laps were spent messing up corner entries, feet slipping off the pegs (the boots!), scraping the pegs (not hanging off enough) and observing the much better riders go around the track. While I managed to keep up with them, it was nowhere close to the confident and smooth manner in which they went around corners.   After a few laps, I was more at home, braking on time, knee closer to the tarmac with every lap and learning that the smoother you are, the less you unsettle the bike and the faster you go. Sounds very simple, no? Well, try braking from 90 kph as late as possible, but not too much, when there are no reference points. With nothing to compare your speed with, you’re as at sea as Columbus. And while he reached the West Indies, you might end up in the run off areas, which I was told was full of snakes. Not a very comforting thought, but all the more motivation for me to not do anything stupid and stay on the track. After what seemed like too soon, I saw the chequered flag being waved, signalling the end of our qualifying session. We came around the final corner for the last time like bats out of hell, and I cast a longing look at the straight as we headed into the pits. We had been out for just over half an hour and I hadn’t had nowhere near enough of the track. Nothing had taught me so much so quickly about riding a motorcycle, and there is much more to be learnt yet. As it turned out, I did not manage to qualify for the races, but I was far from disappointed.

For starters, motorsport in India needs all the help it can get and it was mighty good to see Honda doing its bit to further this cause. Hopefully, next year’s Championship will see factory CBR150Rs battling it out with the R15s that currently rule the roost. As we saw at the track, there’s no lack of talented riders, at least in Chennai. We need more manufacturers to come forward and nurture this talent. As for me, well, I need more track time. Then we’ll see!

Us motoring journos at the event also got a brief ride of the CBR150Rs that were imported specially for the event. The little CBR is tiny, really tiny; dry weight is just 116 kg and the four-valve, liquid-cooled motor produces 17 bhp. As you can probably tell, it’ll beat the R15 silly on the straight. However, the bikes we rode had Thai spec exhausts that emitted a rorty sound which will have to be strangled if the bike is to be homologated, which means some power will be lost in the process. Owing to its compact size and light weight, the bike changes direction like a hare under attack. However, in C1,
a bumpy and flat out right hander, the CBR150R did feel a little wobbly at around 110 kph, but it should hardly matter on the road. Honda remained
tight-lipped about their plans for this bike, but we say bring it on. The R15 alone can’t take motorcycling in India to the next level, right?