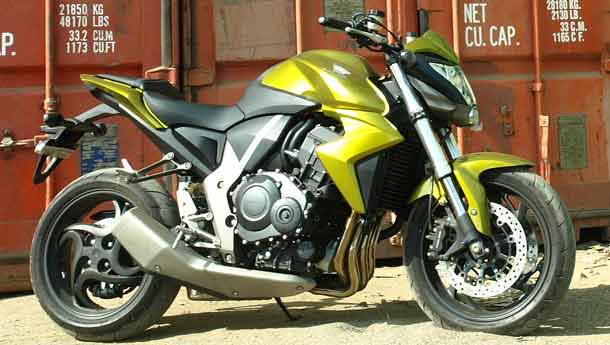 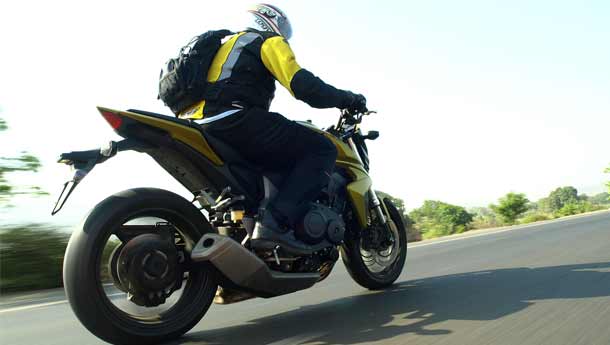 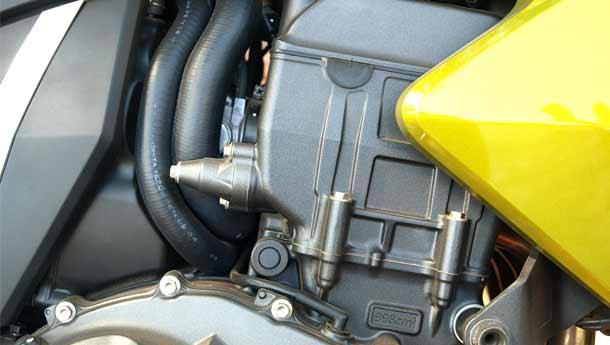 The Honda CB1000R is probably the world’s biggest commuter. If it isn’t, it certainly is India’s biggest. But make no mistake; the CB1000R is no monster of a motorcycle in length. In fact, it’s quite similar to that of an FZ16, for example. The girth is where the CB holds its weight, and horses.

Wait a minute. Did I just utter the ‘c’ word? Well, I did, in spite of the fear of being lynched. I’ll spell it out and here goes. If I remember correctly, a commuter can loosely be defined as a motorcycle that will get you going about your daily chores without any protest. Traffic snarls and a whole day having shifted through only two gears is part of a commuter’s daily menu. Maybe on a good day, the bike might see speeds of about 50 kph and on a bad day, the average top whack might be just about 30 kph. So why am I calling a 123 bhp 1.0-litre machine a commuter, for Chrissakes?

Simple. Plonk it in sixth gear and puttering around at near-walking pace is nothing for the Honda. It won’t knock nor will it buck to break free. Quite frankly, it’s hard to believe that there’s a whole litre and four cylinders between my legs. But that’s the CB1000R for you. So since the term ‘executive commuter’ has already been coined, here’s my little contribution to the vocabulary of the auto journo – deranged commuter. Or how about scuttle-shuttle?

Of course, the CB can do all of that doddering about, and more. We decided to head out of the city, towards Alibaug, a picturesque sea-side town and the traffic seemed to make way for the Honda, as if ruffled by the headlight that’s scarier than Wacko Jacko in drag. Or maybe it was the sight of the big green thing with four pipes sprouting out of its engine. And what an engine it is. The CB1000R’s motor comes from the 2007 Fireblade. That itself is saying something, really. Honda, in all its wisdom, thought that the 169 bhp Fireblade motor was too much for a naked, and instead shot down some forty-odd horses to bring the total output down to 123.4 bhp. The result, my friends, is violent torque right from the word go, all 10.2 kgm of it. Rev from idle and the front wheel will touch the sky and it stays pretty much like that through the second and third gears as well.

Going through the gears is a bloody blast on the CB1000R, with the fat 180/55 sectioned 17-inch rear tyre scrambling to grab the asphalt, as you kick to the next cog and give it the stick. Acceleration is pure undiluted dementia and you don’t know what you’re getting into till you catch a glimpse of the digital speedo. Does 187 kph on a motorcycle that’s got less wind-protection than Leona Lewis’s top sound crazy enough? Really, it would take someone with globes of steel to max out the CB1000R – globes tempered in the fires of hell itself, I say.   The instruments are the bare-boned essentials, stripped of anything that’s frivolous and not needed, apart from the thingy that tells you the time. To think of it, that detail is really quite important for reminding you how late you’re running to your office, with all the playing that you’re going to be doing on a bike such as this. Everything is digital, with a rev counter taking prominence at the centre of the console and a tiny fuel gauge and odo/tripmeter filling out the right corner. To the left, there’s a temperature gauge and a plain looking speedometer that reads like an electronic bedside alarm clock.

There’s never a dull moment astride the naked Honda. Except perhaps if you’re riding pillion. On the way back from our ride, Pablo perched himself at the rear and I knew he was there all throughout, with more oohs and ahhs slipping out than a certain Ms Jameson’s movies. The rear seat is pretty darn uncomfortable and rides lasting longer than an hour or two at a stretch are a pain in the butt, literally.

But that’s just the opposite up front. The riding position is spot on for long trips, yet sporty enough to permit some knee down action. Coming to grips with the handlebar is hardly an issue and it’s easy on your back and easier still on your wrists – another commuter trait. The seat’s wide enough to keep you supported as you shuffle around and it is firm, yet not harsh.

What you’ll appreciate the most about the CB1000R is the way it handles. The grippy tyres work perfectly with the exotic gravity die-cast aluminium frame and taut suspension to offer a cornering capability that will simply blow you away. The mass centralisation keeps the centre of gravity where it really should be, as low as possible, and the result is a motorcycle that’s willing to graze its footpeg feelers all day long. Shuffling through traffic on the CB1000R is akin to filtering water with a chain link fence – so effortless that it’s almost ridiculous. Straight line stability is brilliant and there’s no trace of any wobble or twitch even at triple digit speeds. Till you encounter a pothole, that is.

Just like any sports bred machine, the Honda’s suspension is designed for optimal performance on good and flat tarmac. The CB1000R isn’t built like the Lunar Rover and even the smallest of road undulations can rattle the Honda. Even at relatively lower speeds, traversing ditches is harsh and sounds like something just broke off. Nothing actually went kaput, but over a period of time, the battering you get on bad roads can be quite disagreeable.   So when you do see a bump coming up, swerve around it if you can, or just summon the services of the Tokico stoppers. These babies are ever willing to help you shed speed and the bite is harder than a blood-thirsty pitbull’s. In fact, they are so darn efficient, it’s quite possible to pull to a stop so suddenly, that you’re off head first into the tarmac. You have to be careful when braking, because these things sure do pack a punch.

It’s surprising that the aggressive and manic CB1000R comes from the same family as the Hornets, which were also motorcycles running older, detuned Fireblade engines, more or less. The typical traits of any of the CB series bikes are upright riding positions, simplistic styling and ho-hum performance. But here is a motorcycle that’s totally tangential to what a Honda CB is supposed to be all about; not that we were complaining or anything. The styling is straight out of a European design studio and there’s more flair and rowdiness in the look than the purely functional rationale behind conventional Japanese designs.

To sum it up, the 1000 is a perfect blend of nearly everything that constitutes a great motorcycle. It’s got the kind of looks that instantly pull in much appreciation and thousands of open jaw stares. It’s thoroughly useable and the fact that it’s a Honda will automatically make it easier to maintain than a mongrel dog. Honda’s also offering a warranty. And boy oh boy, does it go and handle.

Everything has a price these days, and sadly, the same applies to the CB1000R. Honda won’t gift one to you any time soon, but the good news is that you can buy one for yourself now. It’s going to cost you Rs 9.5 lakh, ex-showroom Delhi, but that’s the price to pay for a bike that’s got the looks, the grunt and the practicality of a toothbrush. Cheap thrills are aplenty aboard the CB1000R. Too freaking bad that they don’t come cheap.