Honda Brio vs Hyundai i10 - On the razor's H 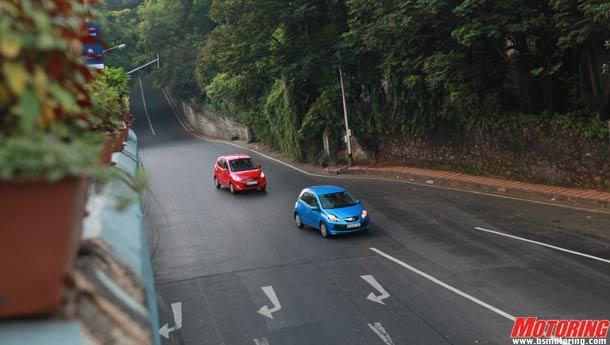 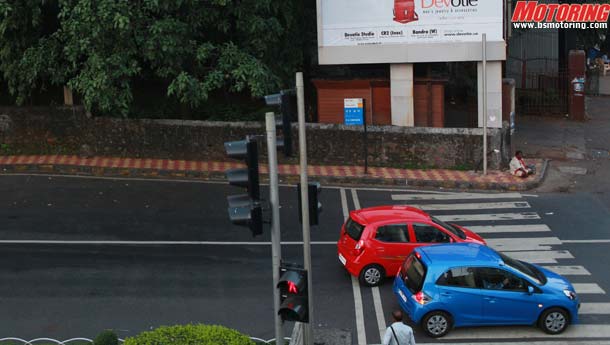 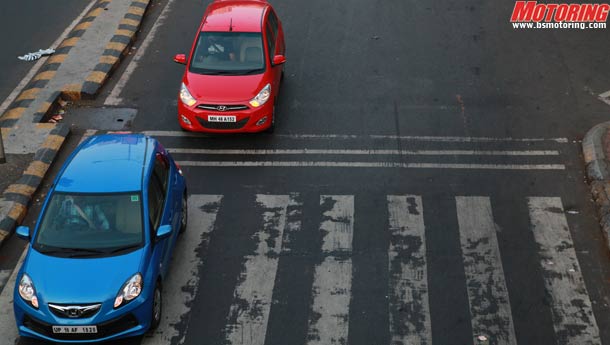 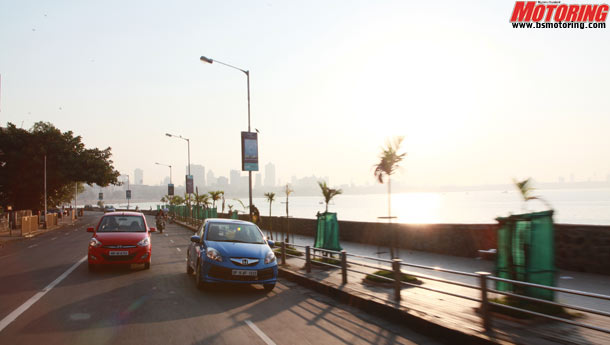 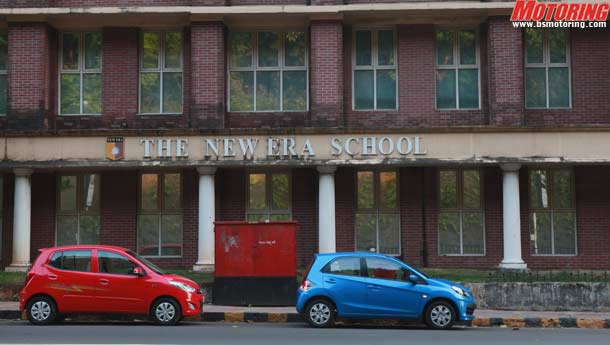 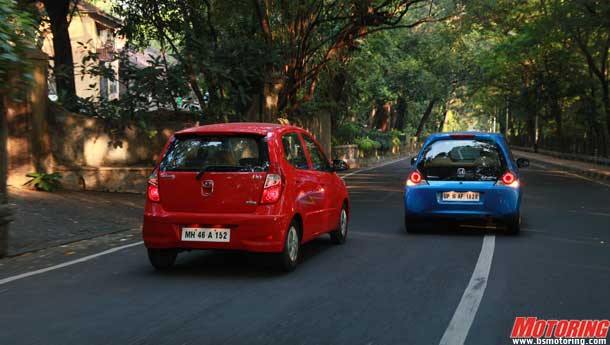 I have a small confession to make. I love Hondas. That’s a silly thing to say at the beginning of a story in which I am comparing a Honda with a Hyundai. Actually it is not a small confession but a rather large one, as I am supposed to be unbiased! To hell with it; I can’t help it – I have to be honest to the reader, after all. So why do I love Hondas? Because they are more often than not brilliant cars to drive, as simple as that. Now that my personal tastes are established, do they reflect in the outcome of this comparison? Well, you could take the shortcut and go to the verdict. But it’s never as easy as that, right? So here we go...

Right from the name itself, I like the Brio’s lines. It is a refreshing looking hatchback – though it’s not as gorgeous as the Fiat Punto – it is smart and is rather fetching in blue and red. It looks right out of a Japanese manga, with its bulbous headlamps, poky grille and slick slashes around the sides. But the Brio’s looks are not about its front or profile, but the rear-end treatment. The glass hatch is its talking point. And framed by those cheerful tail-lamps, it looks like a 1980s version of a futuristic car! In fact, the Brio already looks like an EV – just put in a battery pack, and it’s ready to go. The frameless glass hatch is held up by a single strut, which I hope will be able to do its job in the long run. While Honda says it has helped curb costs, the functional aspect of it is that – pardon me for sounding sexist – even women can reverse easily. Its stance is shorter when compared to the i10 and it looks like a downsized Jazz – nothing wrong with that. And did I tell you I like the way Hondas look?

Uh-oh. The Hyundai is up against some stiff competition here and it has nothing to do with my personal likes and dislikes. Look at the i10 when compared to the Brio. The tall-boy architecture makes it look gawky, but at the same time I will admit it is hugely convenient to get in and get out. The tall stance also translates to more comfort while stuck in hours-long traffic jams. I liked the way the pre-facelift i10 looked – it was much more cohesive as a design. Now with Hyundai’s hexagonal grille adorning all its global models, it seems force-fitted on the i10’s original smooth looks. I have been telling all those who care to listen – the i10’s front end looks like a grinning Amrish Puri... I’m not joking – have a look at its visage again. The rest of the car is regular enough and it’s been around long enough to become a part of our landscape. We Indians have happily accepted the way it looks, so let’s move on.

Well, it’s like a downsized Jazz on the inside too. The styling may look a little weird, but rest assured you will start loving its functionality and ergonomics. The steering wheel is unique to the Brio but there are lots of other little bits borrowed from the bigger hatchback, including the golf-ball gear lever. The instruments are clear in classic Honda format and the controls are all large and easy to use – Honda usually gets these things right. Is my bias showing through? The top-end version’s dual-tone plastic dash, especially the weird dark shade of brown, gets my thumbs-down but there is no issue with regard to the quality of the plastics. Toyota could learn a lesson from Honda – the Brio is perhaps the cheapest Honda car anywhere in the world, but it doesn’t feel or look cheap. You don’t feel as if you have made a compromise by buying this cheap Honda, even with the other stuff like fabric and upholstery. In terms of kit, the Brio has got enough to keep you satisfied, even in the middle trim levels – the S Option trim gets airbags and EBD too. Overall, the Brio’s insides are a feel-good zone. The rear space is a bit cramped – leg room is just about manageable while three people would be a squeeze.

Here, Hyundai gets back with the i10. Right from its launch, the i10 has always been a showpiece car for Hyundai – with it, the Korean firm showed the world that they can also make high quality compact cars. The quality of the plastics and other bits that have gone into the car are just as good as Honda. The insides are thoughtfully designed and well put together – it feels solid even when you’re doing 100 kph. What’s more, the overall ergonomics are also spot-on – right from the steering wheel to the position of the gear lever to all the controls for the AC and the stereo. The blue instrument display is cheerful enough to overwhelm the rest of the conservatively coloured plastic dash. The slightly longer wheelbase apart, because it’s taller, there is somehow some additional comfort for rear passengers and consequently leg room is better as well.

Thankfully, Honda didn’t downsize the Jazz engine into one of those humdrum three-cylinder units for shoehorning into the Brio. And it hasn’t compromised with the output either – now you know why I like Hondas. The manufacturer has kept the specs of the engine almost identical to that of the Jazz, except for a minor drop in output at 200 rpm less. The 1198cc 16-valve SOHC motor develops 88 bhp at 6000 rpm and 11.1 kgm of turning force at 4800 rpm. The motor is effervescent just as a Honda engine should be. It is peppy most of the time and when you rev it, is delightful. With its low kerb weight of 930 kg, the Brio’s performance is pretty good for its category. Not so long back, a sub-12 second timing was considered good for a sedan. Here, an eco-friendly hatchback is managing to do just that – how times have changed. The gearing of the Brio is well-suited for city driving conditions though on occasion you need to slip the clutch to get it moving – this is usually required in stop-go traffic. The light controls – the steering setup, the gearshift action and the clutch pedal – make it effortless to drive. The instrument display has an ECO light that informs you that you are being a nice citizen of Mother Earth. I usually drive as if the fuel wells are brimming over, so I don’t bother looking at it. But with the Brio, strangely I was driving at my eco-friendly best, ensuring that the light stayed on! So it is an effective tool, if it could convert a driver like me into one who’s stretching the litre of fuel. When you do that, the Brio offers you 14.6 km to the litre – which is good.

The Kappa2 engine of the i10 compares well with the Brio’s motor. The 1197cc inline-four 16-valve DOHC motor, with variable valve timing, develops 78.8 bhp at 6000 rpm and 11.4 kgm of torque at 4000 revs. It may be a little low in bhp, but the motor doesn’t let that fact bother you. It may not be as silky as the Brio engine, but it is pretty refined. When put to the test, the i10 also surprises you with its brilliant performance. Usually, in the quest for fuel efficiency, manufacturers take away whatever little performance edge these dinky cars have, but take a look at the figures – they are not bad at all. The i10’s motor is much more urban-drive friendly than the Brio and easily manages to hold its own against the worst of traffic you can throw at it. As an urban commuter, the i10’s powertrain is a tad better than the Brio’s. That’s not all. Gearing apart, the additional torque helps the cause too. The i10’s controls are also light and the gearbox is one of the slickest shifting ones around. Plus given its narrow dimensions, it is much more of a scoot-and-shoot car compared to the Brio. The i10’s kerb weight, at 860 kg, is significantly lower than the Brio and that shows in its fuel economy figures. Still, the i10’s drivetrain is no less fun compared to the Brio. It’s a draw again, what’s happening? Sacrilege!

Maybe here things will get sorted out. The Brio’s wide stance and lower height means it’s a car that makes you feel one with it. For me, that’s a very positive attribute. I like hatchbacks to be lithe and nimble – they should be intuitive. The Brio is like that. It has a chuckable nature and the light steering wheel setup helps its cause, though I would like a bit more feedback at low speeds. No issue. Give it a set of curves and the Brio stays true to its path. It loves to be revved and given its limitations, still loves to go flat-out – a 100 bhp version of this car would be really fantastic. What mars its dynamics package is its ride – which unfortunately is a typical Honda trait. Its damping isn’t good enough to smoothen out rough sections of the road and these unsettle it a bit. The Brio frankly prefers well-surfaced roads.

The i10’s taller stance goes against it being one with you. But not everyone wants the same thing out of their car, right? So if you are willing to overlook that small aspect, it is a capable car in its own right. Okay, it does not lend itself to corner carving, but when you do head out to your favourite section of the highway and push it, the i10 is not all that bad. The steering feedback is not as good as the Brio’s but it’s not jelly-like either – I can’t believe Hyundai couldn’t pull it off with the new Verna, which has a pathetic steering setup. The i10 is slightly understeery vis-à-vis the Brio but that’s just nitpicking. The ride of the i10 however is much better than the Brio’s – it keeps passengers cocooned across most surfaces. So what to do now?

It is a close battle, which we knew even before we began. So might as well keep it short. The winner of this battle, I have to admit, is the Hyundai i10. It is not a huge chasm between the two, like with the Eon and the Alto – it is very, very narrow. Both cars have brilliant drivetrains, both have ride and handling attributes that cancel each other out and both serve their purpose very well. Though the Brio is the newer, trendier car over here, the i10 wins it because it feels solidly built, offers slightly better value, is more practical and is a better car to live with. And for a Hyundai, surprisingly, it is fun to drive as well. As for me, well, you know where my heart lies...