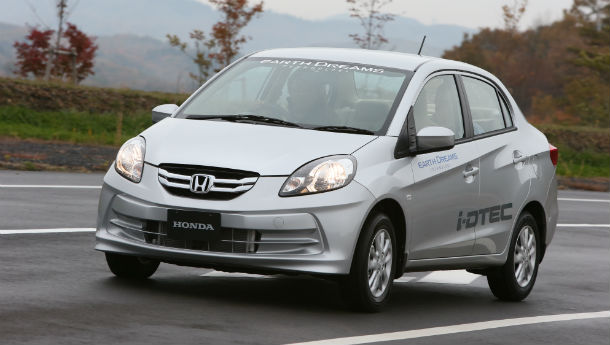 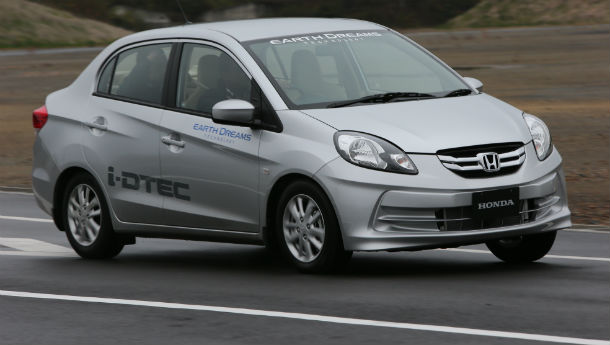 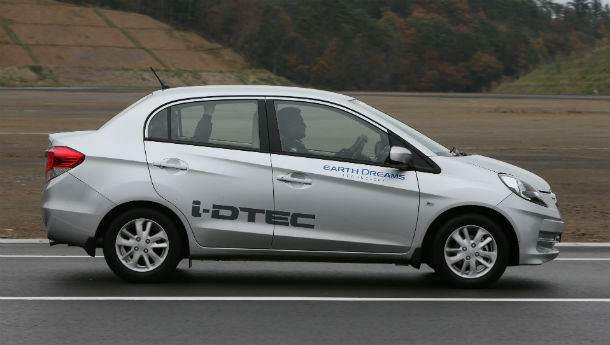 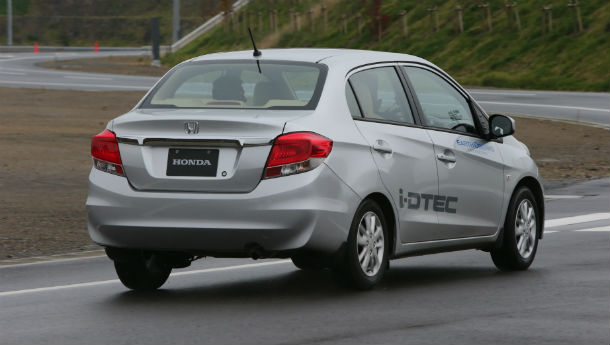 The last time I wrote about the Brio was when the car was launched in 2011, and at that point I had said that Honda seemed to have reached the very bottom of its slump in India – the only way, now, was up. The Brio was the small car that was missing in its portfolio in India, the Jazz’s price had reached a sensible level and, most crucial of all, Honda’s diesel plans for India were well under way. Not having a diesel engine in the lineup was hitting the company very hard indeed, and it had recognised this drawback and begun to do something about it. That something has resulted in this car, the Brio diesel – and it’s a sedan to, well, boot! Honda is not one to do things in half measures, and with this car – the Brio Amaze –  it has clearly decided to take the Suzuki Swift Dzire by the horns.

Let’s switch things around and begin at the back of the car, for once. The Brio hatchback is nothing if not quirky in its rear design, with its flat hatch door and slightly bug-eyed tail-lamps, and the Amaze carries on the tradition of quirk, if not in that pronounced a fashion. The most obvious addition is, of course, the presence of a proper boot, with a crease at the bottom that adds some character. The boot is capacious, and has more space on offer than the Swift Dzire. The tail-lamps jut out of the sides of the boot, and manage to pull off the trick of looking somewhat ungainly yet funky at the same time – this appears to be a peculiarly Japanese trait in terms of design! Crucially, the boot doesn’t look like it’s been pasted on as an afterthought – the integration of the design is much more cohesive than the Dzire, for instance. The bumpers are neatly integrated into the body shell, front and rear.

Move around to the profile of the car and you’ll see how compact it is; with its 3990 mm length (5 mm less than the Dzire), it meets the excise cut requirements. And although its exact weight hasn’t been revealed as I write this (we estimate a figure of under 1100 kg), the car is in keeping with the philosophy of ‘man maximum, machine minimum’ – it looks lightweight, certainly. The rising waistline of the hatchback is also in evidence here, with the upswept lines on the flanks giving it a bit of dynamism, and the creases continuing on to the tail-lamps. With a height of 1500 mm, it’s just as tall as the hatchback and it has a wheelbase of 2405 mm and a width of 1680 mm; shorter by 55 mm, narrower by 15 mm and with a wheelbase that’s 20 mm shorter than the Swift Dzire. The wheelbase, however, is longer than the Brio hatch by 60 mm to improve interior space.

Look at the car head on and it’s difficult to tell the hatch and sedan apart. The Jazz’s design elements are seen, as usual, and the small front grille with the large Honda logo and the large airdam for the front bumper are present here too. There are a few design cues from the City as well, especially with these alloy wheels, the wheel arches and the upswept rear three quarter view. All in, this is an attractive car, and certainly the best looking one among the cars available in the compact sedan segment at the moment.

Even though I drove a prototype, there’s little to distinguish the interior design of the Amaze from the hatchback. The AC vents, centre console, fabric seats, glovebox and steering wheel all look and feel the same. The overall build quality and fit and finish are up there with the hatchback, which is to say that it’s all very acceptable without quite being absolutely top notch. Honda engineers explained that the concept for the Brio sedan was that of a ‘Compact Micro Limousine’ – and I can tell you that the limousine part is certainly accurate. The utilisation of space, especially at the rear, is outstanding – even with a near-6 foot driver and the driver’s seat pushed all the way back, there’s more than enough leg room directly behind the driver. Both head and elbow room are also excellent, and buyers should have no complaints regarding interior space, although, as with the hatchback, under-thigh support could be better.

Now to the meat of the matter – the new 1.5-litre i-DTEC diesel engine. Honda hasn’t divulged the exact technical specifications as yet, apart from claiming that it is the lightest 1.5-litre diesel engine in the world (a fairly specific claim, eh?). It’s an all-aluminium, open deck block, with a narrow, high-strength camshaft, compact and lightweight pistons and, apparently, a rate of friction comparable to Honda’s petrol engines. The powerplant sits snugly in the engine bay, filling it up neatly, and the turbocharger is exposed. Honda carried out extensive surveys in India, in all the major metro cities, in order to study driving styles, fuel quality and so forth and used the inputs they received to build the engine. Standing outside the car, the diesel drone is muted, although you can hear the clatter more inside the cabin – some more sound deadening would be nice. Mated to a sure-shifting, short throw, 5-speed manual gearbox, the powerplant has a flat, linear torque curve with a nice and smooth delivery of both power and torque. There are no real spikes or troughs in either, and the car should be a doddle to drive in both crowded city conditions and out on the highway. I couldn’t push the car much beyond 70 kph on Honda’s Twin Ring Motegi test track (mainly for fear of being instantly deported), but I imagine the car hitting a top speed in the region of 170 kph. Impressive fuel efficiency should more or less be a given with this engine as well, going by how frugal Honda’s petrol powerplants tend to be.

Riding on MRF ZVTV 175/65 R14 (front) and 175/55 R14 (rear) tyres, the Amaze rides well, although a smooth test track is not the best place to judge real world ride quality. There is a certain amount of body roll, but the car remains composed even on hard cornering and the rear seat occupants shouldn’t feel unsettled in most conditions. The feedback from the steering wheel is adequate, without quite being lively, and the wheel feels nicely weighted. Stability in a straight line as well as during lane change manoeuvres is reassuring, and the car should be easy to drive in all conditions.

It’s clear, even after a 10-minute drive, that Honda has a very promising product on its hands. We expect pricing to stay in line with Honda’s premium image, but if it’s priced aggressively, say in the region of Rs 5 to 7 lakh, this car has all that it takes to give the Dzire a scare and even possibly become a market leader. A petrol will also be introduced with the same 1.2-litre motor from the hatch, but finally, finally, Honda has delivered a product that looks all set to get it back on the path to competitiveness in the Indian scenario.