Honda and Yamaha go head to head in India 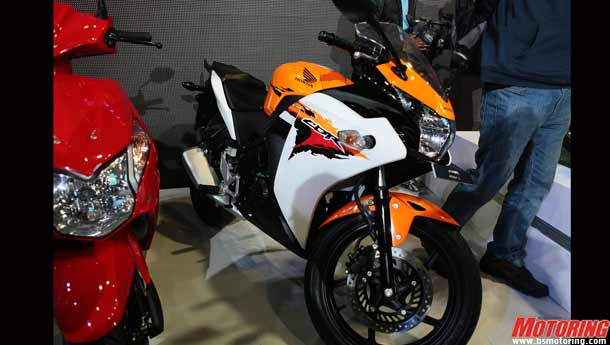 This premium motorbike, which was one of the seven new products that the Japanese company unveiled, was a top draw at the Expo. That’s not something its long time rival and fellow Japanese company Yamaha would enjoy.

This new segment, more commonly referred to as the budget-performance sports bike segment with engine capacity at 150cc, offers the riding experience and styling of bigger capacity bikes but at a fraction of the cost.

Sources in the know say Honda will price the new bike around the same level as the new R15 version 2.0, which Yamaha had launched four months ago. Honda, which has a 14 per cent share of the Indian two-wheeler market, expects to start retailing the CBR150R within the next two months.

The new R15, though expensive by Rs 9,500 compared to its earlier version, brought in additional demand for Yamaha selling on features like improved acceleration and top speed with new stylish 5-spoke split alloy wheels.

The CBR150R is a clone of the CBR series of bikes that Honda makes and sells in India and globally. The CBR series, manufactured and imported as fully built units in India, are known for their stylish appearance and sporty performance.

Honda’s new bike will plug the huge pricing gap between the Unicorn Dazzler, a 150cc commuter bike (priced at Rs 65,000) and the CBR 250 (priced at 145,000). This bike, targeted at young buyers, will address demand from the city regions, says the company.

Yamaha knows its solo run in India in this segment is about to end. A senior executive at Yamaha Motor says, “We have to watch out for the CBR150R as Honda has directly pitted it against our flagship model R15.”

The CBR150R is built to give Yamaha’s R15 a tough competition as the specifications of the model suggest. Honda’s bike has better ground clearance, bigger dimensions, slightly better power and a bigger fuel tank than the Yamaha bike. Both, however, come with six-speed transmission.

The battle between the two will also be played out in the higher capacity bike segment, with Yamaha beginning work on a higher capacity bike to be pitted against the Honda CBR250R and the Kawasaki Ninja 250. This 200-250cc bike will be the next generation Fazer, say market sources.

Like Honda which has almost fully localised the CBR250R in India, Yamaha too will look to exploit this possibility to keep manufacturing costs to the minimum. The CBR250R currently sees sales of 2,000-3,000 units per month despite costing more than Rs 1.5 lakh (on-road).

Yamaha’s stronghold has been the 150cc bike segment where it has four models with seven variants. Yamaha sells the R15, FZ, Fazer and SZ series in this segment. The company claims to have increased its market share in this segment to 17 per cent from 14-15 per cent recorded during the middle of the year.

Hitting back with scooters
But the biggest ace up Yamaha’s sleeve would be its proposed entry into the scooters segment, a stronghold of Honda for years. The company plans a series of launches in the segment in the coming months.

The Activa, which is one of the three scooters from Honda, is presently the largest selling automatic scooter in the country with a share of nearly 35 per cent. Honda is gearing up to launch the face-lifted Dio (an automatic scooter) next month. Though Yamaha hasn’t introduced a single scooter on the road yet, it is confident of selling 300,000 scooters a year by 2014.

“We were waiting for market research feedback on scooters. The products will be tweaked specifically for the local market” – is all the Yamaha executive would say.

Despite slackening demand for new vehicles, scooters sales have grown by 22.5 per cent in the nine months ended December, 2011 with sales of 1.84 million as against 1.54 million sold in the same period last year. In the last financial year, scooter sales crossed the two million mark, growing by 42 per cent.

According to Hiroyuki Suzuki, chief executive and managing director, India Yamaha Motor, scooters will account for 30 per cent of Yamaha’s total sales by 2014. The company has announced investment plans of Rs 800 crore over the next two years and a sales target of one million units in 2013-14.

It is planning to set up a greenfield plant for which land is being acquired in one of the southern states. Increased production will enable Yamaha to increase market share to a targeted 10 per cent by 2014 from 2.72 per cent now.

India is the smallest market for Yamaha in terms of volumes and turnover despite India being the second biggest bike market in the world after China. However, the company, which sells mopeds and scooters in other high volume Asian markets like Indonesia and Thailand, wants to offer ‘very affordably priced models’ in India.

Like Honda, Yamaha too is making fast in-roads into the rural areas setting up 400 miniature sales points that will act as extension counters for its dealers. These compact dealerships are expected to help improve the company’s presence in the Tier III cities and alike.

Presently more than 15 per cent of Yamaha’s sales come from Tier III cities. About 60-70 per cent of all bike sales in India come from the non-metro market.