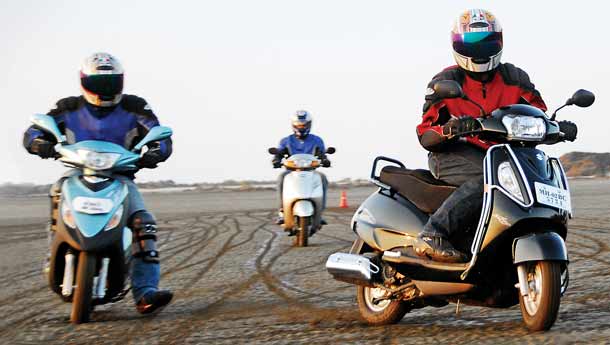 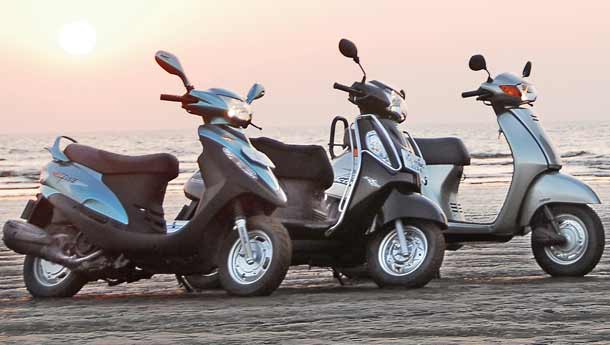 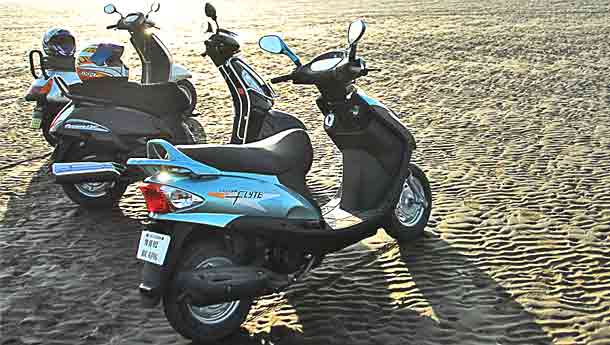 We’d already pitched the Kinetic Flyte against the Suzuki Access in the December issue but what was left to be seen was would either of these new-comers dethrone the king of the scooter world, the Honda Activa. So instead of doing just another straight-forward test with the entire jumble of numbers and parameters, we decided to simplify things and have fun while at it. Welcome to BSM’s first scooter PET or performance evaluation test. It involves three scooters, sandwiches, a ferry, (okay read that as three scooters on a ferry) plenty of sand, some surf and one number at the end of the test that tells you which scooter is the winner.

So with mud flying in each other’s faces and Pablo scampering for cover we ride/run along with the scooters through the sand to get to the edge of the water. Cleverly I’ve got control of the Flyte, the lightest of the trio, with Shumi and Saraid struggling through the deep sand to the ferry with the Activa and the Access.

Scooters loaded, we sat back to catch our breaths before it was time to get off on the other side. It’s the shortest ferry ride you could even experience. I suggest the inclined ramp alternative (Josh means jumping the darn things clear across a forty-foot creek. Must be something he ate... Either that, or he’s hungry. – Shumi) to it but Shumi shot it down... glug glug! Now we chose the beach to do this because we love the beach and we’d be able to take the scooters to the limits of their traction and beyond. And come back laughing. We’d have some soft sand to fall back on and we could drown the loser (rider – the scooters don’t belong to us, see?) as well. We’re just kidding about the last part.   Shumi and I drew up a course with a piece of driftwood in the sand that would help us evaluate the three scooters. The first part which comprised of a slalom section, a U-turn and back through the slalom would test the scooter’s handling capabilities, suspension, flickability and also give us a fair idea on how the weight distribution would aid the handling or otherwise. The sand itself wasn’t totally loose, and had little ripples in them which would work the springs quite a bit.

The second section was going to put the powertrain and brakes to task with a hard acceleration run  and a zero point. We’d then have to back the scooter up and park parallel to the cone, switch it off, take the key out, put it back in and make a dash to the finish. While the hard run to the zero was simple enough, the parking would complicate matters. To back it in quickest, the brakes would have to have the feel and feedback to allow replicable, accurate stops. A lighter, weildy scooter would be easy to back in as well. The key thing was a figment of Shumi’s rather fervid imagination – he thinks it would add value and a fiddly lock mechanism would cause trouble. In hindsight, maybe we should have required the rider to go through the motions of filling up, that would definitely have added value. Next time... Anyway, this section would test convenience, braking and acceleration.

And here’s the thing. We wanted the PET to be realistic and representative (On the beach? - Bijoy) so the slalom course was designed for lower speeds – between 30 and 50 kph – while the zero at the parking lot was set for about 65 kph only. The only time the engine would get to use top-end prowess was on the final run where the scooter was allowed to make a running finish at whatever speed it got up to, usually around the 75 kph mark.

The Activa was the first up through this course. We had to get a feel of the benchmark no? Parked in front of both the Access and the Flyte, the Activa looks like it’s the Access’ long-lost cousin. It’s more or less the same size to look at but feels much smaller once you get on. The Activa feels really quick off the line, but a glance down at the speedo brings you back to reality. Through the cones the Activa’s feels stable but takes a beating while changing direction. The steering isn’t as accurate as you’d like it to be, probably because of the linkage type suspension that the winged scooter employs.

The slalom is essentially a series of quick corners and the Activa’s 99.2cc powertrain is left wanting when you’ve got to accelerate in a burst between cones. But do remember that the competition sports bigger engines. At the U-turn, the scooter holds it course and zips through the acceleration run, hard on the brakes – the Activa’s could be more responsive, but the job gets done. Backing it up parallel to the cone is also a breeze but the wide seat does get in the way. I’m not complaining though because on a long ride it really is very comfortable. The key was in and out in a jiffy with the starter whirring to life so that I could make a dash to the finish. And all of this happened in just over the time you took to sip your coffee and read the above paragraph – a total of 54.80 seconds.    Next up was the Flyte. Now this scooter was my pre-test favourite. I’ve been riding one around the place and am in love with how supple it is. It’s pretty bright and funky looking as well. And although it loses out a bit in terms of ride quality over the Access, it makes up for it in agility. Through the slalom, the Flyte’s 105 kgs is a feather and it can change it’s course quicker than the time you’d think of the direction. Kinetic’s telescopic fork front-end does wonders, in contrast to the older link-type jobs. The Flyte completely suppressed the sand ripples, allowing the rider to get on with using the accurate and agile direction changes to best effect. At the U turn, the Flyte allows you to swing the rear around like you would on a motocrosser and zip back through. The extra feedback from the front-end helps the confidence and some wild rear-wheel steering was noted on the Flyte. The acceleration run felt a notch quicker than the Activa, and our split times showed that the Activa had lost time to the Flyte already. The braking-reversing bit is effortless and the anti-theft ignition acts as a guide to the key and shaved off three blinks off the timing. The spirited dash clocked 51.18 seconds to the flag,more than three seconds ahead of the Activa.

Now things were hotting up as Shumi and Saraid joined in the action. We did a few fast runs as they chased my times through the course, each trying to clock better times. It got a bit heated as Shumi put on some stiff competition on the Flyte, with Saraid not far behind on the Activa.The Access unlike both the Activa and the Flyte is a more straight forward scooter when it comes to the riding position. Incredibly (and unexpectedly) the Access, through the slalom, came out on top as an all-round package. The 125cc engine has 0.5 bhp over the Flyte and that helps as you power away from each of the cones. The additional 5 kg on the Access, goes more or less unnoticed, especially when one is swivelling the scooter around the U-turn. Steering inputs are effortless and spot-on and the Access is suddenly feeling as good if not better than the Flyte. Through the second U and I’m off to the parking bay and in my head, I’m sure that the Access has an advantage. Slide, align it perpendicular and back it up. Now here’s where I want the Access to have a different couch. The seat is Activa-ish, and it gets in my way a little bit. Still in the lead though, I unplug the key, slide it back in and thumb. Whirr... Whirr... Whirr... and 3 secs of valuable time lost as I flooded Suzie’s carbs. Yes I’m about as upset as you about it as the Suzuki had risen to the occasion but faltered because of an itchy wrist.     Now while we do say that our PET gives you an overall winner and we do have one, the Flyte. It is clearly our winner by two seconds.The Access a close second (my fault, more than the scooter’s) with the Activa a distant third. But if we do factor in the loss due to human error, the Access and the Flyte are neck and neck for the top spot. Both are evenly matched in terms of performance, and handling while the ride on the Suzuki is up a notch, especially for the pillion. And Pablo will vouch for that.All three machines are built to a fault and but the Honda’s age is evident. The powertrain, even with it’s fantastic refinement levels, is in need of an upgrade, same goes with the styling. Clearly, another sticker job won’t cut it for Honda with the two new 125cc machines leading the way.

The Activa and the Access have Rs 1,500 between them with the Access priced at Rs 42,730(ex-showroom Mumbai). But keep in mind that if you do opt for the Activa, you going to have shell out a bit extra for the side stand and other small parts like a front storage space which then makes the Access a steal. Especially since it’s powered by a 125cc motor. The Flyte on the other hand beats these two with a price of Rs 37,400 (ex-showroom Mumbai) which is another good reason to seriously consider it over the Suzuki and the Honda.

Oh and by the way, no scooters, or riders, were drowned after this shoot.