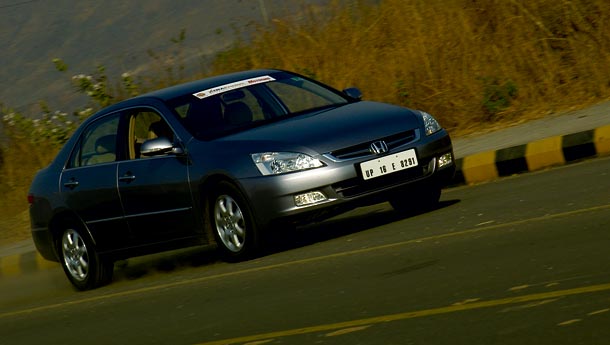 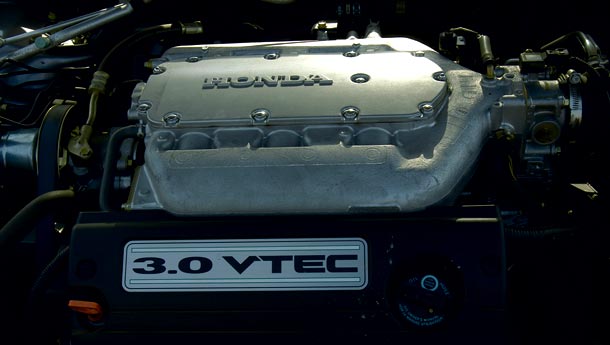 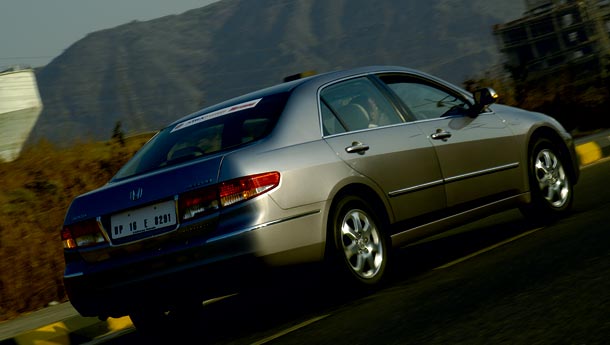 The last time I drove a new Accord – with a 2345cc, i-VTEC inline-four – I don’t remember feeling the need for more power. Not really. For most of our road and traffic conditions, 142 horsepower is handy enough, right? For me, yes. For you, probably. For Honda, well, perhaps not. Which is why we now have an Accord with a brand-new 6-cylinder engine. It’s not the first time a manufacturer is offering a V6 in India in a D-segment car.

Hyundai did it first, with the Sonata V6. Launched last year, the 2654cc, 166 bhp Sonata V6 was as powerful as a Mercedes Benz E240, luxuriously appointed, comfortable, safe and very fast. However, it was deemed expensive, thirsty, a bit too flashy and lacking in good taste. As a result, the Korean car hasn’t done too well for itself. But the Sonata V6’s failure (more or less) hasn’t stopped Honda from introducing a V6-engined Accord. Word on the street is, Toyota are due to launch a V6 Camry sometime soon and this, ostensibly, is Honda’s pre-emptive strike against the other Japanese giant. While warring factions get set to slug it out in showrooms across the country, we, car scribes, are rubbing our hands in glee in anticipation of forthcoming power wars.

Bag of tricks
So what do we have here then? Satisfying high-cholesterol, full-fat, full-flavour, Variable valve Timing and lift Electronic Control, that’s what.Remember VTEC, that most evocative of all automotive acronyms? It’s back. With the current City, Honda sold their soul to i-DSI. Now, while intelligent Dual and Sequential Ignition does wonders for enhancing fuel economy, it takes away the joy of driving. Now while others here at Motoring are wont to poke the occasional jibe at my undying love for the late, great, City VTEC, I think even they are happy that a VTEC powerplant is once again in our midst. And this time, it’s bigger and meaner than ever. In the size department,amongst all cars produced in India, the Accord V6 is second only to the Mercedes-Benz S350 L. And almost as powerful. What you get is a 2997cc, SOHC, VTEC V6 which makes 221 horsepower at 6300 rpm and 28.1 kgm at 5000. Go ahead, say you’re impressed. We are.As is right, Honda are offering this car in India with an automatic gearbox. A manual box is not even on the options list and for a change, I’m not complaining. Big engines and big horsepower numbers in a mid-size family sedan are very well suited to automatics and the Accord’s 5-speed unit is as effortlessly slick as you would expect it to be. Honda have also bucked the current trend of combining an automatic with some kind of manual override and that’s also okay with me.   I do love automatics that let you shift manually, without using a clutch (the Lancer Invex, for example) but the Accord’s auto-box has five ratios, which are sufficient, really, to thoroughly explore the V6’s vast reaches of power. Some other D-segmenters like the Sonata V6 and Mercedes-Benz C-Class also have clutchless manual shifting on their auto boxes, which I hardly ever use. Like I said, on bigger-engined cars that have plentiful horsepower, automatics are quite alright.

Driving the Accord V6 is an exercise in sheer self-indulgence. Though it has become something of a Mercedes-specific cliché of late, the term ‘it wafts you along’ is apt for the Accord V6. The car is happy pottering along in town at Daewoo Matiz speeds and yet, when you floor the throttle,
the acceleration is almost metaphysical. With each dab of the throttle, it’s as if the car picks up its occupants and gently deposits them a few hundred metres further down the road. It’s like travelling in a fast-moving, leather-lined cumulonimbus cloud. A cloud that goes from 0 to 60 kph in 4.08 seconds and has a top speed that’s in the region of 220 kph. That, unless you own a BMW M5, should be fast enough indeed. The Camry 2.4 VVT-i (fitted with a manual gearbox), which did the 0-60 kph run in 3.86 seconds when we tested it last year, remains the quickest off the line, but by the 100 kph mark, the Accord V6 hauls it in good and proper. The Camry goes from 0-100 in 8.55 seconds while the Accord V6 takes only 7.99. To put that in perspective, here are the 0-100 kph times of some other cars: 10.50 seconds for the Opel Vectra, 10.34 for the Accord 2.4 i-VTEC, 9.10 for the Octavia 1.8 Turbo and 9.49 for the Sonata V6. For now, the Accord V6 is the king of quick. And yet, this car never, even for an instant, ceases to be a supremely civilised family sedan. Floor the throttle from standstill and there’s still only a barely audible thrum from the V6 as the car surges ahead.Noise suppression is almost as impressive as the power delivery itself. And, unlike the Camry when it’s being launched hard, there’s almost zero scuttle shake with the Accord V6 when it’s given the stick.

Talents aplenty
Straight-line acceleration, speed and sheer refinement aren’t the Accord V6’s only talents. There’s also handling. And the best way to describe it is, it’s safe. The Honda name has come to symbolise brilliant engineering and for good reason. The company thinks things through before implementing them and that reflects in the product. Take the Accord V6 now. It’s a family sedan that might also be chauffeur-driven (at least in India) every once in a while. It’s certainly no S2000. So what should be the defining handling trait for such a car? Understeer, of course. And that’s what the car does, in fast, sharp corners.   Straight-line stability is beyond reproach, but hurl the big V6 around a fast bend and the front wheels wash out wide. The on-board traction control tries its best to quell understeer, but is completely overwhelmed by the 6-cylinder engine’s mass. Take your foot off the throttle and the car will tighten its line a bit, but if you insist on keeping the accelerator pinned in corners, you will run wide. This is, for most people, the safest thing to happen. Much safer than rear wheel drive oversteer, which may well land you in a ditch, or worse. And since the Accord has massively effective anti-lock brakes which are adequately powerful, if lacking some sharpness and some feel, you can get away with braking in the middle of a corner.

The big Accord’s steering is also in keeping with the rest of the car – refined, and geared to insulate the driver from the road as best it can. I’m not saying it’s bad. It’s just that enthusiastic drivers might want more feedback, more involvement. Some staffers didn’t like wood being used on the steering wheel, though I didn’t find that a problem. Interiors are quite likeable – beige leather upholstery, in-dash 6-CD changer, a very modern-looking facia, dual-zone air-conditioning, power-adjustments on the driver’s seat and oodles of room to stretch out in peace. Outside, the V6 rides on 16-inch alloys (the 2.4 Accord gets 15-inchers) which wear tubeless 205/60 Bridgestone Turanzas. Tyre performance is adequate but grip, though adequate, is definitely not exceptional. I’d still prefer the 205/65 Dunlop SP Sport 300s which Camrys are shod with.

On the six?
Wasteful excess? Sheer self-gratification? Or does the Accord V6 actually make sense? Hmm... at close to Rs 17 lakh (ex-showroom, Delhi), the V6 costs about Rs 1.5 lakh more than the Accord 2.4, but you do get lots of bang for the extra money. If performance means nothing to you and if you don’t ever intend to exceed 150 kph, the standard Accord 2.4 is definitely your car. Same goes if you’re chauffeur-driven most of the time. If, however, you are a performance enthusiast and have some spare cash lying around, you can’t give the Honda V6 a miss. The zero-effort manner in which this car wafts you around has to be experienced to be believed – this car will happily trundle across continents. And then of course, there’s the added prestige that goes with the 3.0 V6 VTEC badge. Perhaps Honda should also look at introducing some colours that are V6-specific. Either way,they have another winner on their hands.