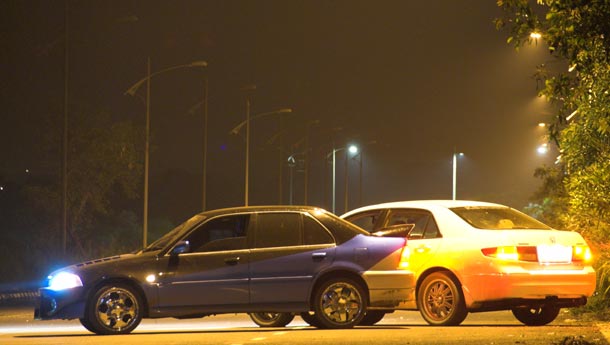 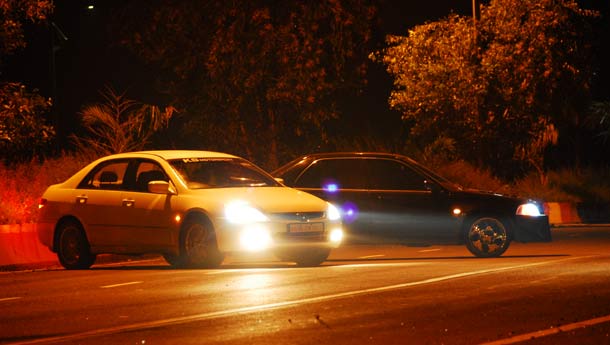 I’m in a Honda Accord and it’s engaged in first. Oops, I’m sorry (that was drool on the steering) I’m not used to the excitement. I’m really intrigued by the FUN button on the in-car control unit. But unlike BMW’s M button, it takes more than just your thumb to let out a few extra horses that are asleep under the hood; you probably need a crash course of sorts to operate this button. The engine’s silently humming at idle waiting for the go ahead. All clear. The revs hang at five-and-a-half as I let out the clutch quickly – very quickly.

The SCRUUUNCH is audible inside the well insulated cabin as the  235/45-17 rubber soles struggle for grip on the dirty side of the strip. The on-board computer’s already sensed 5 PSi of pressure at the exhaust and has got the Garrett T28 spinning like it’s on steroids to pack an additional 7 PSi of atmospheric molecules into the combustion chamber. Two secondary injectors help the bang to get bigger. Second gear comes up quick, but it hardly matters as the short throw gear box allows the shift to take a fraction of a second. I cross the 60 kph mark before I have time to blink and 100 comes up in under 7 seconds.

A shift to third at the redline sees little Garrett snorting so hard from the blow-off valve, it would make the champion swine sound like a wimp. The needle went over the speed limit light years ago and I’m now nearing the end of the strip. Stainless steel braided brake hoses give this Accord the best braking I’ve ever experienced. It was just like putting my foot on to those rotors to bring it to a halt. I’m impressed and convinced – loud cars, just like loud people are er... loud. It’s the quieter ones that actually do the real talking.

I said that because I’m really bored of loud cars. Yes, you know those guys who drive those supposedly tricked out Honda Citys and Mitsubishi Lancers, with the latest Bollywood Badshah blaring on the stereo and sporting those tin box exhaust cans and multiple branded stickering schemes, thinking they’ve got the fastest machines in town because they’re a poor imitation of the guys from that pathetic sequel to The Fast and The Furious. Ironically,I’ve got to do a feature on performance cars and, harder still, track down a real performance machine to feature.

A little research and I make the call. It’s to Karan Shah, the owner of KS Motorsports – a hard-core, no-nonsense tuning house in the heart of the Mumbai business district. Karan asked me to come over and choose what I wanted. I was expecting the usual bunch of stickers and stereo systems, but as I rolled into the petrol pump a bunch of expletives fell out of the gaping hole in my face. It was a Mitsubishi – okay, there were three Mitsubishis, (and I’m not telling you what they were) one Honda city, one Skoda Octavia and a few others parked under covers.   My initial choices were the Mitsubishis, but on second thought we decided to ease you into Karan’s collection of tuned monsters. A trick Honda City owned by Umair Zamzam and a poser of a Honda Accord owned by BSM’s friend Murad Jetha and tuned by Karan. I did call it a poser and it is one. Shame on you for thinking that it’s bone stock, it’s as fast asleep as any sleeper can be.

Karan, who’s been tuning cars for the last five years, got himself a degree in automobile engineering from Arizona, after which he worked with Jaguar for a year. He then moved back to India and started KS Motorsports. He started off with fitting K&Ns and MSD ignitions to finally mastering tricking out some cool rides with nitrous kits and turbos. Oh, and he swears by Garrett turbos and refuses to claim any output figures, not yet at least because his dyno is not up and running.

‘Nuff said. I got behind the wheel of these cars at KS Motorsports’ very own drag strip – a controlled environment where cars can be launched from a standing start to infinity and beyond, without having to worry about cows crossing the road and pedestrians sprawled out on the sidewalk. It’s now time to switch to Umair’s City. The Car’s got a shiny two-tone paint job and no, he doesn’t polish it with his handkerchief and spit, it’s got grains of sparkle embedded into the paint. The radical wheel spinners look rather cool, but as Karan points out, the 5-spoke alloys behind them are way cooler. Inside the car, blue lights illuminate the dash as you settle into plush leather seats. A three spoke Momo gives the car a sporty feel, but that’s just the tip of the iceberg. I’ll explain more as we drive. I fasten the seatbelt and adjust the rear... What the?! It’s a small flat screen television that I adjust. The screen is hooked up to a camera that acts as your rear view mirror and also does duty for the Sony Playstation2 that’s in the dash. A twist of the key and the Mallory ignition system streams pulses to the MSD ignition coils, which in turn send fat chunks of voltage to the spark plugs. Hold any of the plug caps while you fire up the engine and it will save you the trouble of paying the attendant at the electric crematorium. The engine sings a continuous hum through the Hypermax exhaust system. The gearbox on this car has been grafted from a Civic, at least the first, second and the final cog. As a result of this, first is very tall and takes you all the way to about 64 kph. A short stubby shifter with a short throw once again saves you the shift time and while the car has all the nitrous plumbing in place, the tank had been sent for a refill. And that means I didn’t get to experience my first milli-seconds of nitrous but then, neither do you.

This car is a potentially fast machine, but it’s a car I’d rather arrive at the drag strip in than take racing. It’s the Accord that I’d like to get my 15 second kicks from, one milli-second at a time. And the next time you see somebody smile mischievously at you from a white Honda Accord at the traffic light, remember there could be a little Garrett sleeping under that hood.

If you want to trick your ride, you can get in touch with Karan Shah by visiting his site www.ksmotorsport.co.in