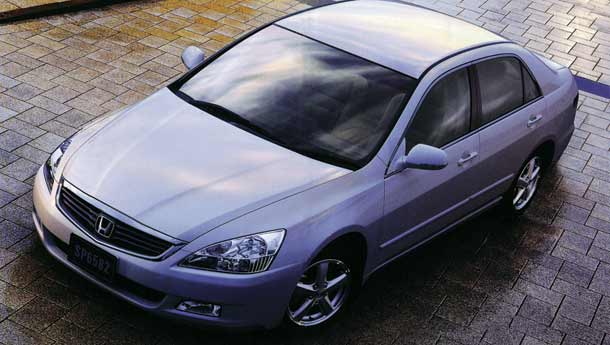 It was one of those days when God decided that the poor Indian motoring scribe had not been getting enough to drive. The test drive matrix at the Honda Tochigi research and development centre was simple – a couple of presentations, a live crash test and only 21 different Honda cars to drive for the day. Sure, by sunset I was trying my best not to confuse the ride and handling characteristics of the Life Turbo with those of an Integra Type R and to remember whether the brilliant Mobilio Spike I drove was the oddball square one in red, or the blue one with egg-crate grille.
But I did take down serious notes on a few cars. Cars such as the Fit Aria, which debuted recently in India as the all-new City, and of course, the Inspire – which, come January, will be launched here as the V6 Accord. Do not get confused; externally the Inspire is a spiced up new Accord as we know it in India (and in far-eastern markets and the USA too) and what the Japanese market knows as the Accord is the distinct European Accord.

The V6 Accord retains the swoopy sophistication of the car we know, but has a well integrated chrome surround on the grille. The touch is micro, yet effective and stand-out, though the stealth look (especially of grey and black cars) of the basic design stands a bit compromised. The car suddenly looks capable of challenging the likes of the Toyota Camry and the even more flash Hyundai Sonata. Crisp five spoke alloys come with the package and turn signals mounted on the outside rear view mirrors are yet another give-away.The interior theme is also carried on from the four banger and that means comfy leather upholstery which feels and smells good, and comprehensive and user-friendly instrumentation and controls.

This is also the car in which Honda has demonstrated some breakthrough technologies. The top-end model in the domestic Japanese market comes equipped with the world’s first Collision Mitigation Brake System (CMS), combined with Honda’s E-Pretensioner system. I had a chance to try out the system during the day and am glad to say that it really works. The idea, according to Honda, is ‘to prevent collisions through risk assessment and driver warning functions and mitigate the impact on occupants and vehicle damage in the event of an accident’. Now I drove one car straight into a moving obstacle (a bull’s-eye hung from another car) and first received an audio warning, then a tactile warning in the form of the seat-belt tightening across me and then surprise, surprise, the car actually did half of the braking for me. Great when you are into your third dream and don’t like the idea of ramming into the car or truck ahead of you. CMS will not debut in our country but it is still nice to know that technology is moving in the right direction.

The other invention comes in the form of Variable Cylinder Management (VCM) and we Indians will get to sample this in the brilliant V6 i-VTEC powertrain. The new motor fires all its six cylinders only when you are accelerating hard or when high output is required, idling one bank of three cylinders when you are cruising, resulting in stupendous fuel economy. Honda claims 11.6 kpl, which is comparable to the 2400 CC four cylinder mill which powers the base Accord. Essentially, you get to enjoy the performance without burning a hole in your petro-card. This ultra-low emission engine already meets 2012 fuel consumption standards, if that helps you understand things better. The engine uses a variable intake
system, larger intake valves and catalytic converters with low back pressure to breathe better and satiate the performance needs of the enthusiast – with 250 bhp of power and 29.6 kgm of turning force. We expect these figures to come down a bit once the car goes through the homologation process for India.

On the banked, high-speed oval at Tochigi, I took the V6 Accord to its restricted top speed of 180 kph effortlessly. This is certainly one of the smoothest V6 powerpacks in the world today and its marriage with the 5-speed automatic transmission (with S-matic manual override) was undoubtedly made in heaven. Expect the V6 Accord to be one of the quickest and fastest cars in the Indian market. The double wishbone front and five-link rear suspension set-up is tuned for a slightly harsher ride (compared to the base model) since the emphasis is now clearly on crisp turn-ins and even sharper handling.

In India, the V6 Accord will compete with the likes of the Hyundai Sonata V6 and the upcoming Toyota Camry V6 (early 2004 launch). Early indications are that this fully imported (CBU) model will just about nudge the Rs 17 lakh tag – cheaper than the current four-pot Camry! Trust us to treat you to a V6 showdown very soon.