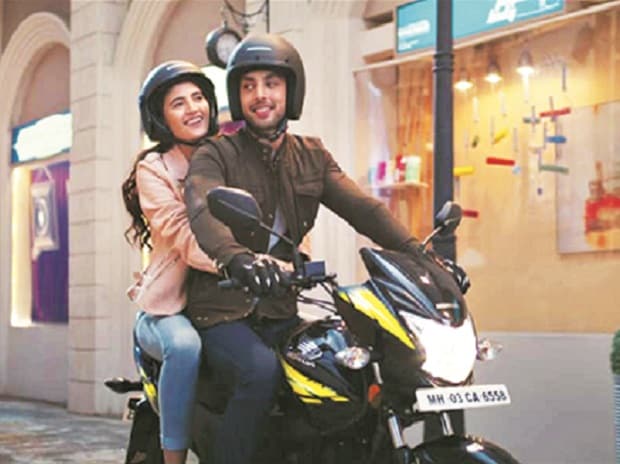 In its bid to gain ground in the motorcycle segment within the domestic two-wheeler market — where Hero MotoCorp leads the race — Honda Motorcycle and Scooter India (HMSI) has launched a range of products in recent years to cater to all kinds of consumers. And its new television commercial (TVC) for HMSI’s CB Shine SP bike suggests motorcycle advertisements have to break away from the traditional imagery that inspire machismo and focus sharply on messaging that appeals to new target audiences.

In the new campaign, “Effortless Style”, the advertisement shows a young couple riding on the bike as a rap jingle announces their stylishness. In contrast to them, a man at a juice shop is seen clasping his loose jeans, as a voice-over explains: “Khishak na jaye, sambhal na padta” (one has to take care it doesn’t slip off). A little ahead they find three young women outside a party hall looking pretty but one is shivering and clasping her arms. The voice-over adds, “Thand me kaapna padta hai” (One shudders in the cold). Next, a man dancing at a wedding procession struggles to keep his goggles in the right place. The voice-over says, “Raat ko bhi din banana padta hai, style ke liye kya-kya nahi karna padta hai” (We treat night as day and what not to seem stylish). Finally, as the couple reaches their friends at a club, it signs off saying, “Lekin ek style aisa bhi hota hai jo hai ekdum effortless” (But one style is such that it takes no effort).

The campaign is designed to reinforce the CB Shine SP’s positioning as a bike for men in the age group of 20 to 30 years, mostly first-time motorcycle buyers who desire a premium and urbane stylish product, says the company. “Honda is India’s most preferred brand in the 125cc executive motorcycle segment. While CB Shine is the choice of mature professionals its younger sibling CB Shine SP is a successful urban commuter with added advantage of fifth gear and digital analog meter. With this campaign, Honda is connecting with the aspirational buyers seeking that extra style and who want to stay a step ahead effortlessly,” says Yadvinder Singh Guleria, senior vice-president, sales and marketing, HMSI.

While actor Akshay Kumar has had a longstanding role of celebrity endorser for Honda, the company has roped in Bollywood newcomer Himansh Kohli to play the biker in the new TVC. The ad was conceptualised by Asatsu DK Fortune. Says Akashneel Dasgupta, the executive creative director of the agency, “The calling card is style and the seamless design of Shine SP makes it effortless to exude one’s unique style. The creative amplification is a commentary on how people try to do that extra bit to come across as stylish which might end up making them look stupid at times, defeating the basic purpose.”

Recently, the company reported that Honda CB Shine sales crossed the 100,000 figure a month in April (100,824) to become the only 125cc motorcycle brand to achieve the feat. It contributes to 55 per cent of Honda’s motorcycle sales, the company added. In recent months, HMSI has narrowed the gap between the company and market leader Hero MotoCorp. According to reports, for the first two months of FY18, Hero MotoCorp sold 1,198,674 units while its market share fell year-on-year from 38 per cent to 31.52 per cent. Honda, meanwhile, sold 1,062,113 units and increased its share from 26.99 to 31.52 per cent.