The ubiquitous autorickshaw, the popular tuk-tuk criss-crossing Indian cities till recently connecting people to their last mile, is now few and far between. Amid lockdown and restricted movement, domestic three-wheeler sales have taken a severe pasting. And August numbers don’t show recovery either.

Piaggio Vehicles, the second-largest in the pecking order, hasn’t released its August sales numbers yet.

Cumulative despatches of such three-wheelers collapsed to 25,488 units between April and July, from 205,516 units in the same period a year ago, according to the data from the Society of Indian Automobile Manufacturers.


The overall volumes were dragged down by market leader Bajaj Auto that controls more than half the segment. The maker of the RE brand saw its sales fall to 11,811 units, from a high of 120,008 units in the three-month (April was a zero-sales month for automobile companies) period.

“With people not venturing outdoors, the income of three-wheeler drivers, too, had dropped 40 per cent, severely impacting their ability pay loan instalments,” said Rakesh Sharma, executive director at Bajaj Auto. This, in turn, also made financiers wary of lending, said Sharma. Close to 90 per cent of commercial vehicles in India are bought on credit.

“I can only say that August is marginally better than July, but it is nowhere close to what we were doing earlier,” rued Sharma, adding that the road to recovery for three-wheelers will be arduous. Before the Covid-19 pandemic, Bajaj was despatching 25,000 units per month on average. 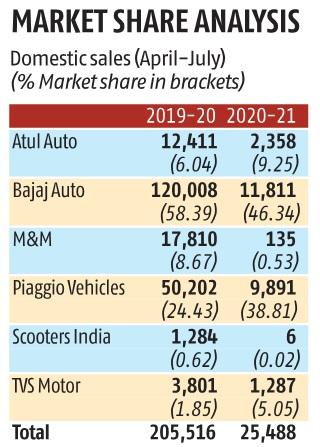 Vinkesh Gulati, director, United Automobiles, vice-president, Federation of Automobile Dealers Associations, said three-wheelers see demand when the earnings are good. This translates into more trips per day, more passengers than allowed, and fewer traffic restrictions. Due to restriction on the number of passengers by local bodies, revenue had more than halved, said Gulati.


The fear of public transport amid the pandemic was dissuading commuters from flagging down a three-wheeler, he added. Reverse migration, too, had weighed on the segment. “Migrant labourers, who used to rent a three-wheeler on a daily basis, are now back home,” said Gulati.


The non-issuance of permits for purchase of three-wheelers has also impacted the segment, added Gulati. The segment had been growing at a fast clip since the past two financial years. It was largely led by a relaxation in getting permits in many states.


Sales, particularly in the passenger carrier segment, are expected to be in the slow lane in the foreseeable future, said an official at a three-wheeler maker. “It is mostly used in shared mobility and people are not commuting within city limits to malls, offices or educational institutes,” he said.  He doesn’t see any major uptick in sales, despite many states opening up after the lockdown since personal transportation is the preferred mode of transport.