The Hero MotoCorp stock was down 1.4 per cent, after the company reported a 34 per cent drop in two-wheeler sales to 0.34 million units for December. The cash crunch and the maintenance shutdown led to weak numbers last month. For the calendar year 2016, the company posted a four per cent growth rate, due to record sales in the festive season with retail sales during that period crossing the million mark.

Analysts estimate that Hero MotoCorp, that has sold five million units in this financial year till date, will end FY17 with slightly more volumes than in FY16.

What aggravated the situation for Hero due to the note ban over the last couple of months is the low finance penetration with only a third of its sales being done via loans. The reason, according to analysts at Macquarie Capital, for lower finance penetration for Hero compared to the other two wheeler makers is its higher exposure to the rural markets. Half of the company’s two wheeler sales come from the rural markets where cash purchases are higher.

What was a negative given demonetisation could however turn positive going ahead. Analysts feel that volumes will see an uptick from the rural markets given the good progress in rabi sowing and higher minimum support prices. This coupled with new product launches, including a 125cc scooter as well as a new motorcycle, in the current year should further help it maintain its market share.

The other reason why analysts prefer Hero to its smaller peers is the latter’s slowing domestic sales as well as their higher exposure to exports. In December, while Bajaj’s sales were down 11 per cent for the domestic market, TVS Motor reported a nine per cent fall in sales.

However, unlike Hero MotoCorp, for whomexports are a minuscule proportion of overall sales, it is a significant 15-45 per cent for Bajaj Auto and TVS Motor. While Bajaj reported a steep 24 per cent fall in exports, TVS exports fell six per cent in December. This could have a bearing on realisations and margins for the two companies. 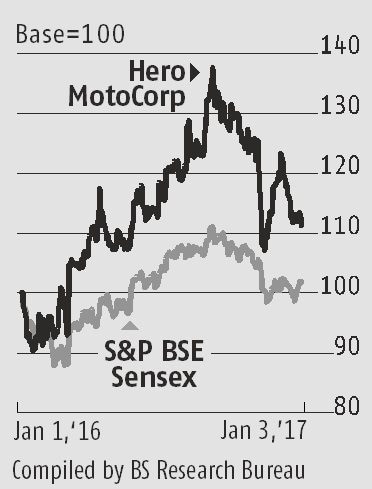 At its current price, the Hero MotoCorp stock is trading at 16 times its FY18 estimates with half of the analysts covering the stock recommending a buy. While the stock is down 11 per cent since demonetisation, given the momentum expected from the rural markets, investors could look at the stock on dips.