Ashok Leyland Ltd’s (ALL’s) stock has gained over 7 per cent in three trading sessions on robust June quarter volume numbers, value unlocking prospects in the near-term, and expectations of a double-digit truck sales growth over the next three years.

The rising proportion of non-cyclical business in overall revenues will keep top line growth steady and less volatile. Analysts at Kotak Securities say recent concerns on slowdown in the truck segment are unwarranted as tonnage growth continues to outpace the rise in volume. This reflects a healthy demand environment and a positive freight growth. The stock, which had corrected 20 per cent from its May highs on worries that easing of overloading restrictions and weakness in freight could hurt volumes, is expected to gain.

The immediate trigger has been upgrades on the back of strong truck volume growth and June numbers. The company posted a 28 per cent growth rate in commercial vehicles (CV) volumes in June, while the same for June quarter was 48 per cent. Analysts, who have recently upgraded the stock, expect medium and heavy truck sector volumes to grow at 12-13 per cent annually over FY18-20. This will be led by freight growth, pick up in road construction, mining activities, and favourable regulatory factors.

The company’s focus on less cyclical segments such as spares, defence and exports is expected to improve their share to 19 per cent of revenue over the next three years, from 16 per cent now.

The turnaround in the light CV business is another trigger. The company outperformed the sector in light CVs in FY18, posting 36 per cent growth, compared to the industry growth rate of 25 per cent. ALL gained 70 basis points market share in FY18 to 8.2 per cent in this segment. Analysts expect the gains to continue, in view of the launches. 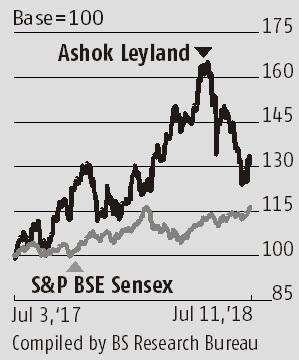 ALL plans to merge its light CV subsidiaries with itself, which according to analysts at IIFL, will be earnings accretive by 8-10 per cent, excluding a one-time tax benefit from accumulated losses.

The other trigger could be listing of its subsidiary Hinduja Leyland Finance (HLFL), the CV financing unit in which ALL has a 61.9 per cent stake. Analysts at IIFL say HLFL is a growing and profitable company. An initial public offering, which is being planned, could lead to potential value unlocking. Currently, HLFL accounts for about 6 per cent of ALL’s sum of the parts valuations.