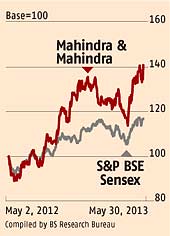 It's been a brutal year for the automobile industry, but most companies in the sector have exited the year on a positive note. Mahindra & Mahindra (M&M) hasn't been an exception. The company has beaten Street estimates on profitability, thanks to higher realisations in its auto business and lower raw material costs. Even as the auto sector has been hit by a sharp slowdown, M&M has managed to beat this trend because of its strong utility vehicles (UV) portfolio. Compared to last year, automotive volumes have grown 11 per cent during the quarter, while tractors declined 4.6 per cent. Strong growth in UV sales has come to the rescue and helped revenues of the standalone business (which excludes Mahindra Vehicle Manufacturers Ltd) grow 11.7 per cent.

Typically, margins don't improve sequentially, as the business environment does not change on a quarterly basis. But M&M has improved the operating margins of both its tractor and automotive businesses during the fourth quarter (Q4). The standalone business reported operating margins of 12 per cent in Q4, a year-on-year (y-o-y) increase of 180 basis points (bps) and 90 bps sequentially. The Street was expecting the company to exit the year with an operating margin of 11 per cent.

Mitul Shah of Karvy says the sequential uptick in operating margins have been driven by lower raw material costs. Raw material as a percentage of sales declined 110 bps to 74.8 per cent compared to the third quarter. Both the segments - auto and tractors - have seen margins improve sequentially. Margins of the farm equipment business grew 30 bps y-o-y and 50 bps sequentially to 16 per cent, while the auto segment's margins expanded 220 bps y-o-y and 130 bps sequentially. Realisations for the auto business rose 13 per cent in Q4, compared to last year.

Analysts expect this margin trend to continue over the next two years. Given that this is a pre-election year, tractor demand could see some recovery. Analysts expect tractor volumes to grow at CAGR 10-12 per cent over the next two years, against the five per cent decline in FY13. Given that tractors enjoy higher margins than the auto segment, blended margins would improve, too. Commodity costs are also expected to remain benign over the next year on weak global demand. These factors should continue to sustain M&M's profit in the current year.