Ashok Leyland’s stock shed 2.2 per cent in trade on Friday, over muted results, the rise in debt, and a weak near-term outlook. Pegged back by a sluggish economy, the transition to BS-VI emission standards, and the loss of sales in March, volumes in the fourth quarter fell 57 per cent year-on-year (YoY). In addition to the sharp fall in volumes, the company lost its market share in the medium and heavy comm­ercial vehicles (M&HCV) segment by 200 basis poi­nts in FY20 to 31.8 per cent.

While revenues were lower, led by the volume fall, realisations on a sequential basis were higher. The company indicated there was a 9 per cent volume shift from intermediate commercial vehicles to heavy-duty vehicles which helped improve realisations.

However, margins at the operating level were down 630 basis points YoY to 4.8 per cent due to higher staff costs and negative operating leverage. While major capital expenditures (capex) are behind it, given weak volu­m­es and maintenance capex, pressure on cash flows is expected to continue in the coming quarters. 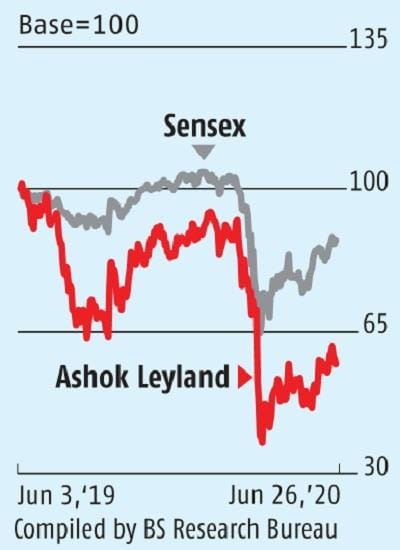 Barring some demand from tippers in the infrastructure segment, volumes have been weak. The vahan registration data for June indicates negligible commercial vehicle sales as compared to an uptick in other auto segments. The company expects some impro­ve­ment as the business cycle picks up and is banking on BS-VI compliant launches in the M&HCV segment to impr­ove sales. The new launches are based on a modular platform, which is expected to reduce the number of components. It also expects some pick up in bus volumes due to social distancing norms.

While the Street will track signs of a pick-up in volumes, the other trend to watch out for is debt. Gross debt of the company which stood at just over Rs 3,000 crore at the end of FY20 has increased to over Rs 5,000 crore after it raised additional debt. Its debt-to-equity ratio is at 0.5 times, while cash on the book stands at Rs 1,000 crore. Any increase in the loans to group companies (currently at Rs 500 crore) will also be a key concern for the Street.


Given the weak demand environment, cash burn and the sharp 23 per cent jump in stock prices over the last month, the risks to an investment in the country’s second-largest truckmaker are high.