The Hero MotoCorp stock was up 1.4 per cent after strong sales in the festive season. But, given the expectation of this momentum continuing led by demand pick-up both in urban and rural markets, and looking at analysts' target prices, there is room for further upsides for the stock.

The immediate trigger has been the news that the company has sold more than 300,000 units of two-wheelers at the retail level on October 17, the day of Dhanteras. The strong conclusion to the festival season follows its record sales in September of more than 700,000 units, its highest ever on a monthly basis.


Analysts highlight multiple reasons for the uptick. The most important one is the rural economy, given normal monsoons after a two-year gap, minimum support prices announced by the government which are among the highest in the past five years and implementation of the farm loan waiver. Sales in urban areas are also expected to pick up, driven by low interest rates and gradual recovery of demand. Analysts at HDFC Securities believe while there is a pick-up in sentiment in both rural and urban areas, there is more pent-up demand in the rural areas.


This should reflect well on Hero MotoCorp’s numbers. Shrikant Akolkar of Angel Broking expects demand to be strong, resulting in double-digit growth year-on-year (y-o-y) for the company in the second half of FY18. In addition to the strong sales momentum, what will help is the low base effect given demonetisation and the transition to BS-IV vehicles. Hero’s sales were down 13-34 per cent in the November 2016 to January 2017 period. 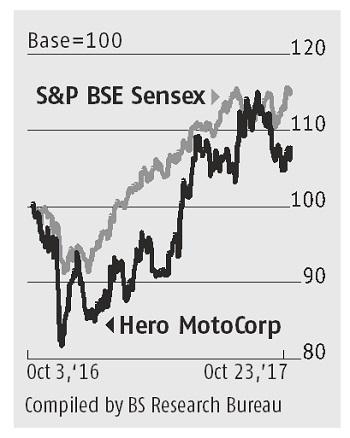 One segment the company is doing well is entry-level motorcycles. Analysts at UBS say the company continues to gain share from Bajaj Auto in the entry segment, despite the significantly lower price of the Bajaj CT100. This, according to the brokerage, highlights Hero’s brand salience, distribution strength and strong execution. Hero’s market share in the entry-level category stood at 60 per cent so far in FY18, against 55 per cent in FY17.

There are, however, a few areas of concern. The company’s limited exposure to the scooter and premium motorcycles segment would hurt given that the two are the fastest growing segments of the Indian two-wheeler industry. Analysts say market share gains in the executive and entry-level segments will offset some of the losses in the other high-growth areas. Further, the company will be banking on higher volumes to improve its margins and minimise the impact from the expiry of excise duty exemption at Haridwar from FY19.


The near-term triggers would be the October numbers which should be strong and the September quarter results. Given that the September quarter is typically its strongest, analysts expect the company to report strong financials (just as Bajaj Auto did) on the back of 11 per cent growth in volumes. Given the expected re-rating and target prices, there could be good gains (13 per cent-plus) in the stock.