Hero MotoCorp set to be new profit leader after 10 quarters

Hero MotoCorp, the country’s biggest two-wheeler maker, looks well placed to emerge as the leader in profit after a gap of 10 quarters.

Consequently, it will overtake Pune-headquartered Bajaj Auto, which had been ruling in profits for 10 consecutive quarters.


Hero MotoCorp sold 1.853 million two-wheelers during the April-June quarter, its highest volume in any quarter. The volume sold is higher by 6.2 per cent over the 1.745 million units sold in the corresponding quarter of the previous year.


Hero will announce its quarterly results on July 25.


The forecasts by five leading brokerages/research firms — Nomura, Morgan Stanley, Motilal Oswal, Prabhudas Lilladher, and Sharekhan — show that the Delhi-headquartered company will clock a profit higher than Bajaj Auto in the first quarter.


According to these firms, Hero’s profit could range between Rs 912 crore and Rs 1,016 crore in Q1 of FY18, showing growth over the Rs 883 crore logged in Q1 of FY17 owing to higher revenue arising out of sales growth even as margins may remain flat or soften.


Revenue is projected to grow 8-12 per cent over last year’s Rs 7,399 crore. Most brokerages have not taken into account the impact that Hero will bear on account of the input tax credit loss incurred by dealers in transition to the goods and services tax (GST). Motilal Oswal anticipates a negative impact of Rs 100 per unit on Hero due to discounts prior to the GST and compensation to dealers. That translates into less than Rs 20 crore.


The forecast of a normal monsoon is a driver of the motorcycle market, and with its large exposure in rural areas, Hero stands to gain. 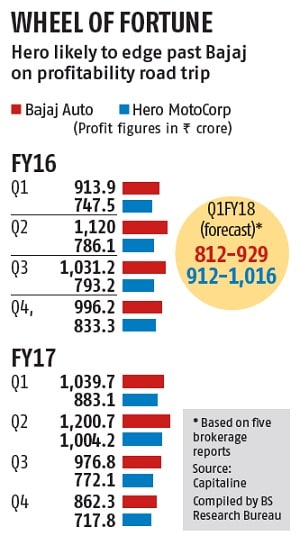 “I am confident that we can continue to grow our market share, and further consolidate our leadership position. We have an enhanced focus on the premium segment of motorcycles, as this category continues to see steady growth. Scooters are also witnessing phenomenal growth and our goal is to aggressively gain market share over the next few quarters with multiple new launches,” said Pawan Munjal, chairman, managing director and chief executive officer at Hero MotoCorp.

Bajaj Auto, the largest exporter of two-wheelers from India and also the largest domestic player in three-wheelers, has seen a volume decline in both the segments. The data of Society of Indian Automobile Manufacturers show its April-June two-wheeler volume declined 11 per cent (to 775,714 units) and the commercial vehicles business, primarily three-wheelers, saw an 8 per cent drop to 112,720 vehicles.


Bajaj will announce its results on July 20.


Bajaj is the only two-wheeler player (among the top seven) to have seen a volume decline in the domestic market when the segment grew close to 8 per cent, helped by growth in scooters and motorcycles.


Bajaj does not make scooters. However, Bajaj Auto also happens to be the most valued two-wheeler maker with a market cap of Rs 81,350 crore at the BSE, ahead of Hero’s Rs 74,940 crore and TVS Motor’s Rs 27,051 crore. Eicher Motors, which makes Royal Enfield motorcycles and also sells commercial vehicles, commands a market cap of Rs 75,934 crore.