Country’s largest two-wheeler maker Hero MotoCorp is confident that a double-digit growth in two-wheeler sales will sustain in the near future.

The company is witnessing a double-digit growth after two consecutive years of flat performance, hit by challenges of drought and demonetisation.


“The 2017 calendar year has been a record one for Hero and we sold seven-million units. In the April-December period of this financial year, the growth has been 11 per cent. This has come, despite the challenges we faced in last April on the transition to BS-IV emission regime. There was deficient rainfall in some states but the festive demand was strong for both motorcycles and scooters,” said Ashok Bhasin, head of sales & marketing, Hero MotoCorp.


The domestic two-wheeler industry has grown at 10 per cent in the April-December period to sell 13,493,749 units. Bhasin said the trend should continue. “We only expect the growth momentum to pick up further. Rural market is on a good recovery path and will continue to contribute,” he said after unveiling its new product — Xtreme 200R — which is aimed at expanding its presence in the premium motorcycle segment. The 200cc bike will hit the market in April when the price will also be announced.


Bhasin said the company had consolidated its position in the commuter bike segment and would now continue to take action in more segments, including scooters and premium motorcycles. “The aim is to build on our leadership by playing in multiple segments of the industry and expand in areas where we are under-represented”. Hero gets 88 per cent of its sales volume from motorcycles, while the contribution of scooters is just 12 per cent.


Hero has expanded its network by adding 400 touch points in this financial year. The current network has 6,500 touch points, the biggest in the industry. 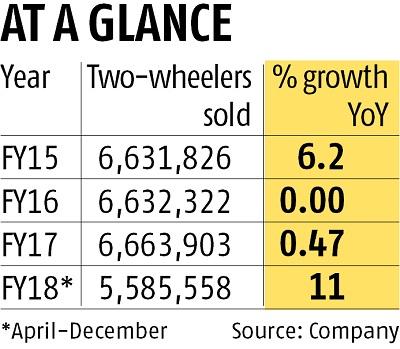