Hero MotoCorp reported a better-than-expected revenue performance for the December quarter, supported by a 16 per cent growth in volumes.

Sales in the quarter were up about 15 per cent to Rs 73.05 billion against estimates of about Rs 71 billion. While volume growth was strong albeit on a low base last year, realisations came in lower. However, adjusted for the goods and services tax accounting on spares, realisations have matched revenue growth.


The company’s management is confident of maintaining the current momentum and said the sector would achieve double digit growth in FY19. Given the dominance of Hero MotoCorp in the executive segment of motorcycles, analysts said incentives to improve rural incomes as well as rural infrastructure should boost overall volumes and help it to outperform the sector.


Besides motorcycles, the company put out a strong show in scooters, with volumes in the reporting quarter rising 17 per cent year-on-year. Its market share in the scooter category has increased by 200 basis points to about 14 per cent over the start of the fiscal year.


The company is also looking at making inroads into the premium motorcycle segment and had launched the Xtreme 200R. It is expected to launch more models, both premium motorcycles and scooters, in the coming quarters. Both these segments are growing much faster than the overall two-wheeler market. 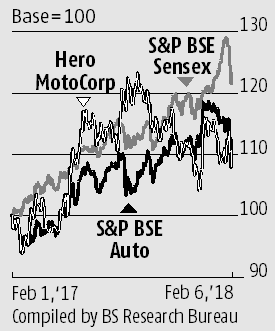 The biggest headwind is the withdrawal of excise benefits at its Haridwar plant, which accounts for a third of capacity/production from April 1, 2019. Increasing competitive intensity amid rising raw material costs will limit the extent of price hikes the company can take. What will offset some of the pressures is tax breaks at its new Halol plant, savings from the cost reduction plan, and operating leverage as volumes grow.


Analysts said there would be a 30-50 bps pressure on margins if all these factors are taken into consideration. While Hero is well placed, given the government’s rural focus, the Street will keep an eye out for the margin movement in the coming quarters.