Hero MotoCorp may ride on to bumpy road, muted demand may impact revenue

The stock of Hero MotoCorp is down over 5 per cent over the last week on worries that muted demand and rising competitive intensity will impact revenues as well as margins. A slew of brokerages have downgraded the stock, given the headwinds faced by the sector as well as the largest two-wheeler maker.

Most analysts are worried that higher pricing pressure especially in the entry-level motorcycles, which accounts for a third of Hero’s volumes, would force the company to initiate price cuts aggravating the situation. Analysts at Reliance Securities say that the market share fall witnessed by the company could force it to take pricing action.


Amidst slowing sales, any pricing action to regain some of the lost market share is expected to be negative from the margins standpoint.

Analysts at IIFL believe that rise in commodity prices and a weak rupee may hurt profitability in the December quarter. Further, given higher marketing spends in the second half as compared to first half, margins will remain under pressure. In addition to the margin worries, earnings will be under pressure due to expiry of tax incentives at the Haridwar plant with tax rates going up to 32 per cent this year as compared to 29 per cent in FY18.


After double-digit growth in the first half of the financial year, the Street will keep an eye on how volumes pan out in the second half, as growth softens. Given the weak sales over the past couple of months, dealer inventory has increased to five and a half weeks as compared to half that number in a normal month. A strong marriage season demand is necessary for the inventory to clear and overall sales to improve. 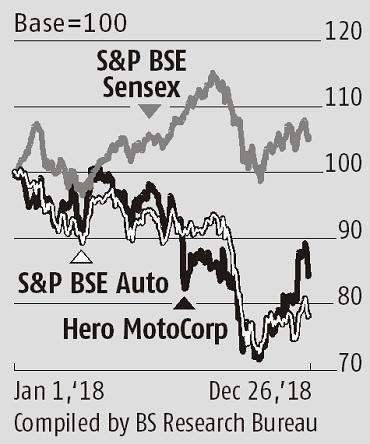 Though there has been some respite on account of lower running costs — with fuel prices coming down and easing liquidity crunch — brokerages are awaiting clear volume growth trends before changing their cautious outlook.

Analysts at Goldman Sachs have downgraded the stock for its heavy dependence on stagnant commuter motorcycle segment, weak position in scooters and premium motorcycles, lower exports and falling margins.