Hero, which posted volume growth of 5.5 per cent year-on-year in the September quarter, is banking on higher rural growth and new launches to improve volumes.


The two-wheeler segment is grappling with higher cost of ownership due to changes in upfront insurance payment, higher fuel costs, increasing financing costs as well as price hikes implemented by manufacturers.

The country’s largest two-wheeler maker indicated that demand is reviving, after initial hiccups, due to uncertainty on pricing of vehicles. The company will be looking at new launches, such as the premium bike Xtreme 200R and two 125cc scooters, in the current festival season to boost its overall volume growth. Hero’s growth in the first half of the current fiscal year has been 10 per cent.


While the Street will closely look at the demand uptick, the other area of focus will be the ability of the company to hold on to margins given the uptick in commodity costs and a depreciating rupee. 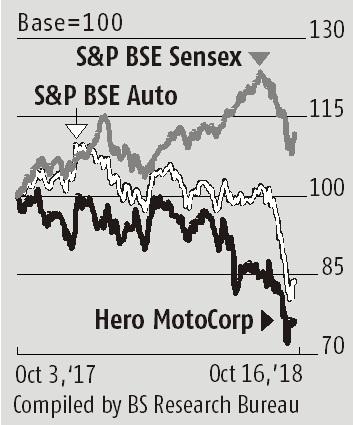 Margins in the September quarter, at 15.2 per cent, were 220 basis points lower than the year-ago quarter, though they were in line with estimates. The firm has indicated three levers to minimise cost inflation. It has been implementing price hikes, with the latest coming into effect from the start of October — its third in FY19. It was higher price hikes that helped it post better revenue growth of 8.7 per cent in Q2, even though volume growth has been at 5.5 per cent.


The other margin levers for the company are the ongoing savings programme and operating leverage.


While the saving programme will continue, how much the company can extract from higher volumes will depend on the sales growth trajectory here on.


Though the company is confident of rural-led demand, multiple headwinds, both on the total costs of ownership as well as financing, could put a spoke on the volume optimism.