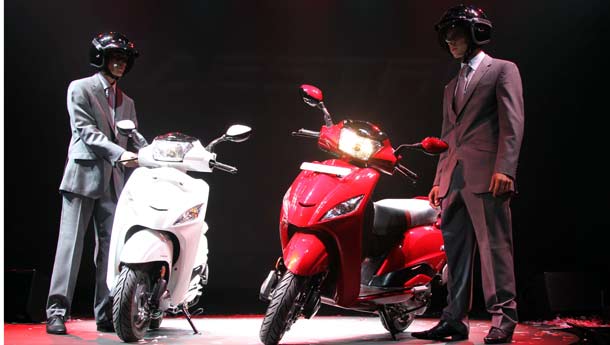 Hero Honda is now Hero MotoCorp and this transition was announced in London earlier this month. At the event, two new two-wheelers were also unveiled and they consist of one motorcycle and one scooter.

Called the Impulse. the motorcycle is powered by a 150cc four-stroke motor, which in all probability, is derived from the Unicorn powerplant. Which is a good thing, since the Unicorn is well known for its reliability and refinement in addition to its frugal fuel consumption.

The frame of the Impulse, we reckon, gets inspiration from the Honda NXR that is sold in Brazil. If you look closely at the photograph, it is evident that the rear tyre is a Ceat product and is mounted onto a 17 inch rim. That would peg the front hoop at about 19 inches which is perfect in keeping with the machine's on-off road design philosophy. A long travel front fork and a rear monoshock (the first to come from the Hero stable) handle the suspension bit while various dirt bike must-haves like the knuckle guards, raised fenders and a muffler perched aloft complete the motorcycle.

Ever since the SX Enduro was launched boldly by Bajaj eons ago, which unfortunately bombed soon enough, not a single manufacturer body in India has dared go down the off-road motorcycle path till date. Things have changed since the SX's days and we already see a market for such motorcycles in the country.

Although the Impulse is a game changer, the Maestro, on the other hand, seems like it has already been around for awhile. The 110cc scooter, in all likelihood, gets its engine from the Activa and Aviator. We also spotted the typical Combi Brake torque arm on the front brake, complete with the two cables extending from it. On the styling front, the Maestro is rather conservative, with strong references to the Activa that is currently now on sale.

If these strong ties to Honda may surprise you, its all because the Japanese company has agreed to share R&D resources with Hero MotoCorp till 2014. With Hero now investing heavily in getting its own R&D facility alive and kicking and by going all out to net in the best brains in the business which has resulted in refreshing products like the Impulse, MotoCorp definitely has a bright and exciting future ahead. Now that is certainly good news for us motorcyclists!