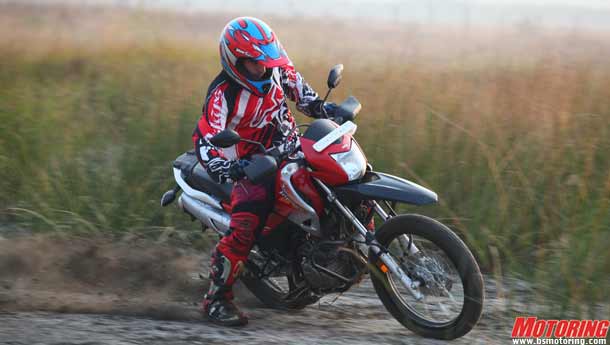 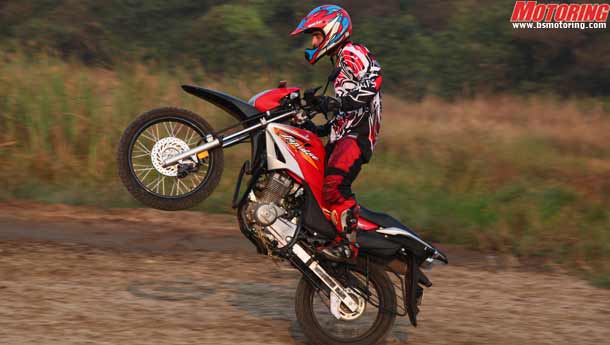 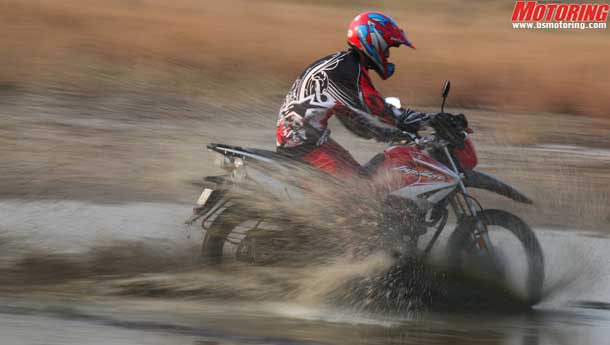 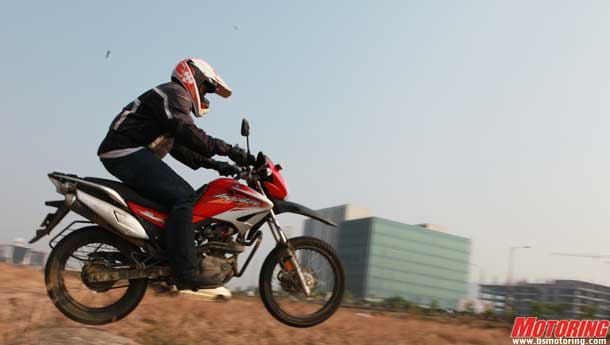 Complete disconnection. Paradox, that. There is an association with the world. The elements are few – you, the motorcycle, and big air. In fact, the connection is at its unpolluted best. Time is running out. Unfortunately, such liberties don’t last long. A second, perhaps two, but that’s about it. The silent dramatics of getting airborne, just a couple of feet high, on a motorcycle.

‘Perfect landing’ says Malcolm. That’s more reassuring than the silent thunk of the motorcycle touching base. You’ve seen Malcolm Ilavia, to give you his full name, on these pages before. A professional (and brilliant) motocross rider, he takes no time in dishing out his entire motocrossing skill set on available real estate before your eyes. After which, like all brilliant chaps, he will tell you, matter-of-factly, how it’s done. And then, he’ll urge you to try it out while making it sound as simple and easy as boiling milk (When it starts spilling all over the stove, it’s done, SIMPLE! – Anon. If you’re chicken, you’ll end up with a half-cooked evaluation of yourself and the motorcycle. This motorcycle likes to be pushed further. Be reserved, introverted on it and you’re not getting any dessert.

Malcolm’s here to do just that. To ride the Hero Moto Impulse armed with all the passkeys required to understand the motorcycle on the one aspect that has been largely untouched by any Indian motorcycle in over a decade – off-roading. Apprehensions about the 13.02 bhp Unicorn motor need to be put on standby – a motocross (motocross is a narrow segmentation, yes, but more convenient than repeatedly typing on/off-roader, so kindly adjust) machine relies most on its dynamics package than on sheer horsepower. With the right kind of suspension and steering, even a 7 bhp four-stroke motor can provide sufficient thrills. So why didn’t I toss the keys at the good man and cool off in the shade? Firstly, I’ve been extremely keen on riding this motorcycle in the right environs and secondly, because it needs to be proven that even the everyday street-commuter types (I am one) can, with a little bit of practice, have immense fun on this extremely enthusiastic bike.

I spent, with much intent, a fair bit of time riding the Impulse around urban places of interest – malls, cafes and the works – in the name of feedback. Most people thought it was at least a 200cc machine. Nine out of ten were quick to register the longer front forks and different rim sizes. Everyone, from the hip college-goer to the has-been motorcyclist, thought the Impulse was ‘cool’ – an important factor if you want to sell volumes. Oh, and the sound of ‘66 thou, ex-showroom’ created what could be best described as a mild electrical current being passed under collective feet. Well done, then, Hero Moto!

The Impulse is, once you acquaint yourself with the softly sprung (a bit too soft, perhaps) front-end, and the braking (which isn’t) a very useful tool in urban conditions. Potholes are dismissed gracefully and you needn’t really brake for small speed breakers at all. Its 14 kg weight advantage over the CBZ X-treme translates into very perky performance in flowing traffic. The Ceat on/off-road spec tyres lean more towards ‘off’ than ‘on’ and if you fail to acknowledge that, you will, sooner than later, end up with bruised knees. It is also important that you favour the rear brake more, since a disc/knobbly/concrete-road combination is, generally, rather hostile. Once you have the motocross dynamics covered, you’re in charge of a motorcycle that strongly reads out to you, line by line, all that you’ve missed out on in all of your motorcycling years.

I enjoyed riding the bike in traffic, think it’s quite zippy, didn’t like the Unicorn-esque exhaust note one bit and thought a little more horsepower (two, even) would have added much more to the Impulse’s character. It’s quite at ease on the highway, the mildly authoritative riding position (upright, with wide handlebars) always reminding you of the motorcycle’s adventurous genre, as it holds a 100+ kph without pronounced signs of stress. Yes, it is an easy target for crosswinds and because the front-end is light, a determined yank at the ’bars even at triple-digit speeds (not that we endorse such behaviour) can see the front wheel lift off a few centimetres! And if the chaps at Hero Moto are reading this, Malcolm suggests you offer the motorcycle with a proper motocross handlebar (with a cross-beam) which prevents the handlebar from bending in the case of a spill – which is a regular entity of riding off-road, irrespective of experience.

Finally, time to tell you what it’s like in the dirt! Let’s say, in short, this motorcycle can take everything you can give it and then some. Yes, 14.2 bhp would have felt just a fraction better than the existing 13.02, but no offence – this motorcycle has capabilities the seasoned sub-250cc performance motorcyclist hasn’t touched base on yet. Lean it as low as you can, look where you want to go, keep your body supple as a feather, counter-steer as much as your imagination allows, tap the rear brakes ever-so-slightly (invaluable input from Malcolm) while modulating throttle input (full-throttle is pointless. Slides need to be optimal – too wide is good for thrills, but you’re going slower) – dirt is home turf for the Impulse, no sweat. The 19'' rear/17'' front set-up works beautifully in conjunction with the suspension and when the power upgrade has to come, this chassis will only be willing to accommodate.

Is Hero Moto’s first all-new motorcycle since its split with Honda a winner, then? On most fronts, yes. It is a focussed, functional, fun motorcycle while, importantly, being extremely good value for money. Its versatility is endearing and it will, unless the competition is brewing something similar, stand out in a crowd. And if this is of any assurance to you, Malcolm, who rides a litre-class superbike on an everyday basis, is going to buy the Impulse. That makes it the two of us, then.