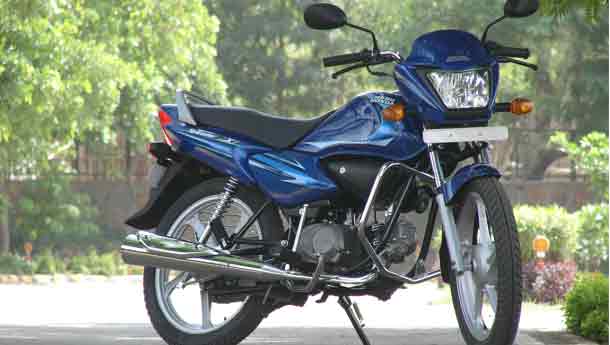 This could have been big news. I mean on the same scale as Aliens Invade America, Bush says, ‘We Crushed Iraq, We Can Take ‘Em.’ It would have sped at the speed of light around the Earth and all the great motorcycling nations of the world would have sat up and listened. The incredulous reaction would have poured in from around the planet, ‘I can’t believe Hero Honda stopped the beloved old Splendor... I’ll miss the black stripe... Why?’ etc.

Fortunately, all of that is conjecture. As is the case with Hero Honda, the standard press conference question, ‘Will this model replace the old Splendor?’ (other examples include, what is the price?; R&D expenditure; sales targets; when is it available; can we eat the lunch now and what, no booze? Okay the last two are just attempts at levity and hold no soda). Sorry about that, Hero Honda clarified that the old Splendor would carry on and the NXG would wear Splendor badging, some new clothes, the new motor from the CD-Deluxe and as an option, alloy wheels.

We got to ride the Super Duper Splendor ++, er... NXG at the same Hero Honda Safety School in Gurgaon where we first rode the CBZ X-Treme. On a Splendor, the school’s fairly small network of roads seemed more to scale and truth be told, I enjoyed the morning spent in the saddle.
The NXG feels very light, and requires very little effort to get stuff done. The drum brake up front looks like a bit of an anachronism now, but works as advertised. The 5-spoke alloy wheels weigh the same as the spoked version and cost only Rs 1,000 more, which make them a great incremental upgrade.
The motor feels at ease, refined and certainly has good bottom end torque. I could roll back on the throttle in top gear at as low as 13 kph and it struggled but wouldn’t stall. The bottom bulge does reflect in the weaker top end, and the NXG begins to run out of breath as soon as you’re past 70 kph. But given that its primary customer will probably ride at about 40-50 kph at best, the bike feels quiet, sorted and yes, very much like a slightly updated new Splendor. Wearing a good tubular double cradle and 2.75-18 MRF tyres at both ends (What? No Mystery or Magic?), the Splendor feels – like the Super Splendor or the Glamour – capable, but neutral to hard cornering antics. Ride quality is great over sharp bumps and decent in general too.
The new body panels are quite neat, the tank looks a little Caliber-ish from some angles, but the knee recesses are nice. I wonder why HH didn’t go the whole hog and give it a flush fitted gas tank cap, though. The sidepanel works better on the NXG with the black mass of the lockable black things under the tank too. Oh and the NXG has an aluminium grab rail.

Having buzzed about for a good morning’s worth, the impression I got was the Splendor NXG was a very clever product. It carried forward all of the best parts of the Splendor, and still managed to feel fresh and renewed, which is what Hero Honda were aiming to do with the NXG. Well, they’ve done it. I believe HH could have replaced the old   Splendor with the NXG in one fell swoop,but as they say, it ain’t broke...