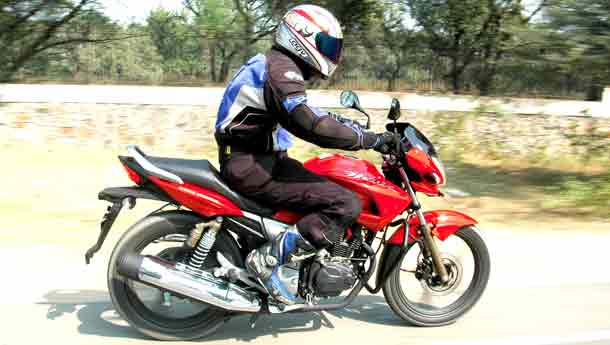 When the Bard wrote ‘A rose would smell as sweet...’ he could not possibly have imagined that there would, in a couple of hundred years time, be a company called Hero Honda. A giant motorcycle corporation that would boast naming greatness only rivalled by the Japanese, who regularly buy cars officially named Bongo Frendee. Yes, that name really bugs me. Hunk? It’s like having a friend called Muscle, or a dog called Hair. I am deeply disturbed by this name for a mobike, and there are hundreds of naughty one-liners that I can think of (that I wouldn’t dare print) that gleefully employ that word’s peculiar semantic proclivities.

The heart of the motor is a re-painted CBZ X-Treme engine – or at least that’s what I think it is. The power and torque claims are identical and frankly, from the saddle, I thought the Hunk felt the same as the CBZ X-Treme to ride. However, Hero Honda says that ‘the piston pin has been inclined,’ and that the engine now incorporates tumble flow. Tumble flow is like swirl, but in the vertical plane. Tumble flow promotes turbulence, which helps combustion (completeness and burn speed) at low engine speeds. This means the Hunk should be making more torque at lower engine speeds, but as I said, it felt like a CBZX to me. Maybe that’s because the engine was brand new, and a longer ride on a machine with more miles on the clock will change my impression. On the whole,it’s a likeable engine. Vibes are well-controlled, it sounds roughly like the CBZX as well, and the gearbox is a neat, slick one.

Like the CBZ X-Treme, the Hunk is pretty eager to get going, and it is a hard motorcycle not to like. Of course, unlike the CBZ X-Treme, the Hunk is genuinely good looking, from almost every angle. I love the way the matte black panels work with the brightly painted ones and give the bike an extremely modern, fashionable look. Following another rider on an all-black Hunk, I was startled to note that the GSX-R’s tail-end looks extremely similar... and I mean that in the nicest way possible. The tank extensions are huge, though. I might even use the word cartoonish, but the truth is that they feel good to grip with the knees, and from most angles, look great. They also help the bike grab attention, which, Hero Honda reiterates, was part of the core design brief for the bike.

The headlamp, good looking as it is, is my personal weak styling part of the bike. While the new fairing looks neat, I think the simple shape of the headlamp is a missed opportunity. Hero Honda could have continued the sculpting, so evident elsewhere, and actually gone either the new naked Hornet way, or reverted to the raw power of a well-designed naked headlamp. Oh well. Further, while the extended gas reservoir looks good, I cannot help but think that a more thought-through exhaust would have worked wonders for the looks, as would a less obtrusive grab rail. Hell, I almost mistook it for a spoiler first. Hunk Evo 1? I exaggerate, of course.

On the move, many things remind you of the CBZX (a good thing). However, the suspension is not one of those things. Like the CBZX, the Hunk should be a great cornering machine as well. But while the Hunk turns quickly and is stable like the CBZX, the suspension settings aren’t quite as good. In bumpy corners, I felt the new gas shocks at the bike working too hard. Similarly, the front end felt a bit loose as well. I will ascribe this to my particular test bike for the moment, and will re-address this at road test time, if you don’t mind. Er... same sort of story on the brakes too. Once more, I will beg your indulgence – allow me to hold the opinion until I’ve grabbed another Hunk and ridden it hard. Er... that’s not quite how I meant it.

Dynamics aside, the deeply dished saddle feels good to sit in, and I have a feeling pillion riders will like the Hunk as well. I also like the little touches that Hero Honda has added to the bike. They’ve separated the fiddly lid-lock-cum-seat-release, so that the seat release is a neat keyhole on the tail piece. Unobtrusive, useful and very, very welcome. Many, many manufacturers need to learn from this. Removing a fiddly side panel to eject the seat is just painful. However, in the process, the helmet lock is now part of the saree guard, so you will lose that if you remove this. But again, I know no one who actually uses that thing to lock a lid with.

But before you think Hero Honda got it all right, hold on. The company said at the launch that the Hunk was about raw appeal. And the omission of the digital dash and the LED tail lamp, evidently, are supposed to evoke that appeal. Well, I for one don’t buy that. I would think that a new 150 should do everything the competition already does, and then do more. These two features, which, ironically, are available on the entry-level XCD 125, have gone missing from an otherwise likeable bike. Another missed opportunity, I think.

But all said and done, when you get off the Hunk, you cannot help but like it. It has enough of the feisty CBZX in it to keep things interesting, and at the same time, it looks a million bucks better. At Rs 500 less, there isn’t much in it, but I have a feeling that I would forego the CBZX’s LED tail lamps for a night out about town with a Hunk any day. (Would you, now – Bijoy)Hero Honda says the Hunk prices will be Rs 55,000 and Rs 57,000 ex-showroom for the kick-start and electric-start models. They expect the Hunk to help them double their strength in the premium segment. Personally, I think more power would have helped the Hunk make a much bigger impression, but despite that not happening, I think we’re going to see a good number of Hunks roaming our streets in the near future.