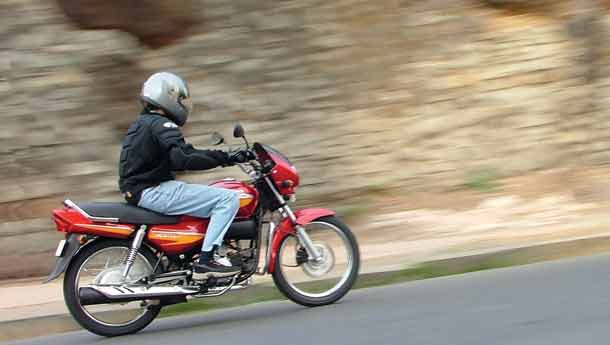 The voice on the heavy-duty music system at the Hero Honda Glamour launch was going on about, ‘path-breaking stripes.’ No wonder the forecast was for overcast skies and heavy rain. And the pic in the presskit vaguely reminded me of a former cinestar turned current politician who had a pronounced proclivity for a wardrobe that’d put the most resplendent Bird of Paradise to shame.


What I’m trying to get at is that the Hero Honda Glamour is not for the faint-hearted. Which is what the manufacturer said, come to think of it. They noted from their customers that there was a clearly defined bunch of chaps who desired a commuter with all the virtues of the Super Splendor but wanted it to stand out. Not in terms of blazing performance that’d blow 150s into the half-submerged weeds, but in terms of looks. The result is before you.

Taking the body panels from the Ambition, a completely new fairing, ten colours of paint (ranging from ‘in your face’ to ‘you’ll need shades’) and the aforementioned ‘path-breaking stripes,’ Hero Honda created the gobsmacking new Glamour. A machine so flashy, it makes pimped out Bentleys look dull.

I can’t say that anyone at BSM really digs it, but I can emphatically state that it’ll put a stinging impression on your retina that’ll stay for days.

Under the shiny, bright bits is the Super Splendor’s double cradle frame. The frame is painted the same superb dark grey as the engine and that’s a classy touch. More manufacturers should do this. Above the engine, the usually matte black blobby cubby hole has been styled into a neat grey faux air scoop. Unfortunately, the real box cover is under the panel. Which is fiddly – why couldn’t the ‘scoop’ have doubled as the lid itself?

You might wonder why the road test seems to be agonising over the looks. Well, that’s because most of the Glamour’s story is the looks. The powertrain is the same as the Super Splendor, and in as much, this test doubles as a test for the Super Splendor.Honda’s efforts in making the new engine a worthy successor to the 97.2cc motor is truly admirable. Not only does the 124cc horizontally mounted engine feel better, it also feels like a natural extension of the original. Except in performance terms, that is. Put on a digital odo and show it a carefully measured amount of fuel and the numbers just keep on rolling. The Glam will put out 89 kpl at a steady 40 kph, a number that scarcely drops overall. 78-82 kpl is possible in everyday riding. Attention ecoweenies! A night long beer party is due. It’s a triumph for sustainable development.

However, the 9 bhp peak power is a side-effect of the displacement and not the other way round. So the Glamour (and the Super Splendor) is distinctly slow off the mark. Compared to the class performance benchmark, the Glamour is almost 1.7 seconds slower to 60 kph, taking a leisurely 8.22 seconds (the 8 kg lighter Super Splendor takes 7.92) to 60 kph. We’d put down a 100 kph time, but that’s only possible downhill. Flat road top speed is a slow 96 kph, again 10 down on the 125cc benchmark.

But that isn’t what the machine is about. Peak torque is 1.05 kgm at just 4000 rpm, and the curve is flat quite early on. Jam a hefty pillion on, slot the slick gearshift into top gear (What? No fifth?) and putter along. From 30 kph to top speed is all delivered with a calm, unruffled composure. The mill cannot  be stressed. Roll on the throttle at any speed and the well-spread out ratios and constant torque will push up the speedo needle without effort. It’s not quick, but it gets the job done.

The powertrain is as refined as Hugh Grant at a Royal Ball, though. There are no vibes, no untoward noises and no furrowed brows. Take a brand new machine on a top speed run and the bike won’t change a note.
The double cradle frame is quite a work of engineering as well. It’s stable in corners, the rubber (2.75 and 3.00x18s) is adequate and the Glamour is, hence, easy to corner. There could have been a more ‘sporty’ flavour, while the Glamour dances to apexes and out with a more straight-faced sort of competence.

The big flaw in the package is that drum brake. We’ve tested the Super Splen with a disc and that is nice. The Glam’s drum is a dud and it only adds unsprung weight. Squeeze the lever with both hands and you’d be forgiven for thinking that you had a speedway bike – no front brake was specified in the rule book. Seriously, I think its time we consigned the front drum brake to a museum. On all bikes. All of you out there, please pay the premium for the disc. This is a no-brainer.

The longer we rode it, the more we realised that the Hero Honda Glamour is best described in one word: adequate. Its got just enough power, just enough handling prowess, brakes just hard enough (with a disc), rides well enough (there are more plush, and more sporty 125s) and is comfortable enough for long commutes. Enough enoughs!

Where the Glamour shines (nicely) is the flow of torque and superlative fuel economy. And yes, it is a bit bright. Should you put your money down? If all you want is an obtrusive commuter, yes. It is value for money, petrol is sipped carefully and it’ll probably hold its resale value well. To put it in a nutshell, it isn’t outstanding but it will stand out.