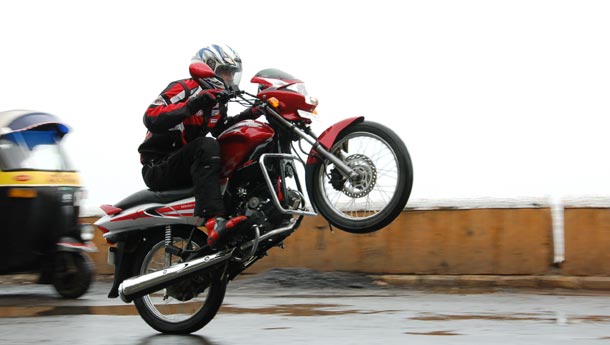 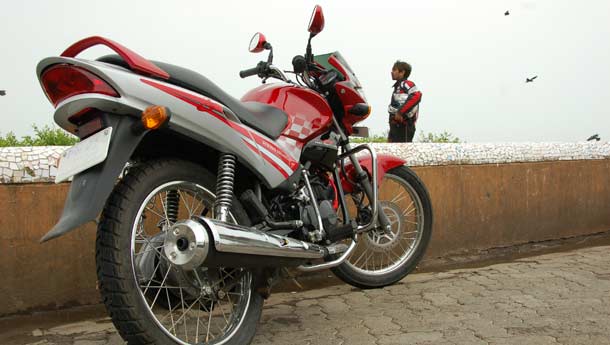 My most embarrassing moment? Taking the first fuel injected motorcycle in the country out for a spin and, soon after, becoming the first Indian to run the bike dry. A chap asks me about the bike. I patiently explain the Glamour FI’s USP to him. He shrugs and says, ‘Still runs out of fuel, eh?’ I shrug back and tell him, ‘That’s not the bike’s fault, it’s Joshua’s.’ He walks away thinking, ‘Wiseass!’

Current situation notwithstanding, I’ve had a good time on the bike. But before I go into that, I’ll just quickly recap the Glamour/Super Splendor story. The Super Splendor and the Glamour were launched with the intention of allowing commuters to upgrade to 125cc motorcycles from their 100cc staples. The 125cc motor was an all-new design, but stuck to the almost standard double-cradle frame and horizontally mounted cylinder configuration. Along with the relatively minor jump in power and torque, the ‘Quantum Core’ motor brought a roughly 5 kpl rise in average fuel economy.

On our tests, both bikes proved to be good motorcycles, if not the most exciting of the 125s out there. The engine felt solid, the gearbox was positive, handling was efficient and the ride quality was eminently acceptable. We did have our cribs of course. We still maintain than the Glamour’s colour and stickers are a bit (Here he is, ladies and gentlemen, the Understater – Joshua) over the top, while the Super Splendor looked simple rather than super. In the showrooms, we’re told that while the Super Splendor did fine, the Glamour found fewer takers than expected, especially since Govinda is a politician now, and no longer a champion of violent colour composition or pelvic artistry.

Since the two launches, Hero Honda had been quiet until Pawan Kant Munjal, the managing director of the company, announced that a fuel injected small capacity motorcycle was due for launch. He revealed this during the company’s 2005-06 financial results release. He also said that counting variants, Hero Honda is planning eight launches within this financial year. The Glamour FI is the first of them. Visually identical to the older Glamour, the FI sports Honda’s trademarked electronic fuel injection system, PGM-FI. If the abbreviation seems familiar, it’s because the system by this very name has already been seen in India, on various Honda cars.

But there is a difference. PGM-FI has largely been a er voluminous system, too heavy to be ported to a small motorcycle directly. In fact, a Honda technology growth path release about fourteen months ago said that Honda would focus on improving the performance (in emissions and efficiency terms) of small motorcycles. The release mentioned two specific directions. One was fuel injection (which has found its first broad application in the Glamour FI) and the other, hold your breath, was twin spark plugs. Did I hear someone giggling in the back just now?

Honda’s engineers worked on the ‘standard’ PGM-FI system to develop what they call an ‘ECU-integrated throttle body module’ for an EFI system for small motorcycles. The goal behind the project was to reduce the total emission of hydrocarbons from new vehicles by roughly one third, while simultaneously raising fuel economy by thirty per cent. The baseline for the changes was taken as 1995 and the project was supposed to deliver the hardware in 2005. The Asaka R&D centre, where the project was orchestrated, realised that small motorcycles are the staple of many countries and therefore success in the project would be very good for a large number of prospective Honda customers, and the countries in the general.

The project was, of course, not dedicated to the Glamour FI, but clearly mentioned that air-cooled 125cc or smaller engines were well within its ambit. The Asaka men successfully downsized the components of a PGM-FI system (its bulk meant that cars and larger capacity motorcycles have been its primary users) to fit a much smaller format.

The Glamour FI is the first of the Indian Honda motorcycles to incorporate the results of that project. Honda has since announced that PGM-FI will become common and it plans to install it on most of its worldwide motorcycles by the end of 2010. The Honda Wave 125i, a Thailand market step-through that boasts the system, has been in the market since July 2003. From what we can tell, the first of the PGM-FI small capacity brigade was the 125/150 Pantheon which was launched in Italy in December 2002.   To return to my ride, I wasn’t really expecting the Glamour FI to be that different from the carb Glam. Visually, the FI is even more of a tart than the stock, now sporting plasticky body coloured rear view mirrors and a similarly coloured grab rail at the back. The faux scoop in the front of the tank is now in black, and bears the PGM-FI script. As usual the motorcycle felt well built and all of that, but over the bumps there was a constant rattle. We traced it to the lockable oddment space below the faux scoop. Its lid is mounted a bit loose and makes a bit of racket.

A thumb on the starter is enough to wake the motorcycle up and even at idle you can see that there is a change in the engine note. Not by much, but the 125cc motor feels a bit quieter and even more sorted than the carburetted equivalent. Rolling off and snicking through the first three gears brought back two memories. Bad one first. The cursed shift lever is still in the building. The stupid pedal style shifter panders to whose who heel shift Hero Hondas up the ‘box. God forbid you’re a rider who likes to use his toes only. To a man, all of us at BSM hate these for-the-commuter devices. Anyway, the good news is that not only is the gearbox as smooth as I remember it, the motorcycle itself has gained a new-found
blissful feel.

Off the bottom, the delivery is very reminiscent of the Honda Shine. It purrs (really) into the mid-range with an effortless, seamless urge that feels both stronger and more crunchy. My repeated attempts at tripping up the system by rolling on the throttle at odd times and in extreme amounts came to nought. Open the throttle and a very linear, progressive power delivery greets you every time. Lovely. And unlike the Shine, which feels very upset about crossing 70 kph, the Glamour FI boasts a slick top-end feel as well. Everytime I neared its top speed, the engine lost no composure and kept plugging away with an impressively smooth feel.

In actual performance terms, the Glamour FI isn’t that far ahead of the regular Glamour. I quizzed the showroom staff while collecting the test bike and they said that the FI promised about 5 kpl more, and was just a bit quicker/faster than the regular Glamour. This doesn’t check out. Where our carburetted test Glamour returned a stunning 79.5 kpl in economy-biased riding, the FI returned 81 kpl, which is a very minor difference.

Truth be told, if my bike already returned 80-ish kpl, I really couldn’t care less. In straight line performance terms, we clocked a 8.05 second run to 60 kph, which is 0.15 seconds quicker and the top speed was 97 kph, one click faster. Which is as it should be, for the claimed power and torque figures for the new motor are identical to the old one. Both make 9 bhp at 7000 rpm and 1.04 kgm at 4000 rpm. And they weigh the same as well, so the performance has to be similar. In all fairness, you’d be hard pressed to notice. The smooth delivery, great throttle response and the humming engine will never cause you to doubt its effortless feel.

But there is a crucial difference between the FI and the old one. While we liked the Super Splendor/Glamour, it didn’t make us smile. It was a good motorcycle, but not an involving one. The FI can yank a smile or two out of you.

The rest is more or less the same. The handling is like the carburetted model’s - stable and composed. Ditto the ride quality. The brakes felt a bit sharper on this bike, but there’s no specific reason for that, so we’ll put it down to a brake unit variation.

Here comes the killer part, though: the price. The Hero Honda Glamour FI is about Rs 6000 more expensive than the Glamour. As we’ve said before, we think the Super Splendor and the (carb) Glamour are mechanically identical, so in our eyes, the Glamour was already expensive. But forget that for a moment. The question is simple. Are you getting value for the extra Rs 6000? We’re divided on this count. In pure numbers terms, no. There isn’t that great a difference in performance or economy to justify an additional Rs 6000. In feel and experience terms, I’d have to say that this bike is actually quite good. Much better, in fact, than what I was expecting it to be. I’d say a Rs 3500-4000 increment I could have talked myself into paying. On the other hand, the increment would be invisible in EMI terms. And when you do put that money down, you get to own India’s first fuel injected motorcycle.

After waiting for almost half and hour for Joshua to turn up with fuel for me, I finally rolled off to the showroom to return the test bike. As I handed the bike keys over, the chap asked me if I’d liked the bike. ‘Oh yes, I did. I think it’s a huge improvement over the effective but bland Glamour.’ Then he asked if anything untoward had happened during the test (a standard question, almost). ‘Not at all!’ I told him.