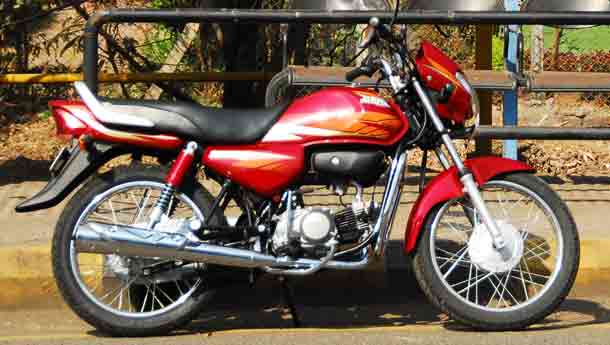 Oh no, not another all-new CD-series bike!’. The thought went screaming through my head, richocheted off the other side and promptly lodged itself firmly in the prefrontal cortex. I instantly went to sleep. When I woke, Joshua was telling me that it was indeed an all-new CD-Deluxe and Hero Honda meant it. It wasn’t a sticker-design party. Or rather, it wasn’t a party only for sticker-designers, but engineers got passes too
and ended up redesigning the mill from draftboard up.

What they have done is clothe the bike again in addition to the new engine. It has a sculpted new tank (a bit hard to spot the sculpture under the liberally bright stickering) and looks a lot more upmarket than the outgoing CD-Deluxe. On the move, the motor feels smoother than the last one and while the spec sheet claims a minor bump in the power, it’s one of those things that only machines can pick up on.

Ride quality happens to be quite decent and the easily operated two-stage preload is in principle a good idea (something that I cannot say for the ‘carry your own lock and secure the centre stand business’). I can’t, however, see our agrarian brothers adjusting this every time they are joined by a pillion.  Like the earlier CD-Deluxe, the handling is adequate and I daresay the new TVS tyres  feel more confident when thrown into a curve than the last ones. The front drum is a 130 mm job, and is up to it. Not the greatest front brake I’ve ever employed, but like the rest of the bike, adequate.

So, after this rather short test, what do I tell you? The new bike is better than the old one by a small margin. But it competes in a segment where the Platina/CT and the Star are currently raising hell. Will this be enough for Hero Honda to start regaining some numbers in there? I have a feeling about this.