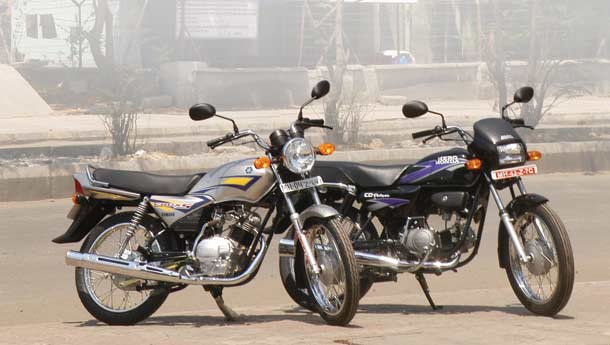 Oh, our bike market is so sexy. Something like fifty percent of our machines are completely naked. And the other half only dress in bikinis. While the conservative-minded enthusiasts have been hollering for more coverage, manufacturers, so far, have not obliged.


However, trust them to keep packing the ranks of the nude and the scantily-clad with ever more models. The latest duo come from Japan, one from the famous Yamaha family, the other from the even more famous Hero Honda family. Before this corny story line gets any more unwieldy, let me quickly give you the low down on both.

First in alphabetical order – and in sales – is the Hero Honda CD-Deluxe. Launched with one of the most unsightly, non-motorcycling ads of all time (roughly translated: when you can get deluxe everything  – examples shown ranged from skin creams to household appliances – why not a bike), the CD-Deluxe (Rs 39,102 on road Mumbai) is about Rs 3500 dearer than the CD-Dawn. It brings, lets see, new graphics and the matt/shiny combination fairing to the CD- line. Despite our questions, the three Hero Honda dealers we contacted could not spot any other differences. We did, however, spot the halogen bulb in the new clear-lens headlamp. The CD-Deluxe now is priced between the CD-Dawn and (basic) Splendor and should add to the already robust sales of the CD-Dawn.

On the other hand, Yamaha have launched the Crux S. Now, Yamaha have always had the Crux R to hold down the bikini-clad entry-level bike end. The S improves on the (what else) graphics. The S retains the sharp R tailpiece, and sports a new front fender. The engine has been tweaked, but don’t get your hopes up, the tuning isn’t for performance, but for emissions purposes. The Crux S (Rs 39,500, on-road Mumbai) is now available in silver. Which isn’t really a big deal, because the previous two variants were also available in silver. The Crux has always been a likeable, if slow-selling, machine and hopefully that last bit will now change.

Since both bikes have only changed their clothes (or to be exactly accurate, the embroidery on the very same clothes) we expect them to have identical performance. Which means adequate straight line performance, good fuel economy and decent levels of refinement.