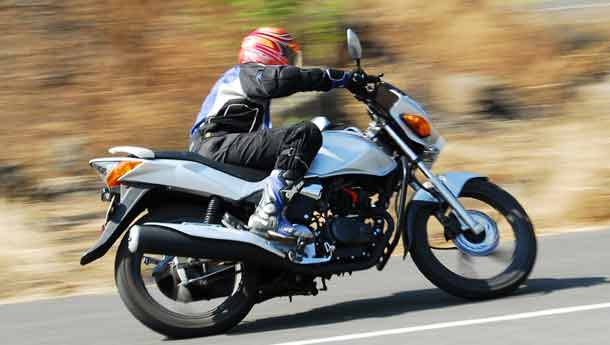 She's got the look?
In a word, no. The front fairing is all wrong and the relatively small headlamp, mumps indicators and too-large pilot lamp look like Arnie's nose on Pamela's mug. The rest of the bike is better, but still quite messy in design terms. I have grown to like the tail lamp though, but I still don't think extending the yellow band all the way across the large cluster was an inspirational idea. But it isn't the styling alone that irks us. For a Hero Honda, the CBZ-X is decidedly under par for build quality and fit-finish. Like the very fake plasto-aluminium meter backing plate, the unsightly welding on the swingarm (hidden partly by an under-articulated pillion peg subframe), similar welds on the exhaust and the missing engine kill switch. It also is rackety. Our brand new test CBZ-X came with a chronically loose right side panel, an audible numberplate and a clackety fairing. Unexpected from a Hero Honda, really. But get this. There is nothing more to crib about on the bike. Not one thing.

Mover and shaker?
Oh yes. To cliche the proceedings up a bit, it moves the rider and shakes up the competition. The re-tuned Unicorn motor has lost some of its class-leading refinement. It was a gentleman, it's now a dude. The engine is more audible, has more vibes and feels a lot more thrashy than the Honda. But, in return for those traits, you get abundant and unending power. The bottom- and mid- are so pumped up that I was scared I'd find a Unicorn-like weak top-end. Thankfully, I couldn't have been more wrong. Pin the throttle and the CBZ-X loves it. It responds with a 5.5 second burst to 60 kph (and feels like it's doing it in four clicks), creams the 100 kph mark with contempt and finally lets up at its 112 kph top speed. There's no weak spots, no let up, just a satisfyingly urgent rush forward. I love it. And while the engineers manage to isolate you from most of the vibes that come with 8000 rpm and beyond running, the bike does have parts that join in the fun and games, when they should be holding station in silence.

Slip the CBZ-X into traffic, and for the first few minutes it feels odd. The light throttle and the torque are borderline-overkill. It can hurry along with illegal urgency if you want to and this is a new feeling for a Hero/Honda product for me. Yes, including the Karizma. It also happens to turn quite a few heads, and I think its the noise/sound, not the looks.

Cornerstone?
This is the best handling package I've ever had the privilege of screaming around a corner on. Apart from BSM's unique procession of big bikes, that is. The Hero Honda (I'm tired of typing CBZ-X), as Joshua put it, 'practically corners itself.' It appears to receive inputs via telepathy rather than the handlebar, returns rich reams of feedback and is just superb. Without being unstable, the CBZ-X is miles quicker on the turn-in than the new Pulsar 150. And the feeling of the torque pummeling you out of corners is brilliant. Get off the bike, climb onto any other 150 on the market, and your heads says, 'There's something wrong with this.' This is a considerable achievement when you realise that each of the other 150s happens to be a confident, capable corner carver in its own right.

Ride quality is good too. The bike doesn't feel as supple as the Pulsar, but it has a Honda-familiar firm, well-damped feel. It easily absorbs the worst of the rough stuff, transmitting enough to constitute feedback. Overall, I'd say the Pulsar bests the CBZ-X on this front, but not by much. Braking is confidence inspiring as well. The only thing you could ask for, really, are much, much sportier OEM rubber – say Michelins, Bridgestones or Pirellis.

What would you change?
If I were Hero Honda, I'd start with eliminating that front fairing and replacing it with a naked headlamp or two. A Triumph Speed Triple style front end would be perfectly in character. And like I've said ad infinitum (and once more), I'd stop tweaking Ambition/Achiever panels, run over any leftover panels with the biggest JCB I could find and then draw up a new set. And while the current setup is great, maybe, just maybe, I think a monoshock will add more cool-ness to the bike. And more features – just take a look at the P150.

Money shot?
If I were in the market for a 150, I'd be riding the new Pulsar 150 DTSi (prettier, fast, frugal and slightly cheaper) and the new CBZ X-Treme (fast, exuberant, corner demon and also frugal) back to back to see which one suited me better. The machines are  both very good, and as different as chocolate ice cream and lemon souffle. I'd wager you'd be happy with either.

A lot was said about the X-treme after Shumi rode it in Delhi, and I just had to ride it to believe him. So I clocked about 140 km over the weekend before I handed the keys over to Shumi for the road test - the most aggressive 140 km in a long while. My initial reaction was that the motor wasn't as refined as my long term Achiever. But the much needed mid-range power (missing in the Achiever) had me enjoy the weekend traffic down NH8. The suspension on the X-treme was also set-up a tad stiffer, which had me pushing the motorcycle harder through the twisties but which also had my pillion cribbing all the way home.