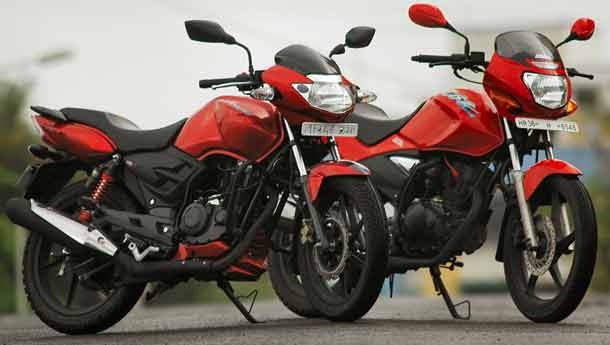 Joshua can scream, ‘cheater, cheater, cheater...’ for all its worth. It isn’t going to change one little thing. Fact remains that I mis-shifted from first to second, allowing his trailing CBZ X-Treme to catch and pass the TVS Apache RTR 160. It is undisputable also, that almost immediately the Apache went flying past the CBZ X-Treme.It then pulled out a gap of about six bike lengths by around 75-80 kph, and from there on, there was not a damn thing the CBZX could do about it. We were on a particularly appropriate piece of road, of course, one where the motorcycles could sit at full throttle and accumulate as much velocity as they liked. And so that’s just what the duo did. The Apache was always ahead, showing 123 kph on the digital speedo, while the CBZX’s older (heh heh) looking analogue meter finally came to rest at about 118 kph.

Joshua was probably muttering about the Apache’s displacement (and consequent performance) advantage, but hey, they’re roughly the same price aren’t they? When we swapped bikes, the exact same thing repeated. Young Josh is a bit lighter than me, and that only changed one thing – the Apache to CBZX gap was now even larger. Essentially, the Apache RTR is the fastest accelerating ‘150’ on the market right now, and every other bike in the segment will have a really tough time catching it in a straight line. Whether they will actually catch the flying TVS in a corner is another unlikely event, but more on that later.The Apache pulls off some amazing performance numbers. In soaking wet conditions, from a near cold start, the Apache showed off its bristling muscle power with a 4.58 second run to 60 kph. The CBZX, to put that in perspective, takes 5.57. And the Pulsar 220 DTS-Fi’s time for the same run is 4.39 seconds. Okay, wait, let me clarify that. In our Karizma vs 220 drag, the Pulsar’s might, we discovered, kicks in a bit later. So it isn’t really showing its full hand until a bit afterwards. Proof – the 220’s 100 kph time is 12.79 seconds. Here, the Apache loses with a full two second disadvantage, taking 14.79 seconds.It gets better.The test wasn’t completely fair. No, it isn’t what you’re thinking, it was the Apache that was at a disadvantage, since it was factory fresh with only 56 km on the odo. The CBZ X-Treme, on the other hand, had nearly 3,000 km on it. So, in time, we expect the gap between the two to grow further.Where the Hero Honda does have an edge is in the sensory personality of the motorcycle. The Hero Honda CBZX still impresses with a very tactile, if a bit noisy, feel. There are vibes, there is the sensation of big speed and of size and it all feels very flattering. The Apache is er... colder. It inhales the road with an altogether more straight-faced attitude, has almost no vibes, a near-perfect gearbox and a pronounced sense of not-that-well-hidden musculature. The Apache, weighing in at 136 kg, is also a bit lighter than the CBZ X-Treme (143 kg for the electric start version also), and it carries that weight rather well.

While not part of this drag race, there were a couple of corners on the way to the strip, once more the Apache immediately leaves a good impression. Compared to the CBZ X-Treme (which on its own, is a phenomenally quick-turning, extremely likeable handler), the Apache feels even more lithe. Steering inputs needed are delightfully light. Stability and confidence remain high despite the wet roads and overall, the Apache is a hearty guffaw, while the CBZX is a right laugh. But again, the TVS absolutely leaves the Hero Honda for dead on the brakes. The feel, the bite and the sheer amount of force it can bring to bear are awesome. TVS have, evidently, got this bike, very, very right.

Which leaves only the looks, build and finish to ponder, right? Well, the Apache is again, a fair bit ahead. It looks, compact and sporty, while the CBZX looks large, spacious and comfortable. The Apache is also quite pretty, which the CBZX definitely is not. As I’ve said before, the design in the details of the Apache make it stand out. We were doing this on a really dark, dreary day, so all the little bits don’t stand out and shine, but on a good sunny day, the Apache will probably make the CBZX look even more distant. More importantly, the Apache feels solid (although there was a mysterious plasticky rattle on the test bike), while the CBZX (and we’ve noted this before) isn’t the best built or finished Hero Honda we ever cast eyes on.

As Joshua put it, when we finally turned both bikes off for a call-that-a-day cup o’tea, ‘Arrey, there’s no doubt. I really like the way the CBZX feels. In fact, I think the Apache could do with a little more, you know, feeel. But in this test, there’s no confusion, the TVS is where the crown shall rest, men.’