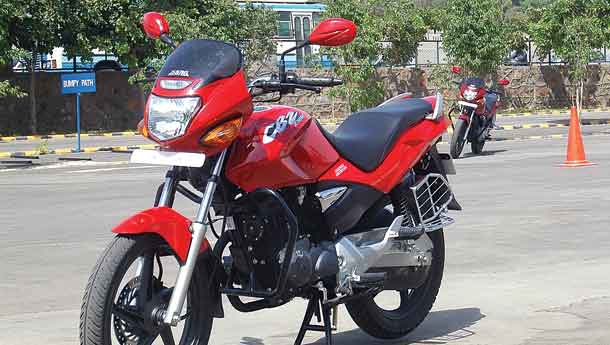 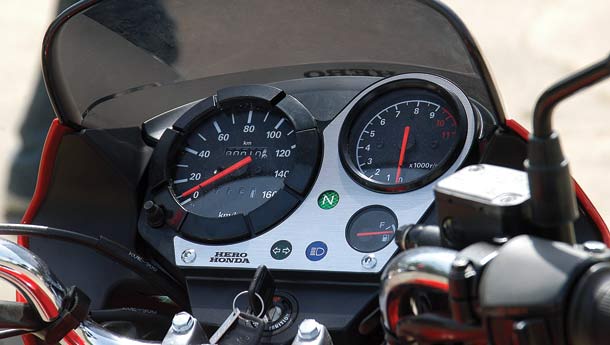 Punish me, for I am about to invoke the post-916, just-after-999 days, when aesthetes and motorcyclists alike ran amuck tearing their hair out, cursing a man named Terblanche and swooning from too much emotion. A huge landmark, perhaps the prettiest one of its sort, had just been replaced by what looked like a piece of ill-fitting industrial machinery. So what if it worked well, eh? The most melancholy, most soulful of motorcycle headlamps, ever, replaced by two featureless holes in the fairing.Then again, the 999 has sold well enough, although rumours now suggest the new 1200cc sportsbike is likely to have more 916 in it than 999.

In the CBZ X-Treme, Hero Honda had to face a similar challenge. From the time the tricolour bike was shown at the Auto Expo to the time when it finally breathed its last, the CBZ was an icon. Not only did it polarise opinion, it (re-) introduced us to what a bigger capacity commuter with sporty intent could be like. And now, like Sirius Black, the CBZ name is back.

We’ll start with the talking point, which is undoubtedly going to be the looks. Hero Honda (and by extension Honda) have finally got alloys on a 150, which should mean the beginning of the end of spoked wheels on their line-ups. Hey, one can hope, right? The CBZX (I’m not calling it X-Treme, thank you very much) gets 18-inch Karizma alloys in black as well as the same tyres. But while the blacked out bottom looks contemporary, the styling package is a bit like a shiny pink tux at a black tie event. The CBZX, unlike its predecessor, looks a bit awkward. That said, one thing you cannot escape is that the CBZX looks and feels substantial. The seat appears to be a cross-breed – like a motocrosser and a sportsbike seat had a clandestine, unprotected rendezvous in the garage. It’s sculpted, stepped and extends almost to the fuel filler cap. But looks aside, it felt firm and comfortable.

Leading from the rear are the LED tail lamps, which Hero Honda claims are an India first. Not. The Pulsar 180 was on sale first, fair and square. So, the CBZX is now the second motorcycle in the country to come with LED tail lamps. However, it has successfully beaten Bajaj to the split grab rail. We know that the DTS-Fi has a sleek set, but the CBZX had them on sale first. Congratulations to all appropriate parties, I think. Bijoy has been screaming himself hoarse about bikes needing non-metallic, bright colours on their brightwork. And finally, it seems people are waking up. The CBZX looks shattering in the flat, almost molten orange. Wonder how good it would have been had it been pretty.

The instrument console is a step forward too. The brushed metal finish looks classy. The large speedo, smaller tacho, fuel gauge and lights are a complete set and while everyone at BSM may not see eye to eye on the speedo surround (the block design), it’s clear, easy to read and complete. Among the other details, I love the dinky new brake pedal. It has a little toe guard for my big toe and a smart, all-chrome tab to press down on.   Suspicious of Hero Honda’s penchant for transplating and restickering body panels, I invoked my investigative journalism skills. ‘Can I fit this tank on the Karizma? I think it’d look smashing!’ My answer was a lunch table full of giggles. ‘We’re not that dumb.’ I was then informed that the panels on the bike were all new, although I did detect the underlying swoop of the Karizma in the sidepanel and tailpiece.

But fortunately, I discovered that my apprehension on the styling front is evened out by the rest of the package. The blacked-out motor (black is the new purple?) looks very much like the Unicorn’s and externally only a couple of the covers have different detailing. But in the process, the CBZX does not have an engine kill switch. Which, no matter what they say, is a retrograde step.

Like the Unicorn, the 149.2cc engine’s bottom and middle bulge like a gravity-afflicted gourmet’s belly. Which, for the motorcycle at least, is a great thing.  But once revs rise, I thought the top-end rush was good, but not on par with the CBZX’s pulsing grunt. And while the Unicorn shares these traits, the CBZX felt significantly more powerful. Which is how it should be. While Hero Honda have not tweaked the Achiever-spec motor in basic configuration (bore, stroke, compression are identical), power rises to 14.2 bhp (first 150 to make more than 14 bhp, then), and the peak power point rises 500 rpm to 8500. And while the Achiever’s torque peak continues,  it also appears 1500 rpm later, at 6500. But, while all this was going on, the CBZX has also gained roughly six kg over the competition. Not that you’d notice it – open the throttle from idle, in as high as third gear, and the CBZX leaps forward like someone poked it in the hind with a fairly pointed stick. This also means easy wheelies, easy overtakes and low-rev, high-economy commuting.

Surprisingly, all the three bikes at the launch had spongy disc brakes. I’m sure it won’t be the case with the on-sale models, but I did nearly crash into the gate of the Hero Honda Safety Education Centre the first time out. If I had, would I have gatecrashed the CBZ X-Treme preview ride? More to the point, the discs are the usual 240mm jobs that all our bikes seem to have, so there isn’t any specific reason for the sponginess.
The space at the launch site was not enough to take a good look at the motorcycle’s handling. But it felt maneuverable and quick to turn. I also had no opportunity to see what the ride quality was like, but again, I found no obvious loophole on either front, so I’m now waiting for the road test bike to come to us.

Okay, so maybe I’ve poked more fun than necessary in the article. My apologies. The bike’s quite nice once you get past the styling. It’s just that the visuals aren’t come-hither, something all of us were expecting thanks to the CBZ badge. That apart, you have a very competent, torquey motorcycle, built well, with a good brand name on the cover. Without a doubt, it’ll be among the quickest to 60 kph, it’ll be frugal and in the resale market, it will hold its value. At Rs 56,500 ex-Delhi, the CBZX is one grand more expensive than the Pulsar 150. Which means that going into the road test, we’re going to find out if the CBZX can directly challenge the market leader. Styling apart at first glance, it certainly has the goods.