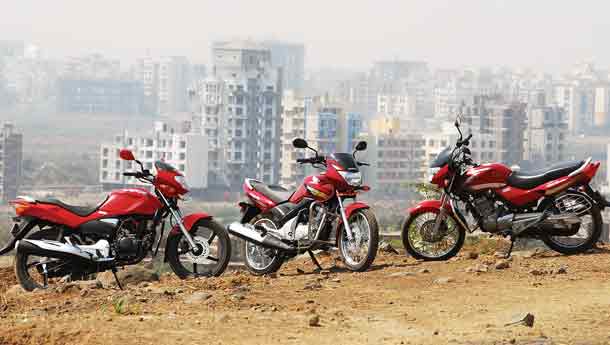 A platform means many things to many people. In a slightly idealist-romantic sense, it’s a place where journeys begin. It’s also a place from where people expound their views and in our context it’s a cheap way to build lots of different products. And today, we’re going to explore three bikes that have the same basic components, but that are very different in feel, appeal, performance and price. What makes this even more interesting is that all three are contemporaries. The Achiever-CBZ X-Treme overlap may be tiny, but it is there. And the Unicorn’s still around.

Okay, cut the BS, we’re doing this test because Joshua insists that the Hero Honda Achiever, his long term fleet favourite, is superior to the Honda Unicorn and our Bike Of The Year, the Hero Honda CBZX X-Treme. And because I don’t agree.The Unicorn, chronologically, is the first of the three bikes. It’s quiet, civil, handles quite nicely, rides a bit stiff but above all, offends no one. Which, we believe, was its brief. It did most things well, re-introduced monoshocks to our market and in sales terms, has been a steady seller, but not a hit.The Hero Honda Achiever, which followed it, has been even less of a hit, but that’s really unfortunate. We all believe that it is one of the best overall motorcycles in the country today and the poor reception it got was not only undeserved, it was a crying shame.But there were clear reasons why. The umpteenth re-application of the Ambition panels was never going to cut it. And the omission of alloy wheels from the package sounded just like church bells at a funeral – ominous.

Then came the CBZX. It took the Achiever’s excellence forward, gained more power, had fresher panels (unfortunately with ungainly, muddled styling), the requisite alloy wheels, presence and an out-of-scale extrovert of an engine. It traded in some of the platform’s trademark refinement in the bargain, but I for one am not complaining. Others, for the record, are.To explore the minutiae of differences in the bikes, the engines on all three are almost exactly identical. The difference is that the Achiever’s motor was tuned for a tiny bit more power than the Unicorn. Peak power was raised by 0.1 bhp and 0.05 kgm, which are tiny figures, really. But with that came a substantial reduction in the wheelbase (down 50mm from 1340), smaller overall dimensions, twin shocks and a 1 kg drop in weight. This makes the Achiever feel a lot more tactile and responsive than the Unicorn. Then, for the CBZX, the engine received a fairly comprehensive boost in power, raising the output by more than half a horse, along with a boost in torque. Both power and torque peak moved northward in the process. The wheelbase, once more, grew from 1290 mm to 1325 mm. And the CBZX is the heaviest as well, weighing in at 1 kg more than the Unicorn.

On the road, the Achiever is the bomb. It explodes in the face of both the other bikes, creaming them in performance terms. At least it feels like that. To the stopwatch they’re all pretty close. In fact, on almost fronts, except desirability, the Achiever has the measure of both the machines. I remember being surprisingly enamoured of the bike when we tested it, and those are the kind of feelings that come flooding back whenever any of us takes the Achiever out for a spin.

The Unicorn, in comparison, feels a bit too civil for its own good. It’s a solid 150,
all right, just not alive enough. After the tactile feast that is the Achiever, it feels rather staid. Thankfully, we’re hearing rumours of a sportier Unicorn upgrade being in the pipeline.

The CBZ-Xtreme is another creature altogether. Abundant, almost too-much torque is its hallmark. And it’s easy to explain. Not only does it have more torque, lower gearing helps the sensation along. The extra power is also enough to get you an altogether more substantial top end feel. The CBZX feels like it is bursting with power. The engine note is tauter, as the gearing allows the engine to spin harder and for a Hero Honda, it has vibrations, some harshness and is a throaty bike.
In corners, the trio are very similar, but the CBZX is spot on. The Achiever carves ‘em up hard too. The spoked wheels, which are actually a tiny bit lighter than the CBZX’s Karizma – derived alloys might explain the slightly superior ride quality of the Achiever as well. The Unicorn, once more, is what would get labelled a tourer if this test were about sportsbikes.

Overall, the Achiever-CBZX toss-up is pretty close. The Achiever wins easily on feel, ride quality and Joshua. The CBZX, on the other hand, is the handler, though not by much. Performance is close. Especially if you have a spanking new CBZX, and a well bedded-in Achiever (Not fair! I killed
Nandu-CBZX with the Achiever – Joshua).

Point is, the platform has given us three really nice bikes, with nice variations in character. We’re hoping for the Unicorn upgrade to take it to the next step. We’re inducting the Hero Honda CBZX into our long term fleet. And unfortunately for Joshua, the beloved Achiever is being returned to Hero Honda, heh heh.