Despite a better-than-expected show in the December quarter, the Ashok Leyland stock has shed over 3.5 per cent since then, and lost a quarter of its value since December. The Street is worried that the high level of discounts, a weak freight market, and costlier funding could impact volumes for the truck maker.

While the firm outperformed the sector in January by recording 13 per cent year-on-year growth in volumes on a low base, higher volume of buses and a build-up in inventory at the dealer level, overall demand still remains weak. Analysts at Emkay Research believe there has been a trend reversal in the M&HCV segment due to factors such as deferment of purchases during the election period, surplus capacity with fleet operators, and a higher cost of ownership.


Volume performance is expected to remain subdued over the next few months until the general elections are over. While the company is expected to end the year with flat sales in the March quarter, it is eyeing a growth of 20 per cent in FY20, aided by pre-buying ahead of implementation of the BS-VI auto emission norms.


In addition to volume worries in the near term, margins could come under pressure, given record discounts and deteriorating product mix.

Given the aggression shown by Tata Motors, discounts that have increased 5 per cent sequentially in the December quarter are now pegged at 10-12 per cent of vehicle prices. The other obstacle is the new axle load norms that have led to the shift towards lower tonnage vehicles, impacting realisations and margins.


In addition to domestic sales, the firm’s other segments, too, are expected to come under pressure.


Export volumes could be impacted given the political uncertainty in Sri Lanka and delays in project orders in Africa. Analysts at ICICI Securities believe that even in the defence segment, visibility for Ashok Leyland on defence tenders converting to orders in the near term remains low.


While the stock has corrected sharply over the last year, due to cut in earnings by 15 per cent for the next year and a muted volume and margin picture, investors are better off avoiding Ashok Leyland for now. 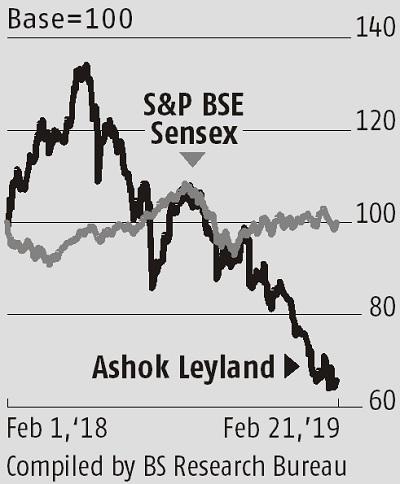