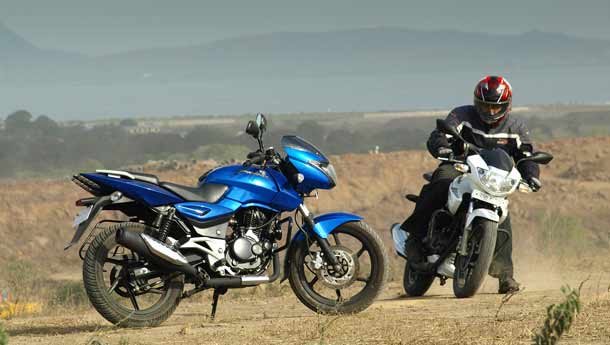 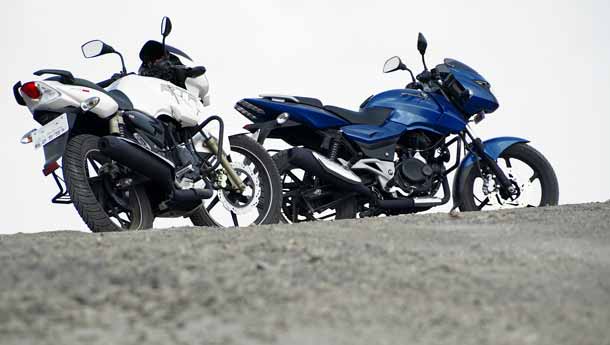 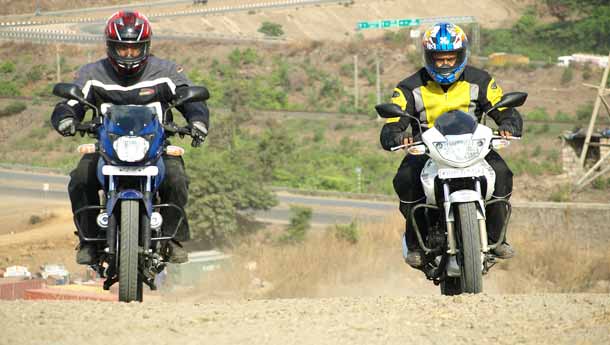 Count your blessings. The reason I say this is because these are days that are certainly looking good.

Why? Because unlike not too long ago, there is competition in the higher displacement motorcycle segment. And it's a fierce one at that. The Pulsar 180 DTS-I has a new avatar and there's new contender forthe 180cc crown - the Apache RTR 180. Both now have the look and engines that seem the part. It was only natural that we see who decimates whom and wheelies out with the title 'Best 180cc motorcycle' in the country.
With all of that said, and with the opponents all fueled up and raring to go, we shall get into the ring. To my left is the brawny Pulsar 180 and to my right is the shimmering white Apache RTR 180.

TING TING! ROUND 1 - ENGINE AND PERFORMANCE
Okay, so this is going to be a very close bout. The Bajaj motor displaces 178.6cc and puts out 16.8 bhp with 1.6 kgm of torque, while the Apache's 177.4cc motor delivers 17 bhp with an identical 1.6 kgm of lugging might. Although these numbers may seem like photocopies of each other, the temperaments of the two engines are worlds apart. The Pulsar's single cylinder wonder pulls across a very wide powerband and manages to lug its 147 kg kerb weight, plus me on it, to a top whack of 120 kph. On the other hand, the Apache's mill is eerily (I like, really!) two-stroke with its antics. It's wild low down, mellows down mid-way and then wants to retire at the redline, all within a very narrow powerband. Although a blocked air vent on the petrol tank lid kept killing the engine when pushed hard, I managed to whip it to about 117 kph, in spite of it being about 10 kg lighter than the Pulsar.

The mannerisms of the Pulsar engine would make it an enjoyable motorcycle for the highway and city alike. There's power there when you want it and overtaking will seldom need any downshifting. Conversely, the Apache is a purely city slicker-engined motorcycle through and through, and pointing it towards the highway is like  throwing Al Pacino in a Telly Tubby episode. It's grunty, peaky and will shoot off as soon as the red light turns green, and you'll in all probability be the first off the line by far. The Apache feels much, much quicker than the Pulsar from 0 to 60 kph and it pretty darn well is - 4.5 seconds.

An engine is nothing without a competent gearbox and in this department, the Pulsar has to cede to the Apache. The Bajaj's gearbox has the feel of an arthritic knee, and finding neutral is worthy of being included as one of the twelve tasks of Asterix. The cogs of the TVS are smoother shifting and quite precise, with a positive shift every time you use the lever.

Now, this is a tie, really. That being because the DTS-I looks like the older Pulsar 200 and the Apache 180 looks identical to its older yet smaller sibling, the 160 FI. So there isn't nothing new here in the looks department, apart from new stickers, brushed gold coloured tidbits, a butch looking detachable tail for the RTR and a pair of clip-on bars, tank extensions, split seat (all of which have been borrowed from the P200) and an all new chiseled 3-D tank logo for the Pulsar 180.

I personally like the look of the Pulsar 180 more because to me, it's lines are a lot more balanced and everything fits in. The tank extensions have added an angular stance to the otherwise rotund DTS-I tank and that makes it blend in with the knife sharp tail section. The Apache 180's colours are brilliant and the RTR decal slashed across the fuel tank makes everybody notice what's passing by, but the fairing somehow never went well with the rest of the bike, even on the older Apache. Well, that's a point to the Pulsar, then.

ROUND 3 - HANDLING AND BRAKING
Before the two have a go at each other, I'd like to raise a question. Would it be fair to throw in a kick-boxer to fight it out against a hungry pitbull and then expect to sell out all the tickets for the show that is to ensue? I don't know whether that's ethical sportsmanship, but I'm bloody sure that it's going to be great for business - there will be plenty of people who would want in on the gore.

That's exactly the case here, with the P180 and the RTR. The DTS-I is the more sorted handler of the two and it's almost analytical with the way it attacks corners. The Pulsar is armed with handling that won't catch you off guard and it instills oodles of confidence within you to try pushing harder around the next set of twisties. The Apache, meanwhile, will slingshot you into a curve, and make you exit with a broad, weird grin stuck onto a very pale face, and some very wet pants. It's wild, almost bucking, all of this despite a slightly longer wheelbase than the RTR 160 - which makes it a blast to ride. On the flip side, it's a handful if you don't know what to expect. Er, actually, you shouldn't expect anything because it's got a will of its own. That very animal-like handling makes the Apache a brilliant traffic filter and swinging in and out between waddling cars couldn't be more fun.

ROUND 4 - BRAKING
The Pulsar is armed with a 240 mm disc up front and a 130 mm drum at the rear. The Apache boasts of a massive 270 mm disc below the headlight and is trailed by a large 200 mm disc at the back. Although the Bajaj does have the stickier and wider rubber (90/90 and 120/80 versus 90/90 and 110/80 of the Apache at the bow and stern respectively), it's the RTR that wins this round with a deadly left hook. Knockout!

BAJAJ PULSAR 180:    3   stars
TVS APACHE RTR 180:  4.5 stars   ROUND 5 - RIDE QUALITY
I decided that this last showdown between the two has to be a dirty one. And with that in mind, Kartik and myself thought it was time to take the bikes off road. The way the two bikes behaved in the gravel and the dust made the differences glaringly apparent. Bajaj's heavier and longer wheelbased Pulsar seemed planted and the shocks took everything that was thrown at them. Riding over ruts and stones on the Pulsar didn't shake it one bit. With 10 kg less bulk than the Bajaj and its shorter wheelbase (by about 20 mm), the Apache rode like a headless chicken - this way and that. The bumps felt harsher on the TVS, which makes it known that the Apache loves its tarmac firm and blemish free. This motorcycle's suspension is set up up to make it an all-conquering asphalt burner, but off the superslab, it fights like the French.

AND THE WINNER IS ....
The Bajaj Pulsar 180. Yes, the Pulsar still retains the 180cc champion's belt, but by a whisker. The Apache 180 has been too worthy an opponent for the Pulsar's own good and too fierce for the Bajaj to take lightly. The Pulsar 180 needs to evolve into something else, as it seems like its development has gone nearly as far as it could, or should. There is a need for it to be a whole new motorcycle and for it create an entirely new bloodline.

Although the Apache is much more fun to ride than the Pulsar, not to mention that it demands more involvement from the rider, it does tend to exhaust its box of tricks somewhat quickly. But there's no way you will regret plonking your money on for the TVS, because it's a pretty good motorcycle and there's the whole exclusivity thing - there aren't as many RTR's on the road as there are Pulsars.

Speaking of the green bucks, the DTS-I will cost you around
Rs 64,800, while the RTR 180 is priced at about Rs 64,900, both being ex-showroom figures in Mumbai. The 100 bucks extra for the Apache will get you a show-stopping rear disc brake, which is money well spent, really!

For now, I am a happy man. Why? Well, its about bloody time that we saw action in the larger displacement segment and being the optimist that I am, I shall wait and watch intently to catch the jostle for the crown of the best 600cc motorcycle in the country. I must admit that I would love that much more, but this one time, I'm being  realistic as well!