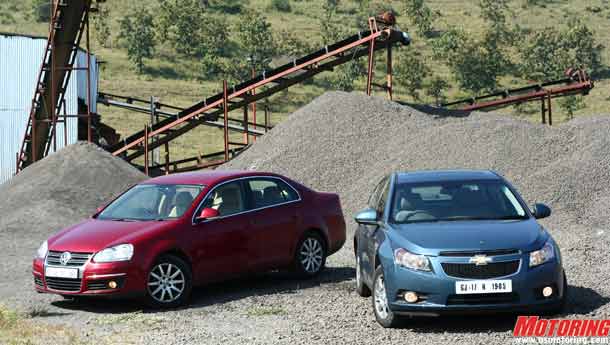 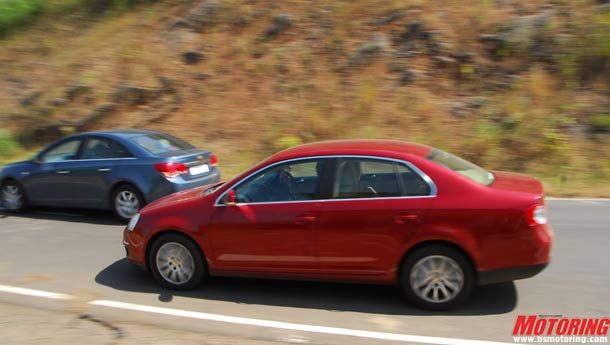 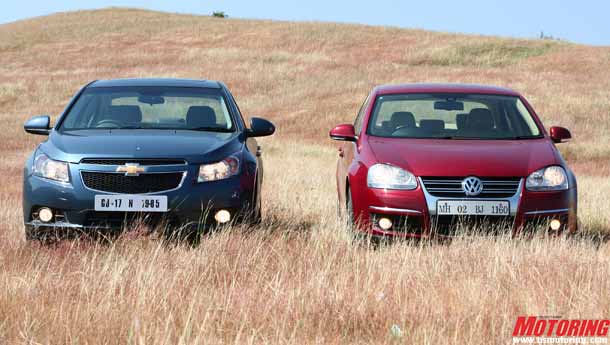 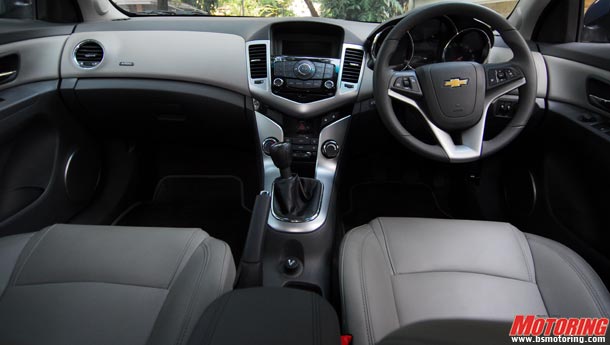 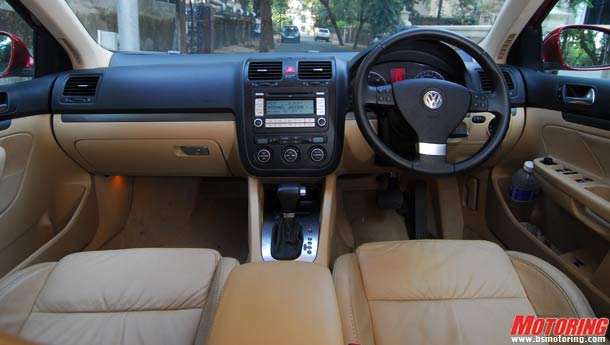 Executive class sedans have multiple roles to play and they need to be good in everything – looks, performance, ride and handling, trim levels, fuel efficiency and of course value for money. And when they run on the oily stuff, there are further demands on them – they have to be torquey and powerful, smooth and refined and yet give gazillion kilometres to the litre. The Volkswagen Jetta is that way an accomplished piece of kit. It does everything you’d expect from it quite well. But you know, competition in always good – so while there are people who save up by opting for the Skoda Laura, others have a choice now, with the new Chevrolet Cruze. Here then, are the answers to all your questions.

Frankly, when it comes to appearance, there is no doubt which is the better looking car of the two. Unless of course you are a retired gent living in a little European town where the local council fines you if your lawn grass is the wrong shade of green. Yes, the Jetta has that mind-numbing seriousness about it that if it had a profession, it would be a boring chemistry teacher. That red shade actually seems a little out of character! On the other hand, though the Cruze is not classy, there’s something about it that is 1. Youthful 2. Brutish 3. Handsome 4. Copied. Yup. The tail-lamps look as if they have been yanked out of the Honda Civic, while the high waistline, though muscular, seems to have been ‘inspired’ by the BMW 5 Series. Though such details may not be original, in true American style, all of the elements come together to make the Chevy stand apart from the rest of the cars on our roads. It’s a good-looking car.
Volkswagen Jetta: 3 out of 5 stars
Chevrolet Cruze: 4 out of 5 stars   Inside insight
German conservatism vs subtle Americana

The dashboard layout and the quality of materials used in the Jetta can be replicated in other cars from the VW stable – that is its strength as well as weakness. As humdrum it is on the outside, the same treatment goes on the inside as well. Though it’s all ergonomic, extremely thoughtful and well put together, the Jetta’s insides are as exciting as, er, meeting your chemistry teacher. The Cruze’s interiors are refreshing. The dash layout is unique, yet it is clutter-free and simple. The quality of plastics and switchgear is also quite impressive. The blue-lit dials, the information display, the start/stop button and numerous other little touches come together to impress you. Okay maybe the novelty value may eventually wear off, but it’s nice to see that GM is trying to be different and offer something new rather than ape other carmakers.
Volkswagen Jetta: 3 out of 5 stars
Chevrolet Cruze: 4 out of 5 stars

There is no challenge here. The Cruze’s 1991cc four-cylinder turbodiesel simply outguns the Jetta – the German car is left struggling to catch up with the Chevy. The 148 bhp/33 kgm motor may drink diesel, but in spirit, it is like an all-American V8 with an endless capacity to munch the miles. Like a V8, when you stomp on the pedal, the Cruze rushes towards the horizon, only it feels a bit more in control. It is an engine that allows you to hang around 160 and 180 kph all day, provided of course you get those kinds of roads. Its ability to consume the kilometres rapidly without getting fatigued is the Cruze’s strongest point. If I were to take an affordable car to do one of those pointless record-breaking GQ drives, it would be this. The engine may seem a bit noisy and the gearing may not allow for smooth shifts in stop-and-go traffic, but I’m just being bitchy. The Jetta’s 1896cc power unit is actually good in its own way. It’s pretty refined, relaxed and capable, and the only thing going against it is that it does not pull you towards the horizon like the way the Chevy VCDI does. Yup, the engine’s performance goes well with the conservative appearance of the car inside-out. The DSG tranny is marvellous of course and does a good job of transferring the power to the front wheels. It is intuitive, plus you have the option of using the paddles. The Cruze deserves an automatic gearbox as the manual five-speeder is not geared well for city driving. Plus you need to have a heavy left foot to engage the clutch pedal and really need to slip it to drive smoothly at low rpm. So it’s highly recommended to wait for the automatic tranny in the Cruze.
Volkswagen Jetta: 3 out of 5
Chevrolet Cruze: 4 out of 5   Dynamic decisions
Corner carver vs straight forward

So far, the Cruze has been winning over the Jetta. How is it when it comes to ride and handling? Finally, the Jetta takes revenge, and that too, comprehensively. The Cruze is marvellous in a straight line, but push it towards a corner and its tendency to understeer takes away all the joy. Which is surprising to me, because I thought the Cruze platform – which the Opel Astra also shares – would have been nimble, but it’s not so. I think the reason for that is the Cruze is more tuned to offer a good ride quality in keeping with the Chevrolet badge rather than for straightening corners. The net effect is that you get a car with an uninvolving chassis. Making matters worse here is the steering, which is completely devoid of feel. Even on a straight line, at high speeds, the steering simply does not wind up or provide any sort of feedback. The car’s dynamics setup is perfect for a weekend driving owner who sits at the back during the week – a pity actually, considering the performance on tap. The Jetta of course is quietly competent. The steering, the ride as well as the handling of the car all come well together. It’s the strength of the VW underpinnings that the car handles neutrally, irons out potholes and gives enough feedback through the steering. But that does not mean the Jetta is a perfect driver’s car – it’s just that in comparison to the Cruze, it’s much better when it comes to driving dynamics.
Volkswagen Jetta: 4 out of 5
Chevrolet Cruze: 3 out of 5

Throughout our testing cycle – which involved crawling in the city to trying to touch Mach One (!), both cars just sipped diesel. Their fuel consumption habits will delight any resident of this great country. Despite our spirited acceleration runs, who-dares-wins highway adventures and bumper-to-bumper grinds, the Jetta gave 13 km to the litre, while the Chevy managed 12.7 kpl. With that kind of performance from the Cruze, the 0.3 kpl difference is irrelevant.

Volkswagen Jetta: 4 out of 5
Chevrolet Cruze: 4 out of 5   Judgement dread
Premium European or VFM American

I don’t know why the reference to America constantly, as the Cruze is not exactly that. It’s a world car from GM, and the Yankees are getting it only next year. Anyway, that’s beside the point. It’s got everything going for it and except for its wallowy handling, the Cruze has single-handedly won across all parameters. Okay, the Cruze feels like a grown-up Optra while the Jetta feels like downsized Passat. Though the VW comes through as the more competent, sorted-out car, one simply cannot ignore the bang you get for the buck. The Cruze is killer value for money, and even if GM introduces it later with an automatic gearbox, it still will be compelling value compared to the Jetta. And the verdict is also that: please wait for the automatic Cruze, which will iron out a few of the niggles.