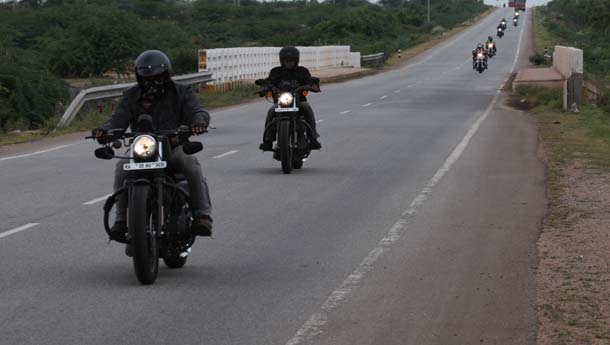 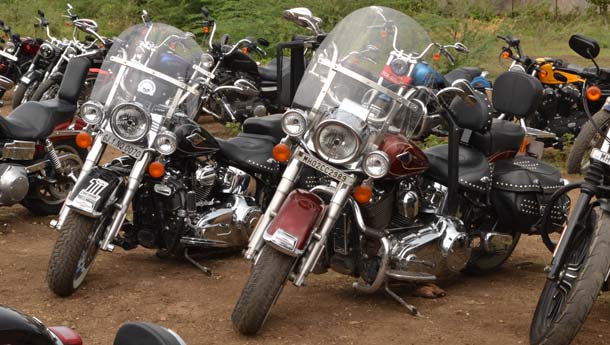 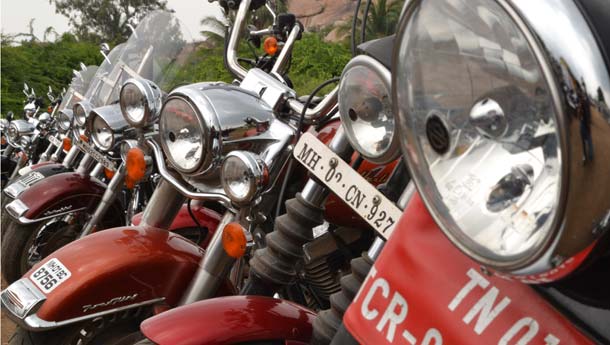 As the mercury hung around persistently above 40 degrees, the sweat inside my ventilated jacket providing a cooling effect as I potato-potato-ed past 80 kmph, I started to realise what Harley-Davidson is all about. Not just one specific motorcycle, but the entire family. Everything on the motorcycle vibrates, whether you’re on the gas or off it — the engine, the handlebars and the mirrors, even. I suppose it’s actually a good thing, so you’re not numbed by the monotony of riding long distance. With another 150 km to go, 200 km already behind us, I was convincingly motivated to complete the leg to Hampi, roughly 350 km away from Bangalore, on the very same motorcycle I’d been riding all day long. It wasn’t the comfiest, the Street Bob Custom, but the throbbing V-twin had enough meat to momentarily erase all thoughts of discomfort as and when you asked for it.

Despite being a bit sleep-deprived, I was fresh and eager to ride longer. As per our progress rate, we were to reach our destination around noon, but had we decided to do a long detour and stretch the ride to the sunset hour, I would have been just as happy. Perhaps that’s what riding with 200 other Harley owners does to your motorcycling psyche. With so many enthusiastic bikers around, my mind was automatically off my culinary fantasies. I was riding with the Harley Owners Group, the occasion being the 2012 Southern HOG Ride, and apart from over a hundred Harley owners from Bangalore and Chennai, chapters (groups, in motorcycle-club lingo) from Mumbai, Ahmedabad and Kolkata, too, had joined in. One particularly enthusiastic gentleman, Sharad Sharma, rode down on his XR1200X all the way from New Delhi, without any back-up vehicle! Talk about seriously enthusiastic motorcyclists!

You would imagine that a 200-motorcycle convoy would be quite chaotic especially given the state of our roads and the universal lack of road discipline right? Well, somehow, it turned out to be quite unlike that. Four major groups split into further small divisions and with plenty of stops for food, drink and fuel (the smaller Harleys have 8-litre fuel tanks, good for about 150 km or so), half a day’s riding in the baking sun wasn’t as taxing as it can typically be. Both the Harleys and their owners are to thank for this. Long-distance riding is all about conserving energy and since Harleys aren’t point-and-squirt machines, doing so comes quite naturally. It took me a little while to adapt to not using all the power all the time, but once settled into the rhythm, it’s one of the most comfortable, fulfilling places to be on this planet. It’s all about the momentum.

Harleys are not the quickest, fastest motorcycles around and even within the family, the diversity in performance is very evident. A basic 883 (the cheapest of the lot) has one-third of the performance of a full-dresser Electra Glide, but here’s where the family values kick in. Owners of the bigger, faster Harleys don’t simply zoom off into the horizon, enjoying large lumps of power. Instead, they slow down, take it easy, help the slower riders overtake safely, and adopt riding techniques that make riding long-distance as stress-free as can be possible, while making sure everyone’s having a good time. That’s what you do on a Harley — ride a lot, make friends, and enjoy yourself.

I could have done the trip much quicker on a faster motorcycle, but would it have been as much fun? Maybe. But that would have been largely a self-centred mission in which I would have broken a few time-distance-speed records. Here, I pegged my feet up on the wide foot-pegs, rode as long as I liked, had two very beautiful evenings filled with music, grub and banter, and made more friends in one weekend than I have made in a few years. What brings about this camaraderie? Does this bond develop on the sole basis of a common material possession? No, it takes a little more than that. When you ride together on similar motorcycles, not just caring for your own safety but for that of everyone else queued up behind you, handing out thumbs-ups liberally while still staying true to your own riding style, there is no sense of encroachment from the riders around you, be it 20 or 2,000.

The motorcycle-rider relationship is very beautiful. Both, man and machine, are inter-dependent and neither is going to go anywhere without the other. Man can flag down a bus to get somewhere, but how much fun is that? A very interesting aspect of this relationship is how the two entities work around the concepts of flexibility and rigidity. The motorcycle may be rigid, due to the nature of its componentry or sheer mass (a full-size cruiser, for example) and a rider’s rigidity may come from lack of skill, developed fear, or — no offence — sheer mass. And it is how one adapts to the other’s lack of flexibility, apart from the joy of speed and travel and the sights, sounds and smells, that makes motorcycling so intensely personal and passion-invoking. And with a Harley-Davidson between your legs, arms wide open, your connection with motorcycling will remain at its truest. I’ve only just begun saving up for one! The writer was invited by Harley-Davidson to participate in the 2012 Southern HOG ride.