Harley-Davidson's Breakout is a great bike for weekend getaways 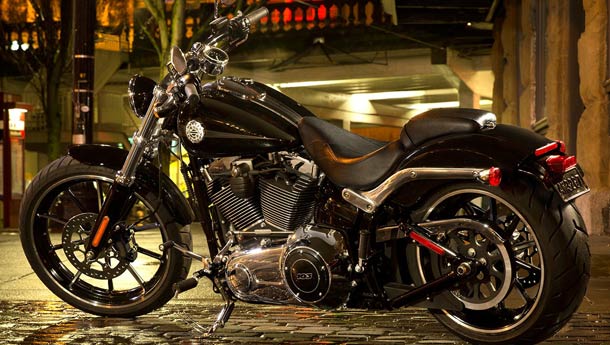 I could not quite put my finger on what wasn't right with Harley-Davidson's latest motorcycle, the Breakout, when I first saw it. I must confess my first impression of the motorcycle was that it wasn't something to rave about; the "hard candy quicksilver" look reminded me of bridesmaids in shimmering silver outfits. But, of course, credit must be given to the gutsy women who wear this outlandish colour and yet carry it off ably, adding brightness to the nuptial celebrations at the same time. And like them, the Breakout, with all its muscular profile, slowly divests you of your incredulity and begins to grow on you.

The only way to get over the dazzling aura of the Breakout is to simply sit on the saddle, start the engine and ride the silver steed away. To my surprise, I found the seating position quite low; it is merely 660 mm from the ground, though it provides ample back support. The seat squab is a snug fit and ensures the ride, be it short or long, is a comfortable one. The pillion seat is quite hard, and as it is slightly elevated it is not the happiest place to be on.

I turned the throttle and found that the exhaust note was more on the subdued side, which is disappointing because this just doesn't go with the Breakout's macho image. If you want your presence to be felt and want to overawe friends and pretty strangers, your only option is to invest on a Screaming Eagle exhaust.

This low-slung cruiser is an enigma when it comes to design because it unifies fat styling with agile handling. It has a 21-inch, 130 mm front wheel and a massive 240-mm wide, 18 incher at the rear. Based on the Gasser drag bikes of the 1950s and'60s, the Breakout has short retro fenders, straight handle bars that are turned slightly in towards the rider and a stretched riding stance. Its minimalistic design beautifully complements the chrome strip running on the fuel tank. The bling continues across to the engine cover and the thick front forks.

Obviously, the Harley-Davidson engineers have worked overtime on the chassis as the Breakout was more than willing to take whatever was thrown in its path. But due to its limited ground clearance I found that it couldn't take a free flow turn on hairpin bends without a scraping sound emanating from the tarmac like an off-tune song. It is quite unfortunate because the Breakout is capable of a lot more if not for its foot pegs playing spoilsport. The rear wheel provides a lot of grip to complement the chassis, and this makes it all the more frustrating that the bike is handicapped and cannot achieve its full potential. Taking a U-turn is a nightmare as the Breakout needs a lot of space to accommodate its long turning radius. Keep in mind while taking a turn that the bike starts leaning its weight on you. Minus the offending foot pegs, the bike is a confident handler on sweeping corners, though cutting speedily across through the traffic is not possible. Also beware tall speedbreakers.

Contrary to popular belief, Harley-Davidson bikes aren't as laidback as they are presumed to be and have a lazy pick up, especially the Twin Cam 103B engine. The Breakout's 1690 cc engine has a crisp response and strong pulling power in low ranges, and cruises at anything between 30 kmph and 100 kmph without much fuss. The powerplant easily adapted to the slow start-stop traffic and I did not even once notice a lag. It is a very flexible engine and you can ride it according to the terrain and traffic. It was much at ease on inclines as the lowend torque kept it going without engine knock.

Unfortunately, the six-speed gear provides anything but a smooth transmission. Changing gears means literally having to step on the shift lever and waiting for a loud thud. Harley-Davidson seriously needs to up its refinement level because in this respect it lags behind its rivals. Another sore point is that once the speedometer's needle crosses 80 kmph, you start to feel the vibrations and it becomes more evident once you go past the three-digit mark.

Riding on straight flat tarmac is where the Breakout excels. My advice to you is to avoid broken roads because it will then take a toll on your body. The bike will crash into potholes and ditches and make your spine scream for mercy. If you are riding at a speed of 50-60 kmph, you may not feel the rude thud as much, but at low speeds the ride is unforgiving.

The Breakout is a typical cruiser that is meant more for American roads than India's narrow, chaotic ones with countless turns. Though it might not be as imposing as other Harley-Davidsons, it still looks macho and guarantees you a lot of attention with its short fender and a wide, fat rear tyre. Yes, I did get over the silver colour but a lot had to do with passersby giving me the thumbs up and complimenting me on my aesthetics. The engine is a gem and can cruise even at low speeds, which makes it easy to ride in the city. The biggest challenge with this bike is its limited manoeuvrability and its virtual inability to take tight corners. The Breakout is great for a weekend getaway, but given a choice I would plump for the more practical Fatboy.