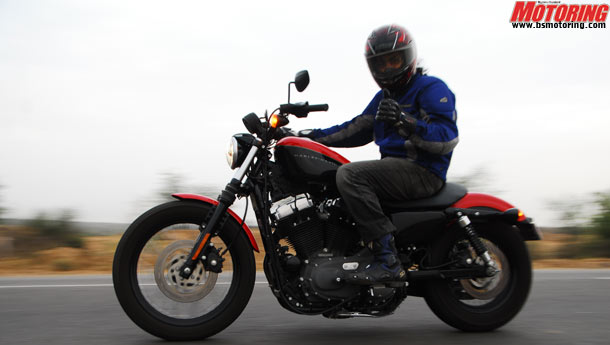 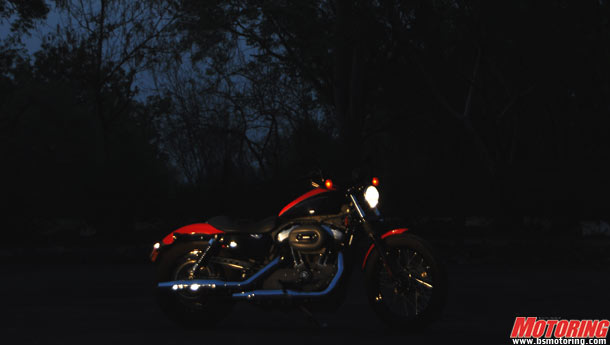 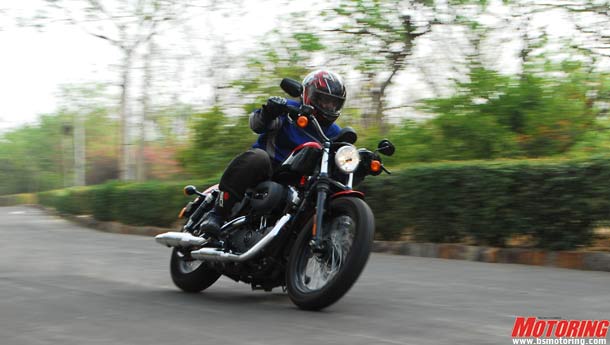 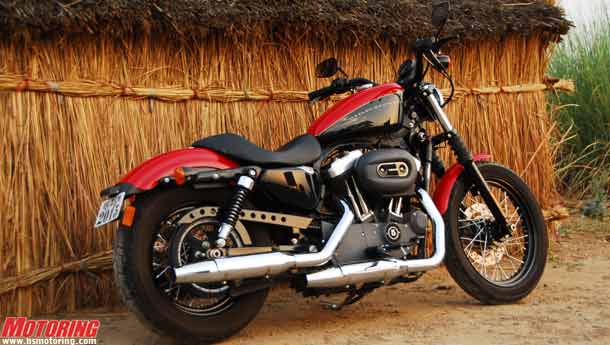 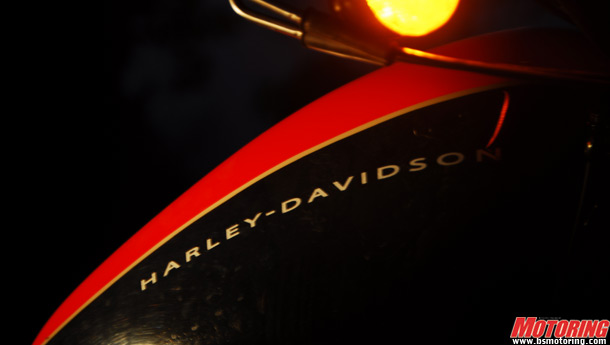 I can't believe I'm saying this: You can't judge a Harley-Davidson by normal standards. They are more than just motorcycles, as you all know. The same could be said of many other creatures of the two-wheeled kind, but there's something about Harleys that sets them apart from the rest; these motorcycles built for American roads are loved by people all over the world. Perhaps it's the history that every Harley clings on to for dear life. Perhaps it's the coolness that only a Harley can exude. Whatever it is, it works. So how does one evaluate a Harley? Here's what I think.   LEAN IT ON THE STAND...

...take a few steps back and let your gaze trace the Nightster's outline. Minimalistic and evocative, the Nightster plays the sweetest tune on my heartstrings. Harley's heritage is on emphatic display here - the peanut tank is as Harley-Davidson as the Great Wall is Chinese. There's the old-school two-tone paint job with blacked-out motor and wheels. There's the spoked wheels, fat tyres and of course, that V-twin Evolution motor with dual exhausts on the right side. Doesn't it look just right? The single seat promises undivided attention and the Nightster seems to demand the same from you. The tiny front fender and the chopped rear unit conjure up images of those hardcore SOBs who roamed on American highways, giving birth to the Harley legend. Among other things, of course.

The exhausts, pushrod covers and heads are the only substantial bits of chrome, so you can gaze at this Harley in the afternoon without going blind. It looks, in a word, hot. And yet, it doesn't shout out for attention. What it does is invite you to get on and thumb the starter. Reaching out to the wide 'bars, I do just that and with an almighty shudder, the Nightster awakens. A giant torrent of vibes thunders through my body. I can almost hear my heart changing its beat to 'potato-potato-potato.' There's only one thing left to do as I disengage the surprisingly light clutch and plonk the five-speed 'box into first cog.   WHACK IT OPEN...

...and hang on as the Nightster barrels down the arrow-straight highway. I'm leaned over that shapely tank, so that my head is line with my arms on either side and my knees out in the wind. This is a sporty riding position, but not the conventional kind - think 'flat tracker.' Before long, a corner presents itself and I wish I could let my inside leg hang out and bring the rear around, spinning wildly in a beautiful powerslide. If wishes were horses, I'd have a stack of wasted tyres. Sigh. Instead, I lean it right over and discover that the pegs have a strong affinity for tarmac. The Nightster is a nimble number and is great fun in the twisties, the limited peg clearance notwithstanding. Now don't get the idea that you can dive down the inside of your mate's supersport bike in a corner. But you're welcome to try, I guess.

However, there's a chink in the Nightster's armour - ride quality. The stiff suspension that makes the bike a great handler coupled with the sit-up-and-beg position simply guillotined my back. I found it difficult to spend more than an hour in the seat without stopping and jumping off the bike to give my back a break. Apart from that, there's nothing I can complain about. The fat Dunlops grip well in corners and under hard braking, while the brakes provide ample feedback. The fact that any feedback from anywhere gets through those vibes is a half-miracle. Kidding.   Harley Davidson doesn't give out official bhp figures, but glancing at some American mags who've dyno-tested the Nightster revealed the number to be around 60 bhp. Not too much, then. But more importantly, torque is a claimed 10.91 kgm at 4000 rpm, enough to make the rear tyre give up its dignity and beg for mercy. God knows how hard I found it to not do a massive burnout. Others still have to test the bike, you see. But God knows I gave it the stick and the Nightster was more eager than I'd expected. Hard acceleration makes the Nightster torture the rear Dunlop to 100 kph in 5.6 seconds on its way to a top speed of 165 kph. First gear is good for 80 kph, while second takes you to 120, and you're already too fast for Indian roads.

While you're unlikely to take home silverware from a drag meet, the Nightster has more than enough shove to make short work of Indian traffic conditions. It's best between 80 kph to 140 kph, where the torque, short gearing and immediate throttle response allows for brisk progress regardless of which gear you're in. Ridden like this, I can almost see myself owning a Nightster. Almost. But I'd change at least one thing - after 100 kph, the exhaust sound is drowned by the complete lack of wind protection. Even below that speed, the twin pipes aren't exactly making my hair stand on end. A visit to the Screamin' Eagle parts division is in order, then. And also, I'd find a way to make the ride more comfy for the highway where the NHAI's perennial motto seems to be 'Inconvenience Regretted.'   LET THE DUST SETTLE

As I get off the bike after a hard 200 km, I'm torn between being objective and getting carried away. There's a lot of things to love the Nightster for, but blazing speed ain't one of 'em. Ride quality can be a lot better too. However, the Rs 9.95 lakh, ex-showroom, Delhi, price tag gets you a motorcycle...sorry, a Harley-Davidson that is well-built and an involving ride in every way. The vibes, the clunky gearshift and the bags of raw, almost agricultural feel from every component give the Nightster a truly unique charm. It's old-school cool at its best and I love it for that.