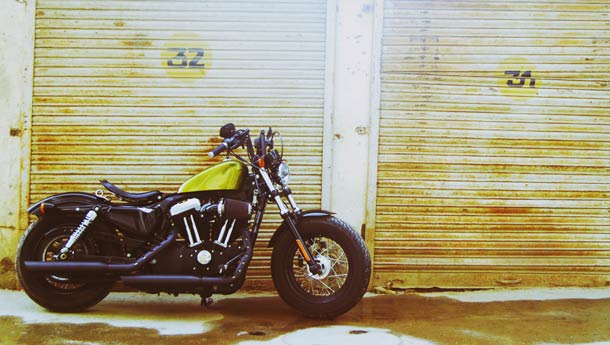 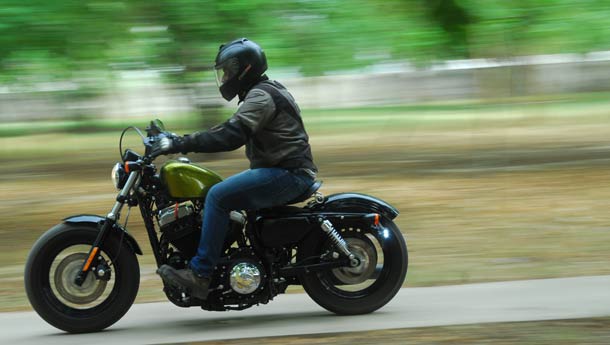 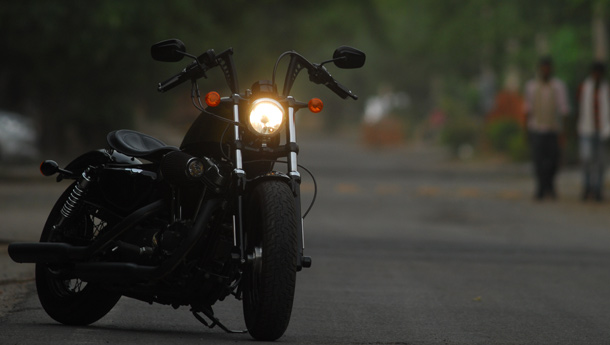 It’s like AC/DC’s Phil Rudd drumming right beside you. Or maybe it is like Keith Moon from The Who. In fact, you might as well be in his bass drum, because every time each of the two humongous 600cc pistons ignite gasoline and hammer down on the crank sequentially, your ears pop as the raucous exhaust note shoots off every building and wall in sight. It’s ‘Thunderstruck’ at volume 11, with ten stage speakers around you. The 1200cc V-Twin is rumbling about like an angry terrier chained down in a little cage and it barks and backfires, lodging a quick one-two in your face like Muhammad Ali every time you turn the throttle to a stop.

The minimalist seat doesn’t help and there’s nothing to grip with your knees either, barring the scorching hot rear cylinder head, which I wouldn’t recommend. When this Milwaukee twin lets loose a mountain of torque, the only thing you can hold onto are the bars and that doesn’t work wonders either because you end up twisting the throttle even more. There’s only one way this motorcycle makes forward progress – loudly, quickly and with a rider who’s barely hanging on. It’s loud‘n’proud in every way possible, made in a way only Milwaukee can and if motorcycles are judged purely by how they make the rider feel, this one is right up there.

Now, the definition of bobber has changed quite a bit since the trend started way back when. The earliest classic bobbers can be traced back to the 1920s, with rider-customised motorcycles in the States (where else?) and later, the first factory bobber came to the market in the form of the D-Series from the big H-D. The basic POA when it came to building a bobber was to strip it down, can the front brake and the front fender, and to chop or ‘bob’ the rear fender. The trend started as riders turned up on their stock everyday bikes at the weekend races, stripped them to go faster at the races and put everything back on once they were done. Chrome wasn’t cool but a flat-black or a flake paint scheme was. Running vintage kit, wrapped pipes and the grungiest of parts was totally with-it. The idea was to get a bare-bones, old-school look on a bike that was ridden every day.

With this Forty-Eight Custom, the modern interpretation of the bobber, Harley-Davidson has inculcated many of the trends that define a classic bobber. This oxymoron-sounding factory customised version is more of a show bike – which it is actually; this is their Auto Expo show piece for the road, it gets so much attention, it’s almost unfair on other motorcycles. The candy flake paint on the peanut tank shows that H-D’s paint quality really does stand up to the hype. Just to clear things here, I would personally pick the purer, blacked-out stock Forty-Eight over this one, albeit with the LOUD Screamin’ Eagle pipes, which could well wake up the dead.

Its minimalist but thoroughly effective styling is purer, it’s just as much fun to ride and it’s cooler because it’s not trying hard to impress. This custom version though, is on the exact opposite side. In a place like Delhi, where attention is paramount (and always desirable), this thing just works. The seat is now a nice retro-styled sprung piece, the bars are now vintage-styled ape hangers which are placed forward and less comfortable than stock, and you’ll spot little custom details strewn all over the bike. The Yank motor now breathes better thanks to a free-breathing air intake and ‘Street’ Screamin’ Eagle pipes that are loud enough to drown out the sound from a KISS concert. There are also some rather naff ‘Live to Ride’ insignias all around that we’d rather not comment on. Still, its beefy, bare-bones styling truly hits the spot, and even more so on the stock bike.

But all that customisation is but a sound check. The real show begins when you spark the motor into life. Ear-splitting, reverberating, thundering life. What can I say? It’s an incredible, refreshingly new riding experience. Not being big, the motorcycle just fits you right and just sitting on it makes you feel cooler than Brad Pitt in Ocean’s 11, ‘feel’ being the critical word here. Just having that bad-ass motor snarling around in its metal cage under you, the pleasing rhythmic vibes that are transferred to you through the bars, the seat and the tank, the charming potato-potato idling note – all of that, it’s just wrong looking at it from a solid, clinical engineering perspective but its feels oh-so-right. Even the mechanicals haven’t been strait-jacketed into refinement, something a machine-head like me appreciated. Sophistication or refinement isn’t exactly on top of the priority list, let’s put it that way. And in this case, that’s a good thing. No ten-tenths here, just pure, distinctive street-biased riding glee.

Even though it’s portly at 257 kilos wet, the 11.1 kgm-rated twin hammers down enough torque to the rear contact patch for you to sit up and take notice. Delivery is crisp while the spread is linear. The various parts come together to form a characterful sum in this case, right from the sound to the feel to the power delivery. And here I am saying it – there are few sounds as naturally appealing and awesome as the H-D soundtrack, the sound of rolling thunder. Sticking it into top at 40 kph and twisting the throttle wide open results in pure joy – you can feel each big piston firing down on the crank, the motor slowly chugging its way up the revs, not unlike an old steam train pulling a massive load. Beautiful. This road-roller of the motorcycling world holds a 130/90-16 up front and a 150/80 at the rear, making it reasonably stable on smooth highways but fidgety over bumpy surfaces.

It rides too hard for it to be comfortable, something Harley needs to address especially for India. It feels heavy to turn-in, for obvious reasons, but holds it line well once tipped over and while it’s far from agile, for what it is, it’s reasonably corner-friendly. Tooling around in the city is what it does best, with the occasional dash out of the city.

Harley-Davidson has taken the smallest of its line-up – the Sportster platform – and turned into a deeply cool urban tool. It’s expensive at Rs 8.5 lakh, ex-Delhi (plus Rs 2.5 lakh worth of custom goodies on this particular one) and it won’t be as fast or as quick as or sharp as any of the Japanese bikes, but in terms of pure riding experience, it’s sheer joy. We’d save a lot of money by bypassing the shiny stuff and just sticking to the performance goodies, of course. Ridicule the Yanks all you want for their crudeness but when it comes to some good ol’ fun, just like muscle cars, few do it better.