Hands-free in a hatch 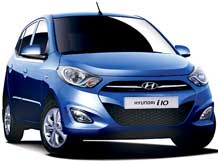 Hatchbacks are designed and manufactured in such a way that they are spacious from the inside, have enough boot space and are practical enough to drive around the city without worrying too much about parking space. Nowadays, looks too make a difference. And while hatchbacks may be the ultimate affordable family cars, demands have change over time. Automobile manufacturers are now trying to meet new expectations. City roads are chaotic with everyone creating his or her own lane. With millions of office goers who are in a hurry to reach their work place on time, the proverbial rush leads to curses all round. The traffic is stop and go and the changing of gears is incessant. To cool tempers, hatchbacks now come with automatic gear transmission. It's hands-free driving, even in dense traffic.

Earlier, automatic hatchbacks not only cost a premium, but the gearbox too lacked finesse in performance and the engine returned a low mileage. But things have improved a lot now, and manufacturers are equipping their auto hatches with the best of technologies. Cars with automatic transmission use up more fuel than normal. But even in this area, there have been improvements. The three most popular auto hatches in India are Honda's Brio, Maruti's Ritz and Hyundai's i10.

Clutchless experience
The Brio stands out among the three where design is concerned, as the Ritz and i10 are more of the conventional tall-boy cars. The jury is still out on Honda's entire-glass rear windshield but actually it gives the Brio a radical edge over the others. Plus, it's a big help while reversing. Step inside and the dimensions are smaller than those of the Maruti and Hyundai, yet four adults can easily sit together. The Brio ensures that the front and rear passengers enjoy a comfortable experience as the seats provide excellent back support. The dashboard design is youthful and very contemporary. This cute and eye-catching hatch manages to attract both men and women.

India's favourite automaker Maruti has also joined the auto-transmission race and it has Ritz as its contender. The hatch initially sold in respectable numbers but in time it disappeared amid the competition. The Ritz received a mid-life revamp job and surprised most with sharper looks, including a V-shaped bonnet and an Audi-like grille. This car's USP has always been space - good for five adults. Let's be honest, no one in your locality will be jealous of your owning the Ritz, but it is second to none when it comes to practical use. ( SPECIFICATIONS OF MARUTI RITZ, HONDA BRIO & HUNDAI i10 )

The most popular in this small set is Hyundai's i10. It has always been an all-rounder in terms of cabin space and is one the easiest cars to drive during peak traffic time. The steering wheel is responsive, so early in the morning you are not labouring your way through traffic. The i10 has well cushioned seats and but the rear ones feel a bit too straight. Like the Ritz, the i10 too is more about being a functional car than a glitzy one.

Hands-free ride
The Brio is for enthusiasts because it has a free-revving engine and is always eager to get ahead of the pack. Being a typical Honda, the 1.2-litre i-VTEC engine is responsive and has a very smooth gear transmission. The Brio is the only hatch among the three that comes with a 5-speed box, which ensures power delivery is equally distributed. But you will feel the lag at slow speeds. The ride quality is not only the best among the three cars, but the Brio gamely sails over most potholes too.

The Ritz is powered by the VVT K-series 1.2-litre engine which is mated with a 4-speed automatic gearbox. Even though the Maruti is at par with the Brio, it is a mellow being and doesn't race all the way towards the redline. The gear box doesn't shift as quickly as the Honda, but by no means does the Ritz feel lethargic. The Ritz can be a noisy affair as its setting is "tall gearing", that is, the RPM needle has to go further before the gear changes. In slow traffic, one wouldn't even notice this, but on a clear road it can be a bit of drag.

The i10 is the least powered of the three cars, but because the Kappa2 engine is a prompt responder, it is always a pleasure to drive at low revs. The four-speed gear box ratios are tuned perfectly for traffic duties. The car gasps for power when it picks up speed and that is when the tall-gearing speed box feels restrained.

For the best ride
If you want a spacious car with fairly decent power then it is the i10. It is also backed by the second-largest service network in India. The i10 comes loaded with features and has comfortable front seats.

The Ritz is another tall-boy option, but lacks many features though it is spacious and has a comfortable ride quality. If you swear by Mauti, then go for it. Otherwise check out the other options.

The Brio is the most fun car to drive and has a responsive 5-speed gear. It looks great from the outside and the interior build quality is top notch. You may have some issues about the space, but this is the perfect small car with auto gears for the city.