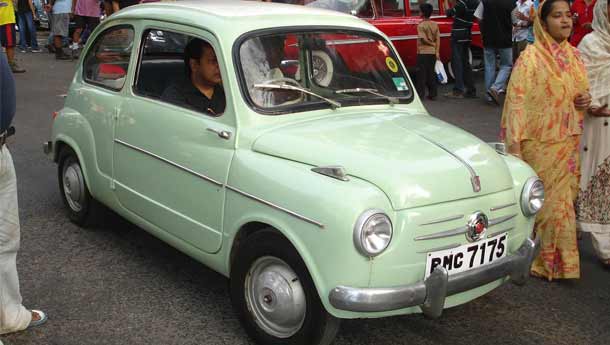 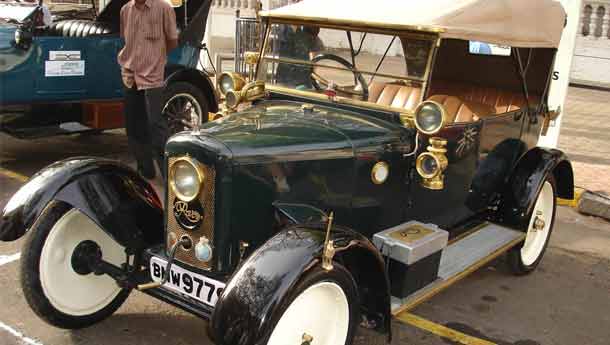 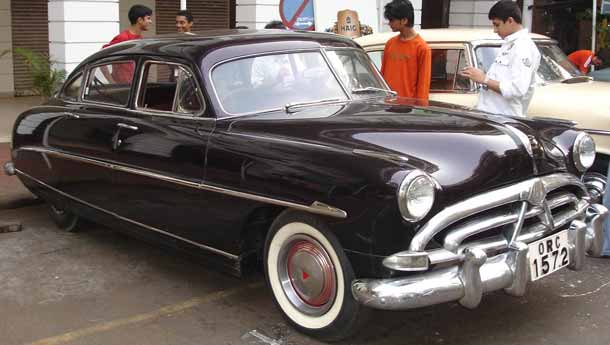 BEFORE THE 500
1957 Fiat 600
The Seicento was Fiat’s first rear-engined car, though still water-cooled. The 633cc motor pumped out a measly 21 hp, but managed a somewhat respectable 95 kph. Dante Giacosa’s master-stroke, it was also the basis for the Multipla, possibly the world’s first MPV. This example was entered by Dr Pushkar Mangeshkar.

AIR,THERE, EVERYWHERE
1959 Chevrolet Bel Air
lThe year 1959 was very significant for the US. Buddy Holly died in a plane crash, the Twilight Zone premiered on television, Barbie made her first appearance and the Big Three went all guns blazing with their ‘59 lineup, showcasing the wildest tail-fins ever seen. While Cadillac had their trademark vertical fins, Chevrolet decided to do things differently with dorsal fins spreading out giving birth to the super cool cats-eye taillights. This immaculate example is part of Hormusji Cama’s fantastic collection.

JUST FOR A LARK
1965 BUICK
General Motors decided to celebrate 50 years of Buick in 1953 by launching a limited run of the Skylark, a luxurious
top-of-the-line cabriolet. Encouraged by its success, they proceeded with full-scale production in ‘61. Come ‘65 and Buick launched the Gran Sport option, which went on to become the Buick GS – a legend in its own right. The car featured here, belonging to Pravin Choksey, dates to 1966, when the engine lineup included a 5600cc V8, belting out 220 horses.   MOVE OVER, IT'S ROVER
1923 ROVER 8 HP
This delightful little uniclops curio is powered by a transverse twin-cylinder aircooled engine. Originally a John Young Sangster creation (who controlled Ariel), Rover bought the rights in 1919, and sold a respectable 17,000 units till 1925. Note the large cooling vents on the side of the bonnet. This immaculate example is owned by Fali Dhondy.

WORTH ITS EIGHT
1928 CADILLAC V8
Cadillac were the pioneers of the V8 engine, and were the first to launch a production V8 in 1914. Naturally, they weren’t done working out the kinks, while their competitors had a field day shouting it out from the rooftops. This led MacManus advertising agency to publish the famous ‘The Penalty of Leadership’ ad for Cadillac, which ranked in the top 50 all-time great advertisements in history in a 1998 survey. This behemoth 1928 example took top honours at the event, winning the concours d’elegance.

MOVE OVER, IT'S THE QUEEN
1961 ROVER P5 MARK 1 A
Upendra Nayak’s freshly restored Rover is of particular historical significance – besides being offered with a healthy 3-litre six-cylinder motor, the P5 was standard issue to British prime ministers right up to Thatcher. She chose a Daimler, though the Queen herself has retained her P5.   CLUTCH YOUR HEART
1953 HUDSON
Hudson was best known for its ‘step-down monobilt’ design. This meant the body wrapped around the chassis rather than sitting over it, giving the car a very low and sleek look, supremely comfortable ride and superb road holding. The car forms part of Rasool Hussein’s enviable collection.

CENTURY MARQUE
1908 WOLSELEY TOURER
It’s a little known fact that Wolseley has origins going back to 1895, when a certain Herbert Austin was working at the Wolseley Sheep Shearing Company. While he left in 1905 to found Austin, up to 1910 it was actually named Wolseley-Siddeley, part of which went on to become Armstrong Siddeley. Abbas Jasdanwalla’s perfect 1908 example came from the royal family of Murud, and celebrated 100 glorious years at the event, and even got a special Happy Birthday played by the police band.

GEE WHIZ
1981 SUZUKI SC 100 GX
Amongst Suzuki’s first cars to be exported, this was the original Cervo kei-car, badged the SC100 for the UK market in 1979. Weighing just 655 kg, yet available with a 970cc rear-mounted four-cylinder engine, its sprightly performance and sporty looks earned it the name ‘whizzkid’. Entered by Freddy Irani.