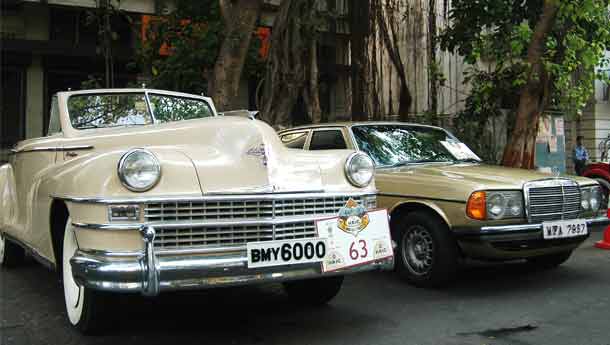 The 1930 Ford Model A belonging to VB Pandit was one of the show stoppers, with the owners dressing up in traditional 1930s fare. One of the first Fords to have a typical Accelerator-Brake-Clutch and transmission layout, the Model A was available in 15 body styles, a record for its time. Sameer Kadam's 1936 Adler Trumpf exhibits flair as it trundles down across Jehangir Art Gallery. The small 4-cylinder engines were favoured by many racing drivers in its day and was successful even at Le Mans. The 1934 Humber 16/60 from Harit Trivedi might have gone unnoticed by many, but it was one of the first cars to be developed under then new owners, Rootes. Humber of course would go on till 1979 before Chrysler sold it to Peugeot who re-named the company as Talbot. Sameer's other car was a beautifully maintained Jaguar 2.5-litre saloon, seen here. Cars from present day partners (not for long) DaimlerChrysler made their presence too with this 1947 Chrysler New Yorker, sharing space with a 1981 W123 Mercedes-Benz. The New Yorker was probably the longest running nameplate in American car history while the W123 made its mark with technical innovations like ABS, a collapsible steering column and driver airbag.