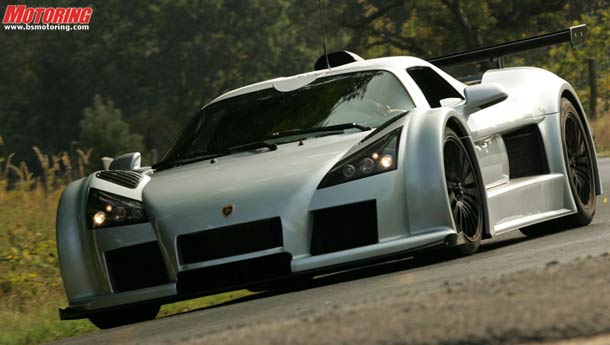 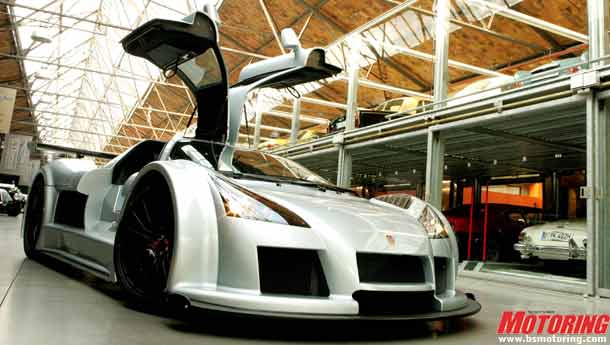 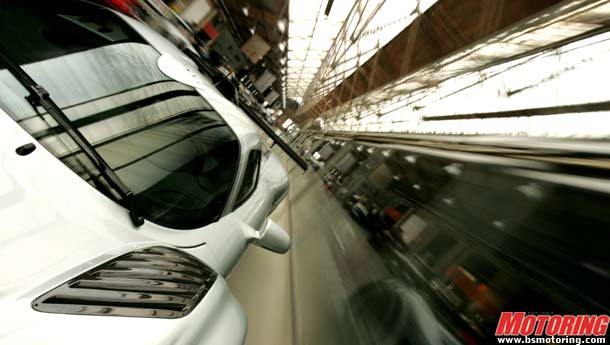 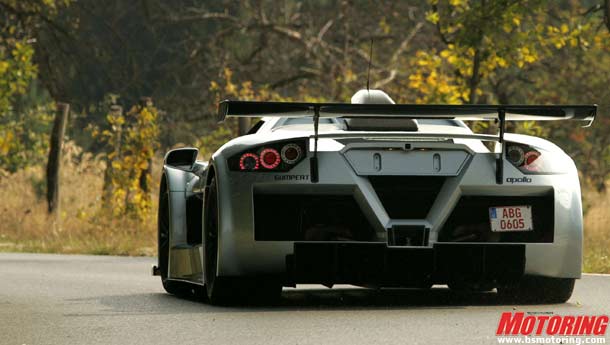 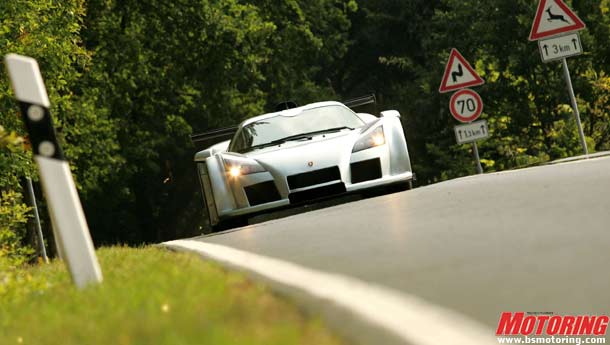 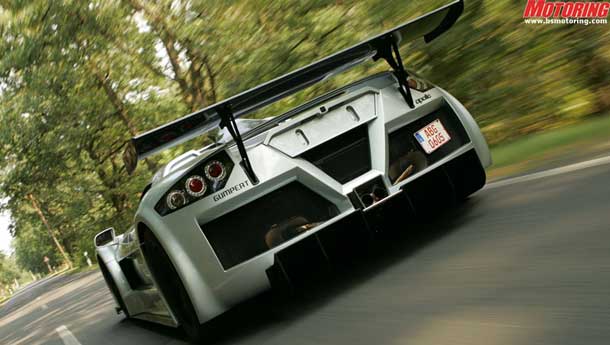 For 28 years, West Berlin was walled in to keep the forbidden fruits of Western Europe out of the austere Eastern Bloc. Would-be escapees had to cross the anti-vehicle trenches and an open plain - affectionately known as the death strip - and then scale the wall itself before the dogs or sniper’s bullets ended their bid for freedom. The wall was ugly, oppressive and cast a sinister shadow of fear over the city, but it was an engineering masterpiece in its own way.

Its sinister purpose and brutal straight-edged look came to symbolise the Eastern Bloc. And now we’re back, exactly 20 years after the wall came down in a similarly vicious, sinister and downright destructive supercar, the fastest car that nobody has heard of: the Gumpert Apollo Sport.

And I am thinking about escape, too. The car is hemmed in on every side by Berlin traffic, a bus runs ominously close to a frighteningly expensive wing, a cyclist sits ahead and a slip on the clutch could smear his yellow jersey all over the road and bring this test to a premature halt.

I feel for the bite point with bomb-disposal levels of care as the Apollo trickles gently after the fast retreating traffic. I’m slower than everyone else, I am sweating and an angry Golf driver is venting his frustration on the horn.   Just weeks before our arrival, the Apollo Sport mastered the old Nurburgring in 7m11.57s, taking the production car record in the process with Florian Gruber at the wheel. At that moment it became more than an eccentric-looking rocketship - it could rightfully claim to be the fastest point-to-point car in the world. It is fully homologated and is considered a full production car, but that’s only on paper.

Because this €400,000 hypercar is a car to be seen in, it has to go to the harbour club and society party, as well as the race track, and it has to handle the inner city. So that’s where we intend on driving it.

We meet the car at the company’s new sales office in the Meilenwerk building. This converted factory now houses a priceless collection of old timers and instant classics like the 300 SL Gullwing and Ferrari Enzo. Yet even here, the Apollo Sport stands out from the crowd. It wouldn’t win the beauty contest with the assembled exotica, but it looks like it would break all their legs with a pool cue in the back room before the contest could take place.   t is an orgy of straight edges, even down to the vents slashed into the front and box-section sides. Even the back looks like it was sketched with a ruler and scalpel. Every part of the car is defined, tight and precise, bodywork draped over components. It’s a near military supercar in form and function.

Roland Gumpert, the man who introduced four-wheel drive to Audi’s WRC programme, and Roland Mayer, a crack Audi tuner who fancied something more substantial, set about creating a supercar with enough downforce to drive on the ceiling at full speed. This is a shrink-wrapped uncompromised racing car with a number plate and I can’t even get in without unhooking the removable steering wheel.

The minimalist approach is mirrored on the inside, which is a mass of carbon-fibre, two bucket seats, a giant sequential lever, three pedals and a few dials. There isn’t a rear view mirror, because there’s no rear view and grabbing the leather strap and pulling the surprisingly heavy gullwing door down takes real effort. Reverse, meanwhile, takes pure belief in the camera that feeds into the navigation system’s screen. That almighty gearshifter is a sequential six-speed, but it comes with a clutch to provide greater control and finesse.   As I finally fire up the 700 bhp V8 and a hollow bark fills the halls and bounces off the walls and rafters as the 4.2-litre clears its lungs like a heavy smoker, spitting unburnt fuel on the highly polished floor. I lift the front end of the car 40mm with a hydraulic system and then roll out of the perfectly surfaced Meilenwerk into the outside world. On to crippling hard cobblestones.

The Meilenwerk is based on an old industrial estate that has been protected and restored. So the old road surface remains. In a normal car this would be a charming interlude. In an Apollo Sport it is like driving through an earthquake.

For the Nurburgring record, Gumpert softened the car to give it the suspension travel to cope with the Nordschleife’s wicked bumps and kerbs. This one bounces and struggles on the cobbles and every rut is transmitted through the barely padded racing shell that forms the seat. It’s almost painful, but the old world meets the new at the end of the road and real tarmac takes over.

Even here the massive tyres grab at every tram line, painted line and fault line in the road. Downforce doesn’t help here, we’re joining traffic moving at 20 kph, but the mechanical grip is immense and in town that can work against the Gumpert. It never quite deviates from the straight line, but there’s a riot of noise, jolts and bumps coming through that carbon-fibre monocoque built into a chromolybdenum spaceframe as each tyre taps out the surface.   The clutch and sequential lever are heavy, too, throwbacks to the iron age of supercars from 20 years ago. Both are race bred, so the pedal needs a firm shove and the lever needs pulling past a point of central resistance to get the next cog. It’s a manual workout in there and the optional aircon is a life saver. Without that box ticked, this car would be an oven, with no way to fight the heat on offer from a 700 bhp, twin turbocharged engine just inches away.

Of course the car is more at home on the race track, where the 85 kgm of torque can kick in and send the Apollo Sport scorching to 96 kph in 3 seconds flat, 200 kph in 9.1 seconds and a top end speed of 352 kph. And as a brief excursion to the city limits, over the railway tracks and on to a backroad told us, that comes with so much explosive force it feels like your face is melting and the noise is like an olde world race car as the metallic roar seems to reverberate round the cabin.   The 1,197 kg Apollo Sport feels so direct, so responsive, that even the Ferrari Enzo feels dimwitted by comparison and it ripped the competition apart on the high speed bends as a trick chassis and 1,700 kg of downforce kept the car on the road at outrageous speeds.

None of this helps me now, though, in the depths of the Berlin rush hour, plotting an all encompassing course around the city to end in its main shopping district. Now I have only frustration, unusable power and I’m a foot jerk away from a major accident.

A usable, smooth powerband helps, as well as the depth of feel on offer from the AP Racing six-pot steel brakes, as we pass the lines of suburban grey boxes that pass for shops on just a nuance of throttle, moving with the traffic. This is the functional Berlin, the utilitarian square sided buildings almost military in their conformity. The Apollo is built down the road in Altenburg, but its angular, razor’s edge look, the complete economy of style, fits comfortably here.   The almost infinitely variable Racelogic traction control system is cranked to full and yet still I can feel those massive rear tyres flailing against the surface before the computers cut in to kill the power. It’s disconcerting at first, but I learn to trust the car as we flow through the city and along one straight of the old Avus race circuit to the south-west.

This track is a caricature of the simplistic design ideals: two straights that have long since become part of the public road and a hairpin at each corner that has been adapted into traffic islands, yet it hosted an F1 race in 1959 and DTM until the mid-90s.

Racing came to an end in 1999 as closing the roads became impossible and the only real landmarks are the race control tower that is now a restaurant and hotel and the dull, grey, weather-beaten grandstand that fits the perfect stereotype of Bauhaus architecture. Cold, unwelcoming and monolithic, this landmark also brought our adventure to a total standstill.

With gridlock on the way out of the city we turn back in, heading towards our final destination, the Ku’damm in Central Berlin. This is as elegant as the city gets, the home to the designer labels and sometimes referred to as Berlin’s Champs-Elysees.   We pass foreign embassies, where glorious mansions with men with machine guns, in a variety of national military dress, cast one eye towards our rocket cruising past. The buildings are still imposing, but there is a subtle shade of artistry, too. As the traffic starts to flow once more, I can leave the clutch alone and roll along in second or sometimes third, using the torque not the turbos to row along and we start to see those same qualities in this brute of a car. Kept below its flashpoint of 3500 revs it is calm, controlled and docile, perfectly engineered to take whatever the city can throw at it.

And as we ease through Berlin we get the chance to see just how much of an impact this car has on Joe Public. It is immense. Just 40 Apollos are out there in the world and hardly any have been spotted on the open road. So its sledgehammer appeal is undiluted by familiarity.

Waving back, tooting the horn and an occasional burst of revs to satisfy the growing throng at traffic lights is all part of the Apollo Sport experience as we close in on the Ku’damm. Having tuned out the white noise of the road surface through the chassis, the grip on the wheel is fingertip light, the car obediently following the slightest nudge on the wheel.   This is where the east and west sides of the city meet and it’s easy to imagine entering the former Eastern Bloc is like dropping off a cliff of civilisation, that the road will suddenly move from perfect asphalt to donkey track, but that doesn’t happen. Since the unification of Germany the West has pledged two per cent of every pay packet to rebuilding East Germany, so now the road through Berlin is simply a glamorous tree-lined shopping mall.

It is a typical capital city plaza now, rather than a frontier, and only the Brandenburg Gate remains as a reminder of the dark days.

We turn left past the famous Nike flash, a unilateral symbol if ever there was one, and snake past the 1,000 disbelieving eyes to the chain link sculpture simply entitled Berlin. Gucci, Bvlgari, Chanel, Louis Vuitton, Valentino, Lacoste, Tommy Hilfiger, Cartier, Hermès, Swarovski and Aston Martin all have stores here, and once again the Apollo Sport fits right in. Its €300,000 base price means it is beyond the dreams of most mere mortals. The Apollo Sport is a plaything for the rich that already have a Ferrari and a Lamborghini in their garage and crave a different buzz.

Waiting for them is a personification of Cold War design ideals, a minimalist hypercar with the technical skills to stick to the ceiling. It can lap the ’Ring in record time and make it to the centre of the busiest city, too. Not bad for the fastest car you have never heard of.