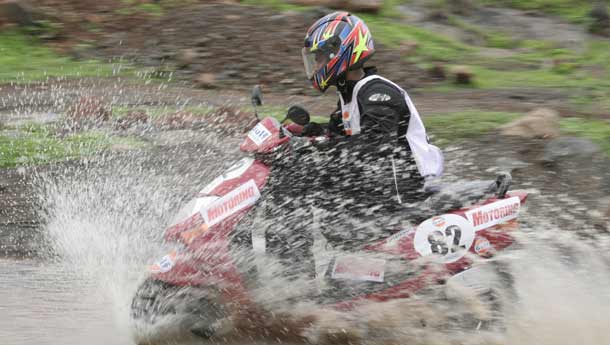 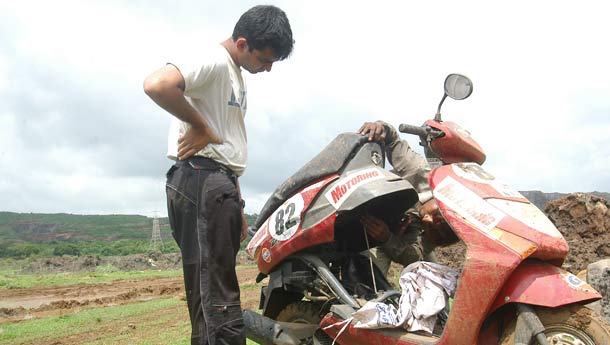 On a terrain that would make a Gypsy cringe, the throttle on my Honda Dio is pinned to the stop. The view from my helmet visor resembles onboard roller-coaster footage at best, as I bounce off from one rocky surface to another. Make that an extremely bumpy roller-coaster. The Dio’s suspension isn’t taking this too well. In fact by bottoming out at both ends, it isn’t taking it at all. Just then the Dio’s front tyre strikes a stone that’s sticking out like a sore thumb leading to the highest point in my two-wheeled competition career. Well, at about five feet above the ground it was a jump that would have made the muckiest motocrosser proud. The difference, of course, was that I and the Dio were anything but one.

And as the ground struck hard, reality struck even harder. Scooters are meant for you to go buy vegetables or make goddesses out of Italian women – not emulate Jeremy Mcgrath.But this is the Gulf Monsoon Scooter Rally and ‘scooter’ is the operative word here. This event has been running for the past eighteen years now and is as regular a monsoon feature as the Kanga league. Now, you might think that they should run this event for motorcycles – and you aren’t too far off target, but we’ll come to that in a bit. Meanwhile, let’s return to my er... leap of faith.

I was expecting the Honda to collapse into a heap of mangled, mud-splattered bits but it didn’t. The jump had only resulted in a Dio shaped hole in soft mud and a thoroughly shaken rider. But the adrenalin was flowing thick and fast, overpowering good ol’ common sense and frayed nerves and before I knew it the red-competition spec Dio was blitzkrieging puddles at break-neck speeds yet again. Come to think of it, the course is so bumpy, the term ‘break-neck’ can be used rather loosely.

To tell you honestly, when you are actually giving it everything, you don’t ride the scooter as much as hang on for dear life. It’s like riding pillion with yourself and everytime you keep the visor open, you get mouthfulls of muddy water. It might sound like I am complaining. But I am not. I was having an absolute ball. However, time flies when you are having fun, and going by how quickly the first stage ended, I certainly had my share of it.

At this point, I would love to tell you that my exploits on the Dio had placed me somewhere at the top of the standings, but I can’t. As ridiculous as this may sound, the marshals couldn’t reach the time control on time (and to think it’s named so!) and so the first stage was cancelled. Oh bugger! Anyway, time to head to service where mud-splattered helmets had given way to seemingly dopamine fuelled, king-size grins.
Now the event itself (because it involves scooters) might be unconventional but it’s no-less competitive. ‘Ah, I’m just here to have fun’ might be the de riguer line for everyone, but each one of them is riding on knobblies and transforming shopping cart equivalents into mud plunging excavators capable of giving yellow-blooded JCBs a complex. Then again, I guess it’s wrong to even expect a bunch of guys riding vehicles with stickers on them to ever grow up.   Coming in to service also gave me a chance to do a thorough run-down on the Dio. The fall hadn’t done much damage to it, but boy had it been through the work-out of a life time. Especially when its previous owner had done just about five-thousand kilometers in four years. In the sixty-seven hours that I had it, I had put it through the equivalent of a military boot camp.

More was yet to come. After a long palpitating wait the flag went down again. Yet again it was chaos. Absolute and utter chaos and this time round I was prepared to find half my tongue in my lap. Until I came across a swamp big enough to swallow a small freighter. Okay, it wasn’t that big but it was big enough to swallow my Dio, leaving me hopelessly and profoundly stuck.

Picking my way across foot deep mud and slush, my Dio suddenly sinks downwards and now sits immovable upto its crankcase. I try the starter but the battery is too weak to turn the motor that’s now probably smeared in mud. And the kick? Well, that’s stuck as well. I try pushing the damn thing out of slush, making noises like a boxer firing jabs, but can’t get the thing to move. Soon, I am making noises like a boxer taking them and then it’s game over. Total tally: one number bruised ego, one number bruised shin, one number seriously stuck Dio.

But having taken part, I now understand the rationale behind a scooter rally. You don’t have to necessarily have a screw loose to take part, but it certainly helps. That’s why it still attracts national motocross champions – both past and present. As for the motorcycle bit, well, I recced the course on one and it’s just waaaay too dangerous, at least on stock tyres. Perhaps, then it might gain legendary status. Either ways, this event really does have the makings of one, at least in our country. I just wish they would make it more sophisticated in terms of timing competitors and stuff.

As for me, well, I walked the course more than I rode it, but it was great while it lasted. Now to come back next year and win!