Ashok Leyland (ALL) ended 2017-18 on a positive note, clocking a higher than expected 40 per cent rise in net profit for the March quarter (Q4). The momentum is expected to continue in the medium-term as ALL focuses on higher tonnage trucks, and growth triggers such as pre-buying ahead of the BS-VI norms and the vehicle scrappage policy.


ALL’s Q4 net profit at Rs 6.67 billion, beat analysts’ estimate of Rs 6.42 billion. It is a key beneficiary of the sharp recovery in the higher tonnage vehicles (above 25 tonnes load capacity), which are gaining traction led by the government spending on the infrastructure sector and restrictions on overloading, said Abhishek Jain, analyst at HDFC Securities.


In Q4, ALL’s growth, in the number of units sold, was 15 per cent as against TIV (total industry vehicle) growth of 19 per cent. Margins and revenue were higher, owing to the shift towards higher tonnage products which bring more value for lesser volume. Thus, revenue grew by 32 per cent year-on-year to Rs 87.72 billion and EBITDA margin came at 11.8 per cent (up 80 basis points).


Gopal Mahadevan, CFO, said ALL maintained double-digit growth, and at the end of 2017-18, it is cash positive with nearly Rs 30 billion surplus; and the focus continues to be on working capital and operational efficiency.


For the full year, despite challenges, including the ban on BS-III vehicles and high competition, ALL’s revenue grew 30 per cent and the market share was 34.2 per cent at the March-end. This, despite TIV in the north and the east, which are ALL’s non-traditional markets, growing 20 per cent but in the south growing only 6 per cent.


Commodity prices, price adjustment credits for BS-III and other factors, however, marginally weighed on EBITDA margin, which came in at 10.4 per cent for 2017-18 against 10.9 per cent a year earlier. 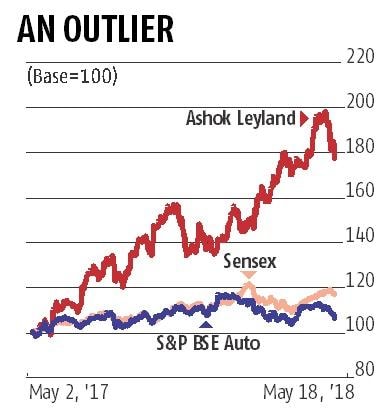 Dasari is bullish about the next three fiscals. In 2018-19, volume growth is pegged at 10-12 per cent, driven by infrastructure spend, while Euro-VI (standards) pre-buying and the scrappage policy should aid sales in the following years. The ban on 15-year-old vehicles alone should translate into 700,000 vehicles or two years’ worth of demand.  “We are clear that we should not buy market share, but focus on profitable growth. In 14 of the last 15 quarters, ALL has reported a double-digit margin and we will take  measures to continue the momentum,” said Dasari.


Besides the focus on higher tonnage vehicles, which enjoy higher margins, ALL is ready to change prices based on the commodity price movements to sustain margins.  ALL is also focussing on exports and aims to enhance its 15 per cent share to a third, defence and after-market segments. Given the rally in the past one year, the stock has seen some correction on profit-booking in the past few days. Currently, it is trading at fair valuations, said analysts.


Among major risks are easing of loading restrictions by states, as done recently by Rajasthan and Uttar Pradesh, a change in policy and a sharp rise in diesel prices.