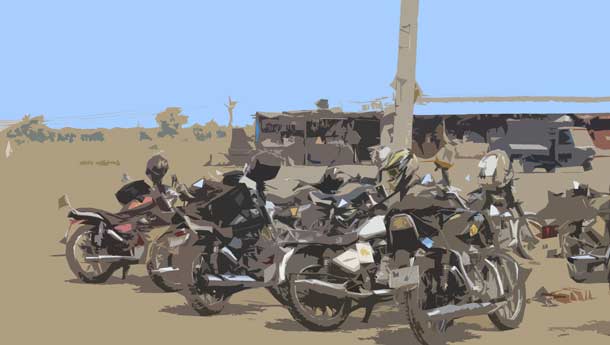 As it turned out, I could only attend the second leg of Royal Enfield’s Tour of Rajasthan this year and even though the ride itself was spectacular - more on that in the upcoming March issue - I was reminded just why I loathe riding as a part of a big group of motorcyclists. It’s not just downright frustrating but it also can be quite dangerous, particularly in the Indian context. It so happens that this occurs a lot more when you’re riding with the ‘enthusiast’ crowd - or actually, the ones who desperately want to be called that - and the following observations are from the years of riding, not just this particular ride. The questions is: where does the problem lie? Well, with a distinct lack of common sense, to start with. You could be the combined sum of J.N Roberts and Malcolm Smith but if you’re planning on passing a truck around a totally blind corner on a mountain pass that’s about as wide as a credit card, you’re going to have it, mate. Even then, those brave passes aren’t a patch on the kind of flamboyant overtaking maneuvers used elsewhere, even on an wide and empty highway. These types that I speak of are so (irritatingly) desperate to overtake that it seems like they get manhood enlargement reward points post every overtake. Maybe then, if they’re willing to risk so much, they may desperately need those.

As the usually do, dimwits have a natural tendency to bunch up and once in their warm cozy comfort zone - which is .002 mm from the other guy’s derriere - they sit there hoping and praying for a pile-up. If you think going straight into trucks with your ‘bros’ is fun, good for you but try not to suck others into it as well. Hammering through villages usually ends up in someone going into a cow or a tractor - or worse still, a human - and these ‘I’m faster’ ego wars never end up doing any good. Absolute disregard for a sufficient margin of error is asking for it, frankly, and when you’re riding in the midst of one of the world’s most dangerous road networks, anticipating potential hazards and adapting accordingly should be high on the priority list.

Thankfully, there are always a bunch of motorcyclists on most rides who know how to make good time and have a good time without being hazards on two-wheels. I’m sorry if bits of the blog come across as a rant but if you’re in the midst of all this, you’ll see why. Group riding dynamics are very different and everyone has to recognize that fact. Eliminating bozos entirely is virtually impossible but if 75% of the group is riding sensibly, the rest usually tend to follow. The trick here is to learn the art of riding at a good pace while minimizing risks to you and the ones around you.